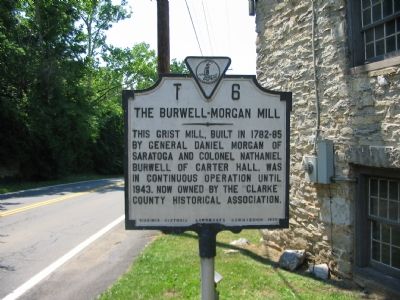 By Craig Swain, July 8, 2007
1. The Burwell-Morgan Mill Marker
Inscription.
The Burwell-Morgan Mill. . This grist mill, built in 1782-85 by General Daniel Morgan of Saratoga and Colonel Nathaniel Burwell of Carter Hall, was in continuous operation until 1943. Now owned by the Clarke County Historical Association. . This historical marker was erected in 1970 by Virginia Historic Landmarks Commission. It is in Millwood in Clarke County Virginia

This grist mill, built in 1782-85 by General Daniel Morgan of Saratoga and Colonel Nathaniel Burwell of Carter Hall, was in continuous operation until 1943. Now owned by the Clarke County Historical Association.

Location. 39° 4.134′ N, 78° 2.291′ W. Marker is in Millwood, Virginia, in Clarke County. Marker is at the intersection of Millwood Road (Virginia Route 723) and Tannery Lane, on the left when traveling east on Millwood Road. Located at the Burwell-Morgan Mill park. Touch for map. Marker is in this post office area: Millwood VA 22646, United States of America. Touch for directions.

Other nearby markers. At least 8 other markers are within 2 miles of this marker, measured as the crow flies. Millwood (about 400 feet away, measured in a direct line); Carter Hall (approx. 0.3 miles away); Greenway Historic District (approx. 0.7 miles away); Blandy Experimental Farm (approx. 1.3 miles away); Long Branch (approx. 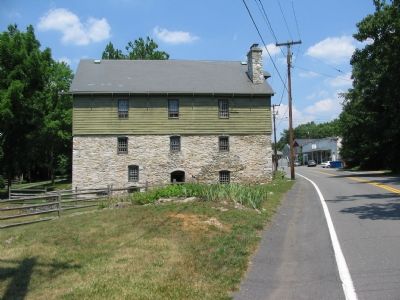 More about this marker. Note on the original marker the inclusion of the county name (Clarke) in quotations. At the time the marker was placed, there was some confusion as to the spelling of the county name, and the historical association’s name was left in quotes. At a later time, someone has removed the black paint from the quotes, de-emphasizing the marks.

Also see . . .
1. Clarke County Historical Association. Select the link to the Mill for details about the mill and restoration. (Submitted on July 12, 2007, by Craig Swain of Leesburg, Virginia.)

Additional comments.
1. Old Highway 50
Millwood Road running past the mill is also known as Old Highway 50, since it was the original path of that U.S. road. It is one of the oldest roadbeds in this part of the country, dating back to colonial times as the main path through the Blue Ridge Mountains at Ashby’s Gap.
— Submitted July 12, 2007, by Craig Swain of Leesburg, Virginia.
2. Two Mills at Millwood
The Burwell-Morgan Mill was the “commercial” 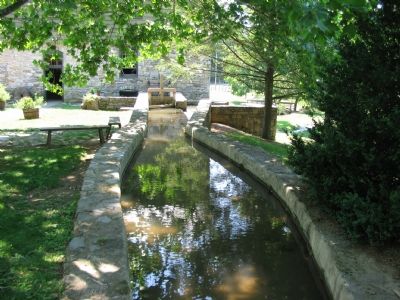 By Craig Swain, July 8, 2007
3. The Mill Race Feeds Water to the Wheel
mill at this location, used to process grains intended for sale, to include export to Europe. A second mill, originally stood nearby was solely to process grain for the Carter Hall and surrounding plantations. These two mills used the same water source.
— Submitted July 12, 2007, by Craig Swain of Leesburg, Virginia. 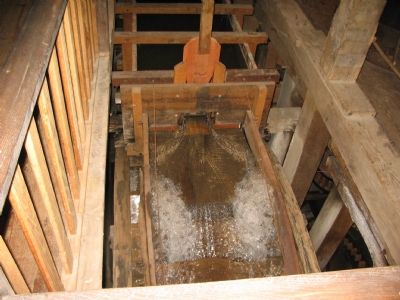 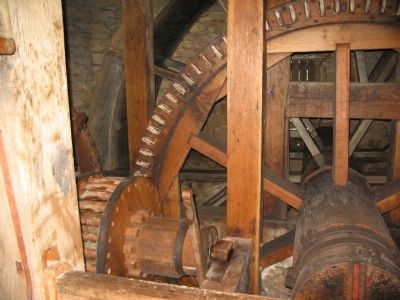 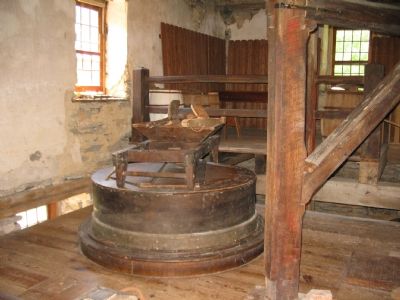 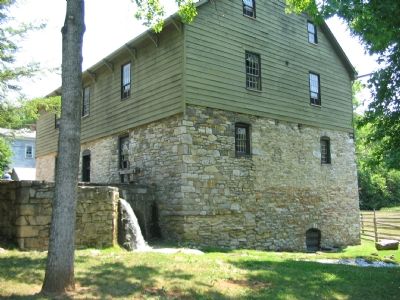