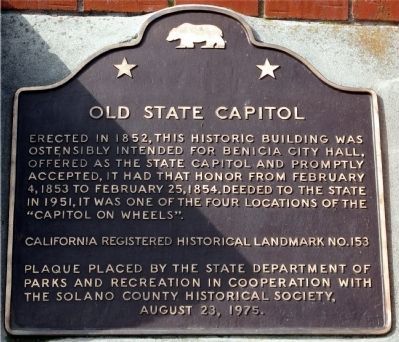 By Syd Whittle, February 20, 2009
1. Old State Capitol Marker
"State Capitals of California" website includes the Benicia period, from 4 February 1853 to 25 February 1854.
Link here:
Click for more information.
Inscription.
Old State Capitol. . , Erected in 1852, this historic building was ostensibly intended for Benicia City Hall, offered as the State Capitol and promptly accepted, it had that honor from February 4, 1853 to February 25, 1854. Deeded to state in 1951, it was one of the four locations of the “Capitol on Wheels.” . This historical marker was erected in 1975 by The State Department of Parks and Recreation in cooperation with The Solano County Historical Society, August 23, 1975.. It is in Benicia in Solano County California

Erected in 1852, this historic building was ostensibly intended for Benicia City Hall, offered as the State Capitol and promptly accepted, it had that honor from February 4, 1853 to February 25, 1854. Deeded to state in 1951, it was one of the four locations of the “Capitol on Wheels.”

Erected 1975 by The State Department of Parks and Recreation in cooperation with The Solano County Historical Society, August 23, 1975. (Marker Number 153.)

Topics and series. This historical marker is listed in these topic lists: Government & Politics • Landmarks • Notable Buildings • Notable Places. In addition, it is included in the California Historical Landmarks series list. A significant historical month for this entry is February 1812.

Location. 38° 3.008′ N, 122° 9.54′ W. Marker is in Benicia, California, in Solano County. Marker is located at the flag pole on the grounds of the Benicia Capitol State Historic Park. Touch for map. Marker is at or near this postal address: 115 West G Street, Benicia CA 94510, United States of America. Touch for directions.

Other nearby markers. At least 8 other markers are within walking distance of this marker. Founders of Benicia (here, next to this marker); Robert Semple 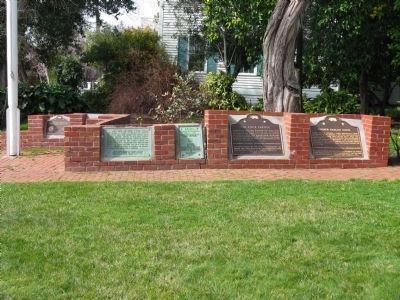 Regarding Old State Capitol. This site was designated as California Registered Historical Landmark No.153 on January 11, 1935 and was placed on the National Register of Historic Places on February 12, 1971.

Additional commentary.
1. The Benicia Capitol State Historic Park
Benicia Capitol State Historic Park is the site of California’s third seat of government (1853-54.) It is the only pre-Sacramento capitol that survives.
The original building has been restored with reconstructed period furnishings and exhibits. The interior includes a board-for-board reconstruction of the building’s original floor 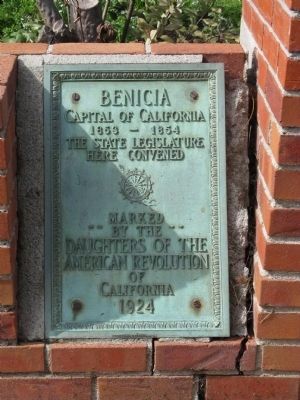 By Syd Whittle, February 20, 2009
3. A Second Marker at this Site
BENICIA
Capital of California
1853 – 1854
The State Legislature
Here Convened
Marked
--by the--
DAUGHTERS OF THE
AMERICAN REVOLUTION
OF
CALIFORNIA
1924
with ponderosa pine. The desks, three of which are originals from the Benicia period or earlier, are furnished with a candlestick, a 19th century newspaper, a quill pen and a top hat.
Source: California State Parks – www.parks.ca.gov
— Submitted February 22, 2009, by Syd Whittle of Mesa, Arizona.
2. The Restoration Process
The State Capital was originally built at a cost of $24,000. The thousands of bricks for the building were made from Benicia’s local clay. In the rush to complete the building, the bricks were not kept in the kiln long enough and they came out with their distinctive salmon color. The sandstone for the window sills and foundations was quarried in the hills just behind Benicia.

The actual building time for the capitol was only three months. Such speed was possible because the building had no modern plumbing, no heating, or lighting, and, in 1852 there were no zoning laws, red tape, or labor unions.

The two year preservation and restoration process was completed in 1958. As part of the process, a large square-hewn wooden beam was removed from over the fluted columns and replaced with reinforced concrete. The concrete was poured in position. 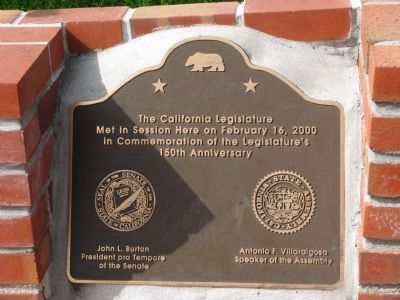 By Syd Whittle, February 20, 2009
4. A Third Marker at this Site
The California Legislature
Met in Session Here on February 16, 2000
In Commemoration of the Legislature’s
150th Annivarsary
[The Emblem of the State Senate is on the left with the inscription of:]
John L. Burton, President Pro Tempore of the Senate
[The Emblem of the State Assembly is on the right with the inscription of:]
Antonio F. Villaraigoso, Speaker of the Assembly
Greek temple design. Originally, a carved wooden eagle graced the south gable, but it disappeared in one of the buildings many renovations.

From 1854, when the capital moved to Sacramento, to 1956, when the State Division of Architecture began restoration work, the capitol building had a number of uses—theater, school, dance hall, and skating rink, to name a few. With each new use, the building underwent additions and alterations, so that by the time the restoration got under way, careful detective work was needed to determine what was genuine. Most of the alterations and repairs differed so much from the original that they had to be completely done over.

To determine authenticity of the project, the Division of Architecture relied on printed and pictorial record, reports of old-time Benicia residents, and actual evidence discovered throughout the structure and within the building frame during the work process. Further clues were provided from careful study of other buildings erected in the 1850’s at Benicia.

Restorers were able to determine which of the building’s elements were original by comparing plaster, and lumber samples, paint colors, construction techniques and even nail holes, to historic references. By such using techniques, it was even possible for them to determine when an architectural element was missing. A great deal of time was spent 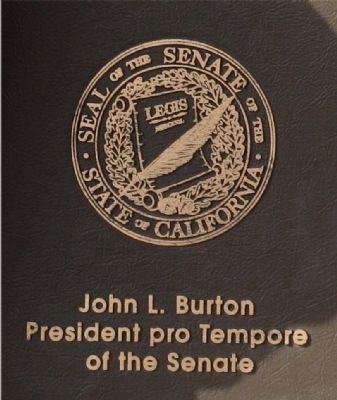 By Syd Whittle, February 20, 2009
5. The Great Seal of the Senate Engraved on Marker
investigating the interior stair area. Various features of workmanship indicated that the stairs in the building when restoration began were not original. No photos or documentation of the original stairs existed. Restorers investigated nail holes and marks in the original floor and walls in order to determine the probable configuration of the original stairs.
— Submitted February 22, 2009, by Syd Whittle of Mesa, Arizona.
3. From Boat to Building
The Alta California for December 1852 reported, ”A large fine brick edifice has been erected here, intended for a City Hall, but it is rumored that strong efforts will be made to induce the Legislature to hold meetings within its walls. Indeed, the offer of the substantial city hall was probably the strongest inducement to move the capital to Benicia. It would lend the roving capital a badly-needed air of dignity.

Built during the material and manpower shortages of the Gold Rush years, the State Capitol is a monument to the resourcefulness of California’s pioneers. Building materials liberated from abandoned ships saw a second life as decorative and structural elements. The six New England Cedar Columns in the Senate Chamber were originally ship masts. The “Terme-plate” roof (iron plates coated 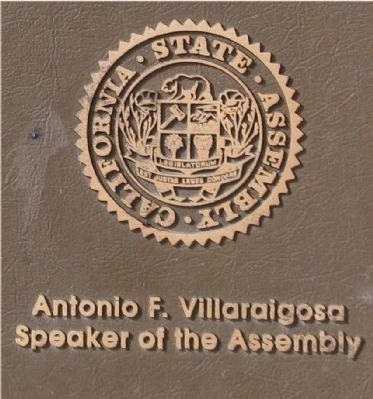 By Syd Whittle, February 19, 2009
6. California State Assembly Engraved on Marker
with lead and tin) was manufactured in Wales, and may have been salvaged from one of the hundreds of ships abandoned on San Francisco Bay.
— Submitted February 22, 2009, by Syd Whittle of Mesa, Arizona. 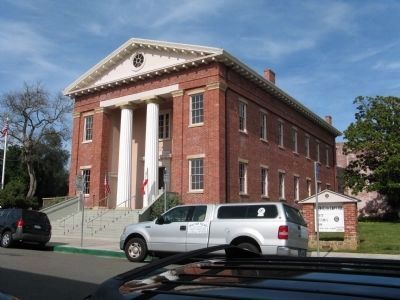 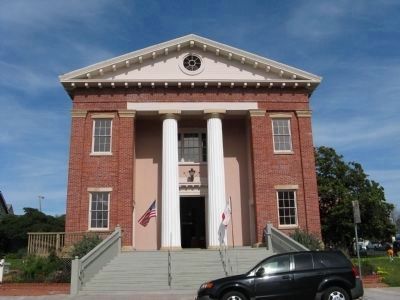 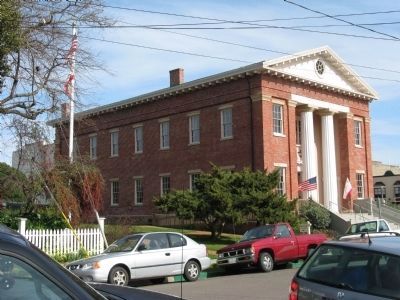 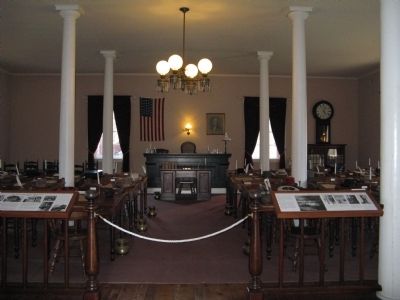 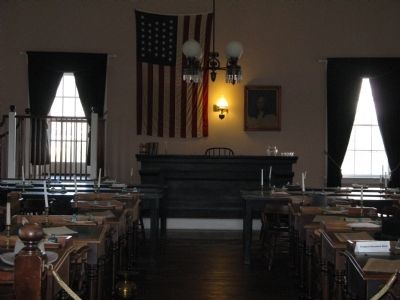 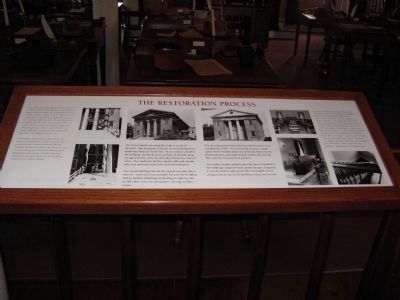 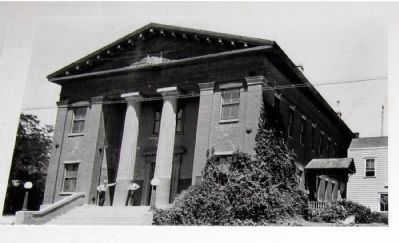 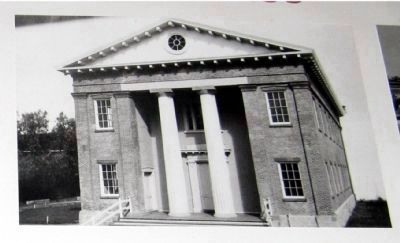 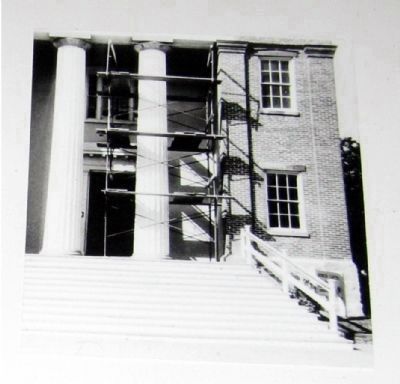 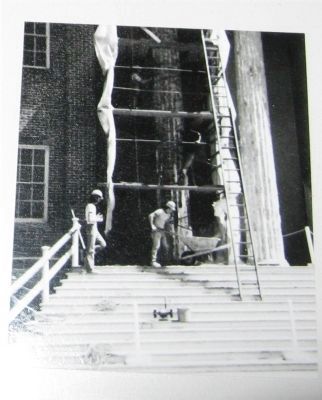 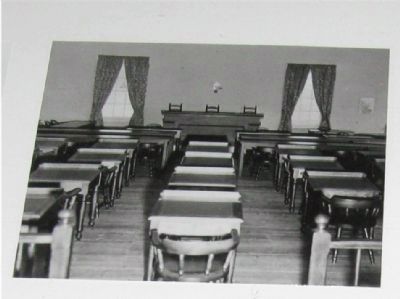 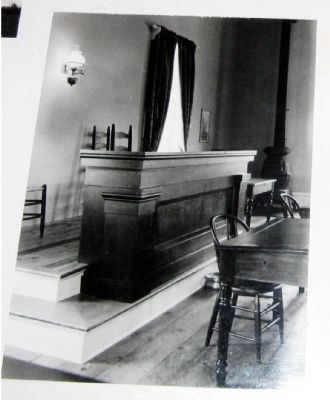 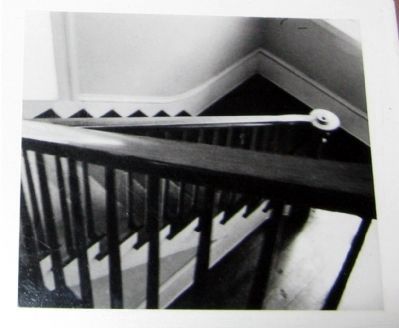 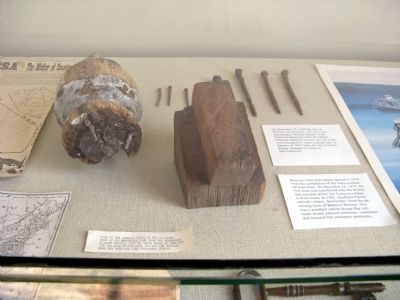 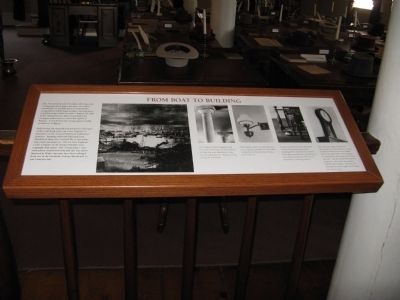 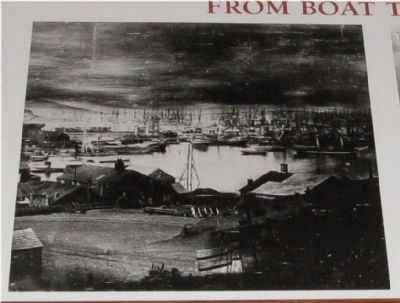 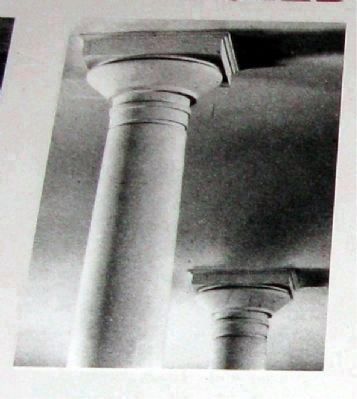 Benicia Capitol State Historic Park, circa 1956
23. The Columns in the Senate Chamber
The columns of New England Cedar were taken off of some of the hundreds of ships that were abandoned in San Francisco Bay and the Carquinez Straits during the Gold Rush.
See Comment #3 and Photo #21 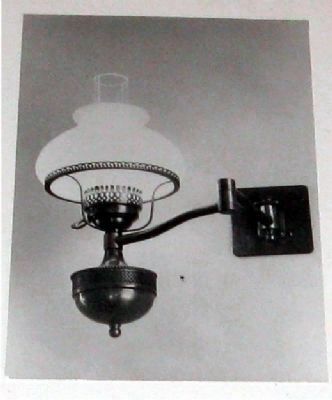 Benicia Capitol State Historic Park, circa 1956
24. The Lamps
These lamps (which are reproductions) were originally salvaged from the cabins of abandoned ships and were fitted to burn whale oil.
See Comment #3 and Photo #21 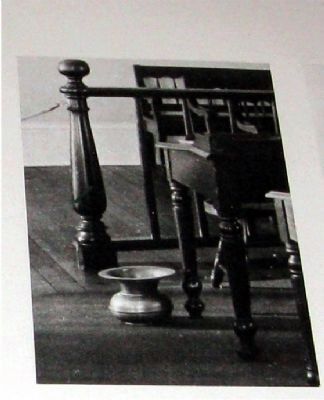 Benicia Capitol State Historic Park, 1956
25. The Spittoons
So great was the fear of fire, that there was no smoking permitted in the building when it was the State Capital. These spittoons (they are reproductions) were necessary because there was no restrictions on chewing tobacco.
See Comment #3 and Photo #21 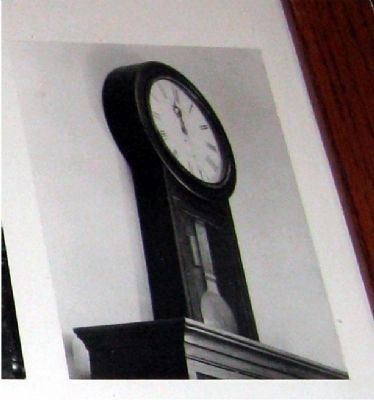 Benicia Capitol State Historic Park, circa 1956
26. The Clock
This clock was made in France for Sperry and Co. in San Francisco. It was brought around the horn on a clipper ship in the early 1850's. The pendulum is suspended by alternating rods of brass and steel. The two metals have opposite properties - when cold, one contracts and the other expands. This keeps the pendulum the same length, which keeps the clock accurate.
See Photo #21 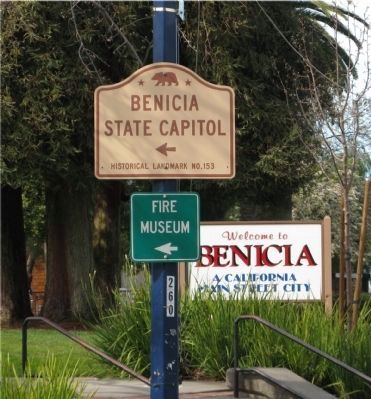