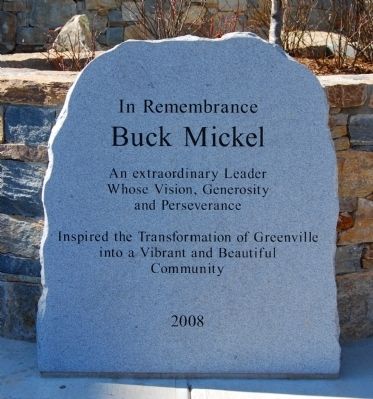 Photographed By Brian Scott, February 15, 2009
1. Buck Mickel Marker
Inscription.
Buck Mickel. .
In Remembrance Buck Mickel An extraordinary Leader Whose Vision, Generosity and Perseverance , Inspired the Transformation of Greenville into a Vibrant and Beautiful Community. . This historical marker was erected in 2008. It is in Greenville in Greenville County South Carolina

In Remembrance
Buck Mickel
An extraordinary Leader
Whose Vision, Generosity
and Perseverance

Inspired the Transformation of Greenville
into a Vibrant and Beautiful
Community 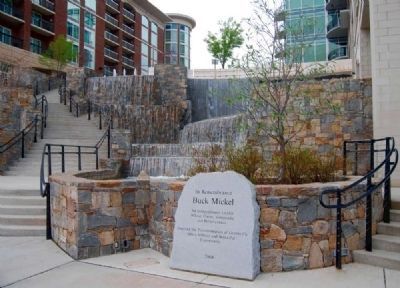 Additional commentary.
1. Moore School of Business, University of South Carolina 2008 Distinguished Alumni & Service Award
The late Buck Mickel (1925-1998) was Chairman of Daniel International Corporation and Vice Chairman and President of Fluor Corporation. Respected as a giant in the Greenville, South Carolina, community and the world of commerce, he is remembered as a thoughtful and generous person, an outstanding leader, and a willing mentor to those who sought his counsel.

Inducted into the South Carolina Business Hall of Fame in 1986, Mr. Mickel played a major role in Greenville's development for 40 years, prodding for the construction of the Hyatt Regency Hotel, the Bi-Lo Center, and the South Carolina Governor's School for the Arts in downtown Greenville. In addition to his numerous civic projects, Mr. Mickel was a champion of education at all levels.

An engineer and builder, Buck 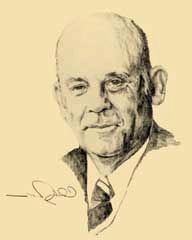 Photographed By Brian Scott
3. Buck Mickel
(1925–1998)
Mickel began his career with Daniel Construction Company (later renamed Daniel International Corporation) in 1948. He was named vice president in 1960, president and general manager in 1965, and chairman in 1972, providing the guidance that led to Daniel's phenomenal growth in both domestic and foreign markets.

In 1977, Fluor Corporation acquired Daniel, and Mr. Mickel was named to an expanded Fluor board of directors. Later, he was named a Fluor group vice president. In 1987, he retired from executive positions at both Fluor and Daniel. He retired from the Fluor Board of Directors in January 1998.
Through the years, Mr. Mickel served as a director of nearly 40 businesses, including Duke Power Company, The Liberty Corporation, Monsanto Company, J.P. Stevens & Company, Delta Woodside Industries, Insignia Financial Group, NationsBank, Cox Cable Communications, CSX Corporation, Graniteville Company, Seaboard Coast Line Railroad, Dunlop Tire & Rubber Company, and National Intergroup. He was also the founder of several South Carolina businesses, among them U.S. Shelter Corporation and RSI Holdings, Inc.

The South Carolina Chamber of Commerce named him its Businessman of the Year in 1983, and Governors James B. Edwards and David M. Beasley awarded him the Order of the Palmetto, the highest civilian honor given by the state of South Carolina.