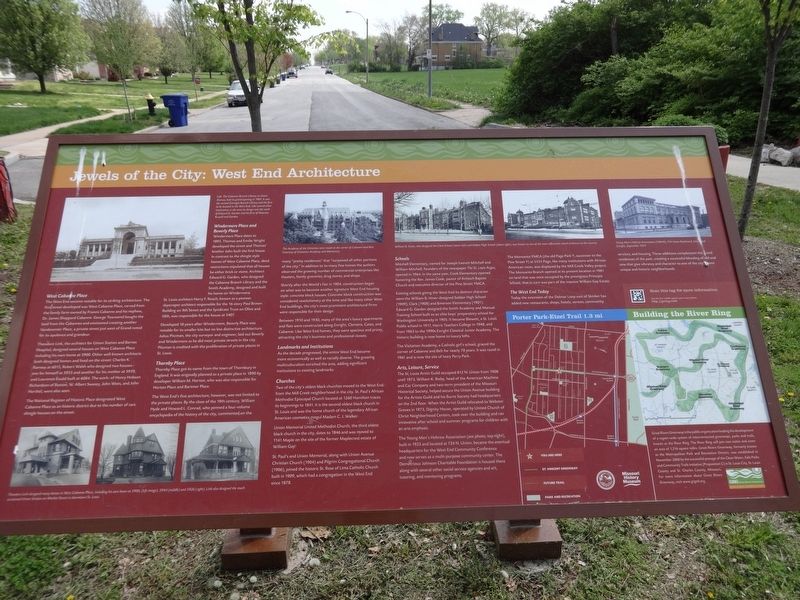 The West End became notable for its striking architecture. The first street developed was West Cabanne Place, carved from the family farm owned by Francis Cabanne and his nephew, Dr. James Sheppard Cabanne. George Townsend bought the land from the Cabannes and envisioned creating another Vandeventer Place, a private street just west of Grand noted for its opulence and grandeur.

Theodore Link, the architect for Union Station and Barnes Hospital, designed several houses on West Cabanne Place including his own home at 5900. Other-well-known architects both designed homes and lived on the street: Charles K. Ramsey at 6015, Robert Walsh who designed two houses - one for himself at 5955 and another for his mother at 5959, and Lawrence Ewald built at 6084. The works of Henry Hobson Richardson of Boston, W. Albert Swasey, John Wees, and John Herthel, were also seen.

The National Register of Historic Place designed West Cabanne Place as an historic district due to the number of rare shingle houses on the street.

Windermere Place dates to 1895. Thomas and Emilie Wright developed the street and Thomas' brother John built the first house. In contrast to the shingle style homes of West Cabanne Place, deed restrictions stipulated that all houses be either brick or stone. Architect Edward G. Garden, who designed the Cabanne Branch Library and the Smith Academy, designed and built his home on Windermere. St. Louis architect Harry F. Roach, known as a pioneer skyscraper architect responsible for the 16-story Paul Brown Building on 9th Street and the Syndicate Trust on Olive and 10th, was responsible for the house at 5407.

Developed 10 years after Windermere, Beverly Place was notable for its smaller lots but no less distinctive architecture. Julius Pitzman, the city surveyor and engineer, laid out Beverly and Windermere as he did most private streets in the city. Pitzman is credited with the proliferation of private places in St. Louis.

Thornby Place got its name from the town of Thornbury in England. It was originally planned as a private place in 1890 by developer William M. Horton, who was also responsible for Horton Place and Bartmer Place.

The West End's fine architecture, however, was not limited to the private places. By the close of the 19th century, William Hyde and Howard L. Conrad, who penned a four-volume encyclopedia of the history of the city, commented on the many "pretty residences" that "surpassed all other portions of the city." In addition to its many fine homes the authors observed the growing number of commercial enterprises like theaters, family groceries, drug stores, and shops.

Shortly after the World's Fair in 1904, construction began on what was to become another signature West End housing style: concrete block houses. Concrete block construction was considered revolutionary at the time and like many other West End buildings, the city's most prominent architectural firms were responsible for their design.

Between 1910 and 1930, many of the area's luxury apartments and flats were constructed along Enright, Clemens, Cates, and Cabanne. Like West End homes, they were spacious and pricey, attracting the city's business and professional classes.

Two of the city's oldest black churches moved to the West End from the Mill Creek neighborhood in the city. St. Paul's African Methodist Episcopal Church located at 1260 Hamilton traces its beginnings to 1841. It is the second oldest black church in St. Louis and was the home church of the legendary African American cosmetics mogul Madam C.J. Walker.

Union Memorial United Methodist Church, the third oldest black church in the city, dates to 1846 and was moved to 1141 Maple on the site of the former Maplecrest estate of William Gay.

St. Paul's and Union Memorial, along with Union Avenue Christian Church (1904) and Pilgrim Congregational Church (1906), joined the historic St. Rose of Lima Catholic Church built in 1909, which had a congregation in the West End since 1878.

Existing schools giving the West End its distinct character were the William B. Ittner-designed Soldan High School (1909), Clark (1908) and Emerson Elementary (1901). Edward G. Garden designed the Smith Academy and Manual Training School built as an elite boys' preparatory school for Washington University in 1905. It became Blewett, a St. Louis Public school in 1917, Harris Teachers College in 1948, and from 1963 to the 1990s Enright Classical Junior Academy. The historic building is now home to luxury lofts.

The Visitation Academy, a Catholic girl's school, graced the corner of Cabanne and Belt for nearly 70 years. It was razed in 1961 and is now the site of Ivory Perry Park.

The St. Louis Artist Guild occupied 812 N. Union from 1908 until 1973. William K. Bixby, head of the American Machine and Car Company and two-term president of the Missouri Historical Society, helped secure the Union Avenue building for the Artists Guild and his Burns Society had headquarters on the 2nd floor. When the Artist Guild relocated to Webster Groves in 1973, Dignity House, operated by United Church of Christ Neighborhood Centers, took over the building and ran innovative after school and summer programs for children with an arts emphasis.

The Young Men's Hebrew Association (see photo, top right), built in 1925 and located at 724 N. Union, became the eventual headquarters for the West End Community Conference and now serves as a multi-purpose community center. The Demetrious Johnson Charitable Foundation is housed there along with several other social service agencies and art, tutoring, and mentoring programs.

The Monsanto YMCA (the old Page Park Y, successor to the Pine Street Y) at 5555 Page, like many institutions with African American roots, was displaced by the Mill Creek Valley project. The Monsanto Branch opened at its present location in 1981 on land that was once occupied by the prestigious Principia School, that in turn was part of the massive William Gay Estate.

Today the extension of the Delmar Loop east of Skinker has added new restaurants, shops, hotels, venues, community services, and housing. These additions complement the grand residences of the past, creating a successful blending of old and new that give vibrancy and character to one of the city's most unique and historic neighborhoods.

·The Cabanne Branch Library on Union Avenue, had its grand opening in 1907. It was the second Carnegie Branch Library and the first to be located in the West End. Like several other institutions in the area its design was the work of Edward G. Garden and his firm of Mauran, Russell and Garden.

·The Academy of the Visitation once stood at the corner of Cabanne and Belt.

·William B. Ittner, who designed the Clark School and Soldan High School, was known as one of the most influential school architects in the country.

·Theodore Link designed many homes in West Cabanne Place, including his own home at 5900, 5944 and 5926. Link also designed the much acclaimed Union Station on Market Street in downtown St. Louis.

Location. 38° 39.518′ N, 90° 17.014′ W. Marker is in West End in St. Louis, Missouri. Marker is on Cabanne Avenue west of Clara Avenue, in the median. Marker is actually located off the St. Vincent Greenway trail, which splits Cabanne Avenue. Touch for map. Marker is at or near this postal address: 3825 Cabanne Avenue, Saint Louis MO 63112, United States of America. Touch for directions.

Editor’s want-list for this marker. a wide-view area of the marker and its surroundings • Can you help?
Share This Page.