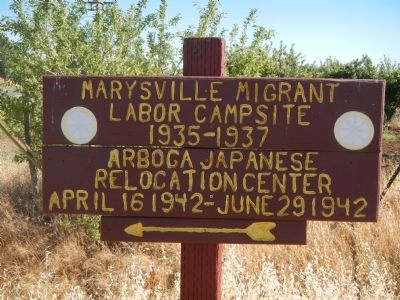 Topics and series. This historical marker is listed in these topic lists: Agriculture • Asian Americans • War, World II. In addition, it is included in the California Historical Landmarks series list. 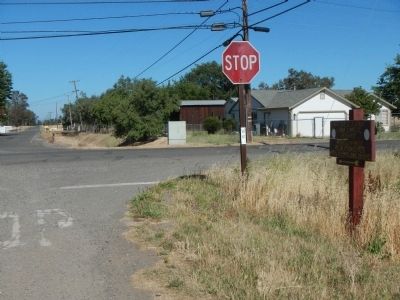 Regarding Marysville Migrant Labor Campsite. A marker for the Arboga Japanese Relocation Center, California Historical Landmark No. 934, was installed in 2021 at the new Arboga Assembly Center Memorial Site and Interpretive Center, ¼ mile east of here.

Also see . . .  Plaque marks WWII internment - Appeal - Democrat. An expanse of land at Broadway Road and Feather River Boulevard in Olivehurst was what the Penryn resident called home for two months in 1942. After the bombing of Pearl Harbor, his family was assigned to the Arboga Assembly Center before being herded to Tulelake Internment Camp in Modoc County. (Submitted on June 14, 2013, by Barry Swackhamer of Brentwood, California.)
Credits. This page was last revised on January 26, 2021. It was originally submitted on June 14, 2013. This page has been viewed 499 times since then and 14 times this year. Last updated on January 24, 2021. Photos:   1, 2. submitted on June 14, 2013, by Barry Swackhamer of Brentwood, California. • J. Makali Bruton was the editor who published this page.
Share This Page.