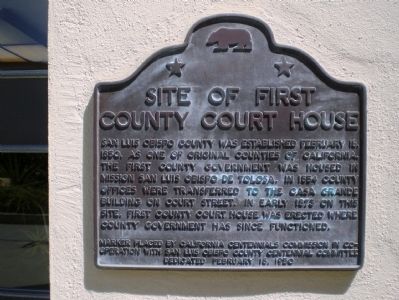 San Luis Obispo was established February 18, 1850, as one of the original counties of California. The first county government was housed in Mission San Luis Obispo de Tolosa. In 1854 county offices were transferred to the Casa Grande Building on Court Street. In early 1873 on this site first county court house was erected where county government has since functioned.

Topics. This historical marker is listed in these topic lists: Government & Politics • Notable Buildings. A significant historical date for this entry is February 18, 1850. 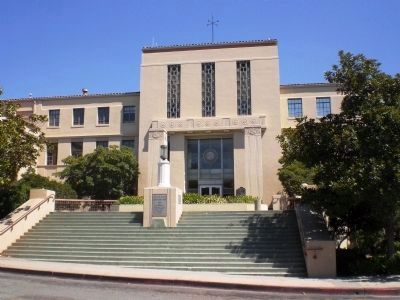 Photographed By Andrew Ruppenstein, September 6, 2008
2. (Second) San Luis Obispo County Court House (Constructed 1940)
The historical marker is located just to the right of the Osos Street entrance. Of the two plaques visible on the lighting plinth on the steps, one notes that A.R. Walker and P.A. Eisen were the architects and Charles D. Eggleston was the construction superintendent, while the other (larger) notes the county supervisors in 1940 were Claude Arnold, Henry Twisselman, Alfred Ferrini, John Norton, and A.A. Erhart.

More about this marker. Although the marker looks like those used by the State of California to designate California State Historical Landmarks, this site is in fact not such a landmark.

Regarding Site of First County Court House. The courthouse (subject of the marker) was completed in 1873, a handsome 3-story Greek Revival style building. It was demolished in 1940 and succeeded by the building pictured to the left and below, although that too has now been succeeded by a newer 1960's era building. 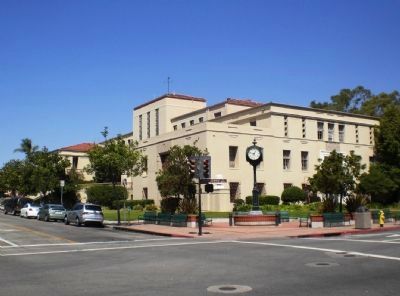