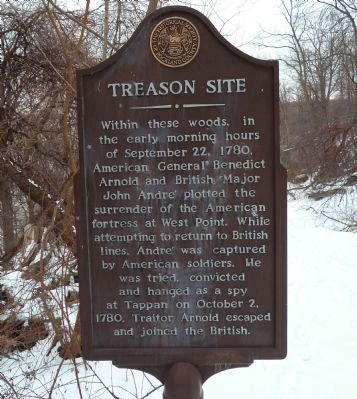 Photographed By John Intile, February 24, 2011
1. Treason Site Marker
Closeup of the marker facing South.
Inscription.
Treason Site. . Within these woods, in the early morning hours of September 22, 1780, American General Benedict Arnold and British Major John André plotted the surrender of the American fortress at West Point. While attempting to return to British lines, André was captured by American soldiers. He was tried, convicted and hanged as a spy at Tappan on October 2, 1780. Arnold escaped capture and joined the British. . This historical marker was erected by The Historical Society Of Rockland County. It is in Haverstraw in Rockland County New York

Within these woods, in the early morning hours of September 22, 1780, American General Benedict Arnold and British Major John André plotted the surrender of the American fortress at West Point. While attempting to return to British lines, André was captured by American soldiers. He was tried, convicted and hanged as a spy at Tappan on October 2, 1780. Arnold escaped capture and joined the British.

Erected by The Historical Society Of Rockland County.

Topics and series. This historical marker is listed in this topic list: War, US Revolutionary. In addition, it is included in the New York, Historical Society of Rockland County series list. A significant historical date for this entry is September 22, 1780.

Other nearby markers. At least 8 other markers are within 2 miles of this marker, measured as the crow flies. Andre The Spy (within shouting distance of this marker); Snedekers Landing (approx. ¼ mile away); King's Highway and the Long Clove 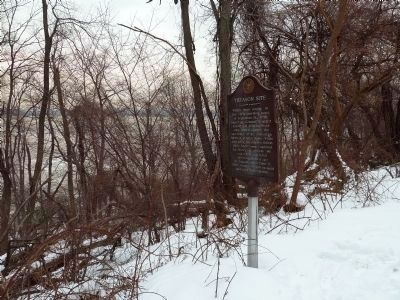 Photographed By John Intile, February 24, 2011
2. Treason Site Marker
Photo of the marker along the wooded trail taken at a slight angle in order to visualize the proximity of the Hudson River which is down a very steep embankment to the left.

More about this marker. The marker is approximately a quarter mile South of the entrance to a secluded footpath in the wooded heights above the West bank of the Hudson River. Park your vehicle at the entrance to the trail. The marker is on the left side of the trail as you travel south on foot. It is not accessible by motor vehicle. The area is secluded and traveling with a companion is advisable.

Regarding Treason Site. This marker designates the area where American General Benedict Arnold met secretly with British Major John Andre in the pre-dawn darkness on September 22, 1780 in order to finalize plans for Arnold's betrayal of West Point to the British. After an initial failed attempt, Andre finally succeeded in reaching Arnold by being conveyed up the Hudson River on the British sloop of war Vulture which was anchored in Haverstraw Bay off Teller's Point.

Arnold had convinced local attorney Joshua Hett Smith and two local farmers to assist in the affair, perhaps unwittingly, by having Smith and the farmers secure a rowboat for the purpose of retrieving Andre from the Vulture and conveying him ashore for the meeting with Arnold. Due to the approaching daylight, unfavorable tides and unwillingness 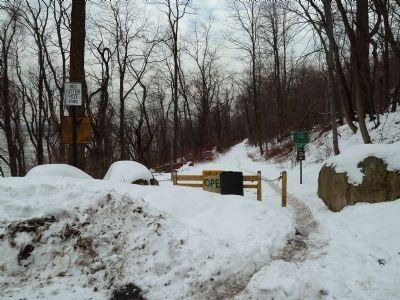 Photographed By John Intile, February 24, 2011
3. Treason Site Marker
View of the entrance to the trail, facing South.
of the increasingly suspicious boat hands to entangle themselves in what they may have sensed was a nefarious affair, Andre was unable to return to the Vulture that night and was forced to spend the next day in hiding at Smith's home (the Treason House) in Haverstraw, where he and Arnold continued to plot West Point's downfall. Andre's plan to return to the Vulture the following night was frustrated when an American artillery officer, Colonel James Livingston, stationed on Teller's Point just Northeast of where the Vulture lay at anchor, made a decision to fire upon the Vulture thus forcing the ship to retreat southward out of range and out of Andre's reach thus forcing Andre to attempt an escape via a land route back to the safety of British-controlled territory to the south. It was during this attempted escape from the American lines that Andre, now in disguise and accompanied initially by Smith, was forced to pass through several checkpoints.

Eventually, Smith departed, fearing to enter the "no-man's-land" that existed between the American and British lines, leaving Andre to make the rest of the trek alone. Just as he was about to cross over to the safety of British-controlled territory, Andre was captured and taken into custody by an American militia patrol consisting of John Paulding, Isaac Van Wart and David Williams who, upon interrogating him, became suspicious 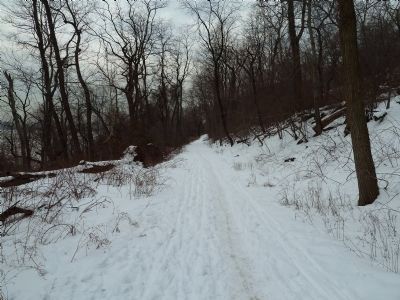 Photographed By John Intile, February 24, 2011
4. Treason Site Marker
View of the wooded trail looking South.
of Andre's story and, discovering incriminating documents from Arnold that Andre had hidden in his boot, suspected Andre of espionage thus likely preventing the loss of West Point.

Related marker. Click here for another marker that is related to this marker. The Treason House Marker. 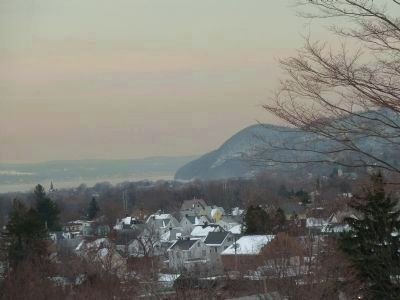 Photographed By John Intile, February 17, 2011
5. Treason Site Marker
This photograph shows Haverstaw Bay as it would have been seen from the second story window of Smith's house (the Treason House). It was from that window that Andre and Arnold watched with horror as American artillery officer, Colonel James Livingston stationed on Teller's Point, unexpectedly and, acting on his own good judgment, began firing on the Vulture thus forcing the ship to weigh anchor and sail South and out of range of the bombardment, and out of reach of Andre. This brave decision by an American officer to take resolute action when it was required represents another fateful decision in the Arnold-Andre conspiracy that had world-changing and irreversible consequences. 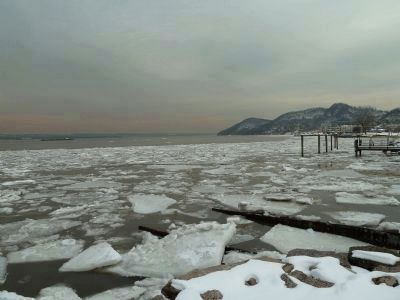 Photographed By John Intile, February 24, 2011
6. Haverstraw Bay
This photograph shows the Haverstraw Bay section of the Hudson River. The Vulture would have been anchored in the distance off Teller's point to the East (left). Andre, accompanied by Joshua Hett Smith and the reluctant boat hands, was rowed ashore from the Vulture in the darkness and landed along the West bank of the river to the right in the photograph and then clambered up the steep embankment where Benedict Arnold awaited him. After talking for an hour or more, they were warned by Smith of the approaching dawn. It was this fateful decision by Andre to accompany Arnold back to the Smith (Treason) house in Haverstraw that would ultimately prevent him from returning to the Vulture and sealed his doom on the gallows.
Credits. This page was last revised on January 29, 2021. It was originally submitted on February 25, 2011, by John Intile of Toms River, New Jersey. This page has been viewed 6,155 times since then and 221 times this year. Last updated on January 28, 2021, by Carl Gordon Moore Jr. of North East, Maryland. Photos:   1, 2, 3, 4. submitted on February 25, 2011, by John Intile of Toms River, New Jersey.   5, 6. submitted on February 26, 2011, by John Intile of Toms River, New Jersey. • Bill Pfingsten was the editor who published this page.
Share this page.