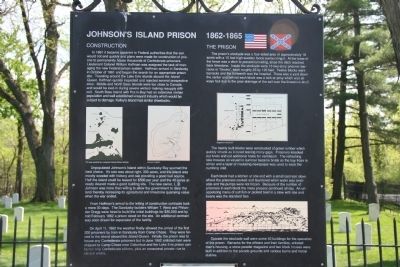 In 1861 it became apparent to Federal authorities that the war would not end quickly and plans were made for construction of prisons to permanently house thousands of Confederate prisoners. Lieutenant Colonel William Hoffman was assigned the task of managing the new Federal prison system. Hoffman arrived in Sandusky in October of 1861 and began the search for an appropriate prison site. Traveling around the Lake Erie islands aboard the Island Queen, Hoffman quickly inspected and rejected several prospective sites. Middle and North Bass Islands were too close to Canada and would be iced-in during severe winters making resupply difficult. South Bass Island with Put-In-Bay had an extensive civilian population and well established vineyard industry which would be subject to damage. Kelley's Island had similar drawbacks.

Unpopulated Johnson's Island within Sandusky Bay seemed the best choice. It's size was about right, 300 acres, and the island was mostly wooded with hickory and oak providing a good fuel source. Half the island could be leased for $500 per year and the 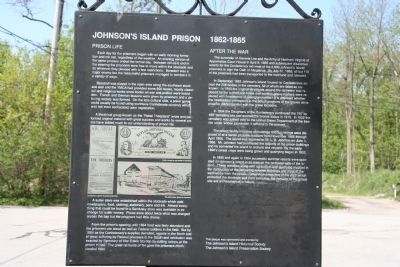 By Dale K. Benington, May 10, 2009
2. Johnson's Island Prison Marker
The reverse side of the Johnson Island Prison marker.
40 acres already cleared made a good building site. The new owner, L.B. Johnson was more than willing to allow the government to clear the land thereby increasing its agricultural and limestone quarrying value when the war ended.

From Hoffman''s arrival to the letting of construction contracts took a mere 30 days. The Sandusky builders William T. West and Philander Gregg were hired to build the initial buildings for $30,000 and by mid February 1862 a prison stood on the site. An additional contract was soon drawn for expansion of the facility.

On April 11, 1862 the weather finally allowed the arrival of the first 200 prisoners by train in Sandusky from Camp Chase. They were ferried to the island on board the Island Queen. Initially the prison was to house any Confederate prisoners but in June 1862 enlisted men were shipped to Camp Chase near Columbus and the Lake Erie prison contained only Confederate officers, plus an occasional private due to clerical errors.

The prison's stockade was a four-sided area of approximately 16 acres with a 15 foot high wooden fence surrounding it. At the base of the fence was a ditch to prevent tunneling, since the ditch reached bare limestone. Inside the stockade were 13 two-story prisoner barracks or "blocks," each roughly 25 by 125 feet. Twelve blocks were barracks and the thirteenth 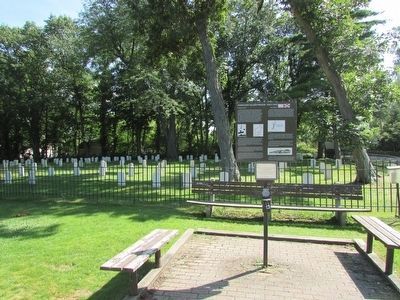 By Bill Coughlin, August 5, 2015
3. Johnson's Island Prison Marker
was the hospital. There was a yard down the center and behind each block was a sink or a privy which was always foul due to the poor drainage of the soil over the limestone shelf.

The hastily built blocks were constructed of green lumber which quickly shrank as it cured leaving many gaps. Prisoners knocked out knots and cut additional holes for ventilation. The refreshing lake breezes so valued in summer became brutal as the bay froze in winter and a layer of insulating newspaper was used to ease the numbing cold.

Each block had a kitchen at one end with a cast iron stove where the prisoners cooked and laundered when water was available and the pumps were not frozen. Because of the number prisoners in each block the mess process continued all day. An unappetizing menu of salt fish or pickled beef in a stew with rice and beans was the standard fare.

Outside the stockade wall were some 40 buildings for the operation of the prison. Barracks for the officers and their families, enlisted men's housing, a stone powder magazine and two block houses were built in addition to the parade grounds and various barns and horse stables.

Each day for the prisoners began with an early morning formation and roll call, regardless of the weather. An evening version of the same process ended the formal 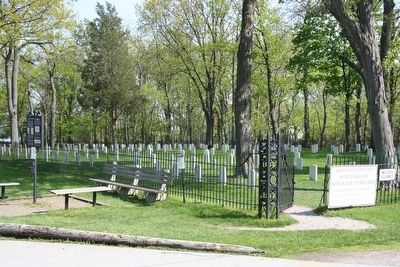 By Dale K. Benington, May 10, 2009
4. Johnson's Island Prison Marker & Cemetery
View of historical marker in left foreground and Confederate Cemetery in the background.
day. Between roll calls and in the evening the prisoners were free to move within the stockade and do whatever they pleased with a few restrictions. Boredom was a major enemy but the resourceful prisoners managed to combat it in a variety of ways.

Baseball was played in the open area along the southeast stockade wall and the YMCA had provided some 600 books, mostly classical and religious works since since books on war and politics were forbidden. French and German lessons were given by prisoners and a debating society was formed. On the less cultural side, a poker game could usually be found using worthless Confederate currency which was not even confiscated upon registration.

A theatrical group known as the "Rebel Thespians" wrote and performed original material with great success and works by several artists have added much to our understanding of prison life.

A sutler store was established within the stockade which sold newspapers, food, clothing, stationery, pens and ink. Almost everything that could be found in a Sandusky store was available in exchange for sutler money. Prices were about twice what was charged across the bay but the prisoners had little choice.

From the prison''s opening until 1864 food was fairly abundant and the prisoners ate about as well as Federal soldiers in the field. But by 1864 as the Confederacy's supplies 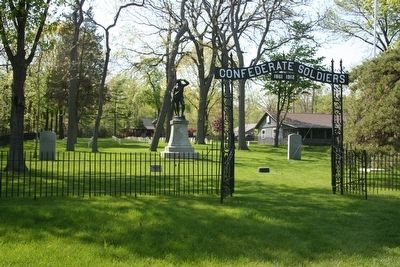 By Dale K. Benington, May 10, 2009
5. Johnson's Island Confederate Cemetery
dwindled, reports in the North told of great suffering by Federal prisoners in the South and retribution was exacted by Secretary of War Edwin Stanton by cutting rations at the prison in half. The great rat hunts of '64 gave the prisoners much needed food.

The surrender of General Lee and the Army of Northern Virginia at Appomattox Court House in April 9, 1865 and subsequent disastrous events for the Confederacy led most of the 2,800 Johnson's Island prisoners to sign an Oath of Allegiance. By July 31. 1865, all but 110 of the prisoners had been transported to the mainland and released.

In September 1865 Johnson''s Island housed no Confederates except the 206 bodies in the cemetery, 52 of whom are listed as unknown. In 1890 the original wire fence around the cemetery was replaced by the current iron fence and wooden grave markers were replaced with headstones of Georgian marble. It is unknown whether the headstones correspond to the actual positions of the graves since prisoner diaries conflict with the grave locations.

In 1904 the Daughters of the Confederacy purchased the 100' by 485' cemetery site and erected the bronze statue in 1910. In 1932 the cemetery was turned over to the United States Department of the Interior under whose jurisdiction it remains to the present.

The prison facility including all buildings and furnishings were disposed of at a series of public auctions from November 1865 through April 1866. The island was returned to Mr. L.B. Johnson on June 8, 1866. Mr. Johnson had purchased the majority of the prison buildings and he converted the island to orchard and vinyard. By the early 1890's cereal crops were being grown and quarrying began in 1902.

In 1895 and again in 1904 successful summer resorts were operated on Johnson's Island in an area on the northeast side of the island. These activities along with agriculture and quarrying resulted in the destruction of the remaining wooden buildings and most of the earthworks from the prison. Other than a few feet of the ditch which protected the stockade wall from tunneling, the remains of the prison site are archaeological in nature.

Topics and series. This historical marker is listed in these topic lists: Forts and Castles • War, US Civil. In addition, it is included in the National Historic Landmarks, and the United Daughters of the Confederacy series lists.

More about this marker. This historical marker is located on Johnson's Island, which is situated in Sandusky Bay, just off shore and to the south of the Marblehead Pennisula.

Also see . . .
1. Johnson's Island Preservation Society Site. Provides details of the site and state of preservation. (Submitted on May 18, 2009, by Craig Swain of Leesburg, Virginia.)

2. Johnson's Island Archaeology. Site discussing the archeological research done on the island. (Submitted on May 18, 2009, by Craig Swain of Leesburg, Virginia.)