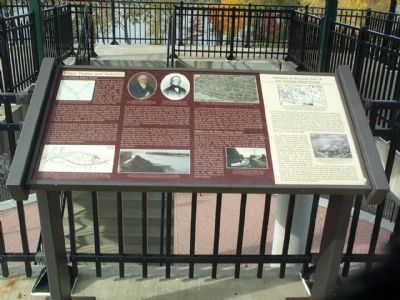 The Trenton Water Power
The Trenton Water Power was a seven-mile canal built in the early 1830s along the left bank of the Delaware River to spur industrial development along the waterfront in Trenton. The canal drew water from the Delaware via a wing dam at Scudders Falls, passed through downtown Trenton, and emptied back into the river below the falls at present-day Waterfront Park.
In 1831 the Trenton Delaware Falls Company incorporated and was authorized by the New Jersey Legislature to construct a dam in the Delaware River and a raceway into Trenton. The company sold stock, bought land and hired engineers Benjamin Wright, Stephen Long and Charles Potts to design the project. Completed in 1834 at a cost of roughly $150,000, the canal included a main raceway, 60 feet wide and six feet deep, and a stone and timber aqueduct spanning the Assunpink Creek. At its downstream terminus in Lamberton, the canal could generate a fall of 18 feet.
The Trenton Delaware Falls Company projected that at least 19 mills would soon be in operation along the banks of the new canal. By 1837, however, only 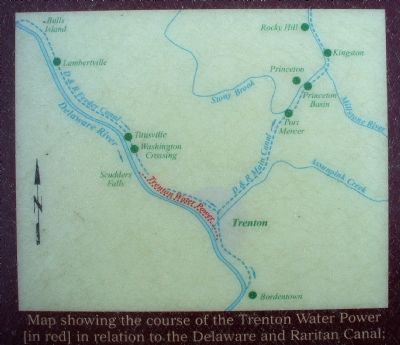 By Gary Nigh, December 2007
2. Map showing the course of the Trenton Water Power
[in red] in relation to the Delaware and Raritan Canal; both waterways were built in the early 1830s
seven mills above the Assunpink were running, while downstream from the aqueduct one pre-existing mill awaited hook-up and three others were still being built. Although other mills did start up, the shaky economy of the late 1830s and severe flooding in 1841 brought industrial activity along the canal almost to a standstill. In 1843, the Trenton Delaware Falls Company went into receivership, its assets seized against debts still owing on the original land acquisition and construction.
In 1844-45, as the Trenton Delaware Falls Company was dissolved, New York industrialist Peter Cooper created the Trenton Water Power Company to acquire the earlier corporation’s assets. With his son, Edward, and son-in-law, Abram S. Hewitt, Cooper concurrently founded the Trenton Iron Company, passing control of the Water Power to this new manufacturing venture. Together the Trenton Iron Company and the Trenton Water Power became key components in the emerging Cooper & Hewitt iron and steel making empire. The Trenton Iron Company also assumed responsibility for the canal’s upkeep and for supplying water to other mills along its course. Through the Civil War era, the Water Power helped fuel the growth of the Trenton Iron Company, but the canal was frequently a frustration to its new owners. The ironworks sought to expand the waterway, but was opposed by other river users and Pennsylvania interests 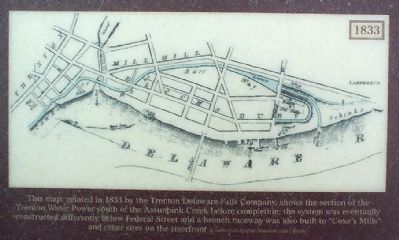 By Gary Nigh, December 2007
3. This map printed in 1833 by the Trenton Delaware Falls Company,
shows the section of the Trenton Water Power south of the Assunpink Creek before completion; the system was eventually constructed differently below Federal Street and a branch raceway was also built to “Coxe’s Mills” and other sites on the riverfront
[Hagley Museum and Library]
that did not want a larger dam across the Delaware. In 1852, this culminated in the “Stone-hackers War,” when ironworkers clashed on the wing dam with fishermen and laborers mining the riverbed for stone. Another drawback for the canal’s owners was the expensive repair work caused by the frequent flooding on the Delaware.
As coal-fired steam replaced hydropower, the ironworks lost interest in the canal and by 1890 had ceased using water power altogether. The canal had to be maintained, however, since the city used the Water Power at its Calhoun Street water pumping station, and a dozen other mills were still drawing energy into the 1890s. In the second decade of the 20th century a segment of the canal was incorporated into Mahlon Stacy Park and renamed “Sanhican Creek.” During the 1930s the Water Power was re-routed to empty into the Delaware River at the water filtration plant and ceased to exist from this point downstream. The Water Power finally disappeared from view in the 1950s when Route 29 was placed along the portion of its alignment from Scudders Falls to Calhoun Street.

Where is the Water Power Now?
Not much survives of the Trenton Water Power today. The canal has been filled in and built over, and in many places obliterated. The mills along its course have long since been demolished. Route 29 lies 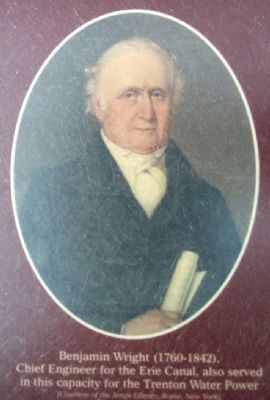 By Gary Nigh, December 2007
4. Benjamin Wright (1760-1842),
Chief Engineer for the Erie Canal, also served in this capacity for the Trenton Water Power
[Courtesy of the Jervis Library, Rome, New York]
atop much of the waterway’s alignment from Scudders Falls down to Waterfront Park. The Water Power lives now in the archival record and the realm of archaeology. The remains of the wing dam and intake can be seen in the riverbed of the Delaware at Scudders Falls. A log basin has been incorporated into Mahlon Stacy Park just below the neighborhood known as “the island.” The abutments of the aqueduct that carried the Water Power over the Assunpink Creek survive downstream from South Warren Street, and the name “Power Street” tells of its course in South Trenton.

Industry at the Loop End of the Trenton Water Power
At the downstream end of the Trenton Water Power, beneath Waterfront Park and Riverview Executive Plaza, was a cluster of mills, one of which played an extraordinarily important role in American industry. When completed in 1834, the Water Power headrace looped down from a reservoir impounded by Federal Street, feeding a series of mill seats before emptying back into the Delaware River. In the late 1830s and 1840s, in the initial industrial development spurred by the Water Power, three textile mills came on line at the end of the looping raceway: the textile print works of the Union Manufacturing Company (established 1837); the cotton mills of the New England Manufacturing Company (founded in 1842; destroyed by fire 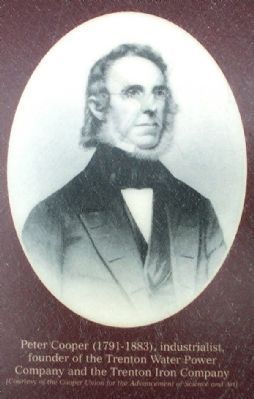 By Gary Nigh, December 2007
5. Peter Cooper (1791-1883),
industrialist, founder of the Trenton Power Company and the Trenton Iron Company
[Courtesy of the Cooper Union for the Advancement of Science and Art]
in 1850); and the mill later known as the Saxony Woolen Mill (established as a cotton mill by 1846).
The industry for which this area became internationally famous, however; was iron and steel manufacture. This began in the mid-1840s with Peter Cooper’s revival of the Trenton Water Power and the founding of the Trenton Iron Company, which resulted in a rolling mill being built adjacent to the New England cotton mills. This facility, a key hub in the expanding Cooper & Hewitt enterprises, soon overwhelmed two neighboring textile mills, underwent several upgrades and passed successively under the control of the Trenton Iron Company, the New Jersey Steel & Iron Company, the American Bridge Company and U.S. Steel. One of America’s most significant industrial sites, this plant produced: the first high quality iron and steel rails for the American railroads; the first structural I-beams; artillery carriages and gun-metal for the Union Army in the Civil War; the first steel made in the United States by the open hearth process; and countless materials for bridges and buildings all across the country and overseas. 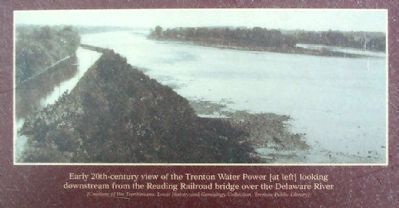 By Gary Nigh, December 2007
6. Early 20th-century view of the Trenton Water Power
[at left] looking downstream from the Reading Railroad bridge over the Delaware River
[Courtesy of the Trentoniana Local History and Genealogy Collection, Trenton Public Library]
40° 12.058′ N, 74° 45.543′ W. Marker is in Trenton, New Jersey, in Mercer County. Marker can be reached from New Jersey Route 29. This marker is in South River Walk park which is built over top of Route 29. Touch for map. Marker is in this post office area: Trenton NJ 08611, United States of America. Touch for directions.

More about this marker. The marker is in the northern half of the park at the top of the stairs leading from the parking lot between the park and the Riverfront Stadium. 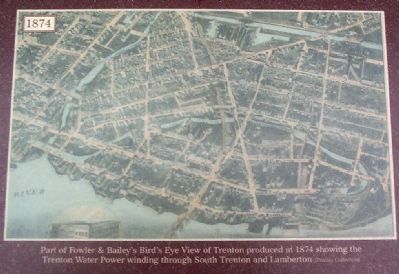 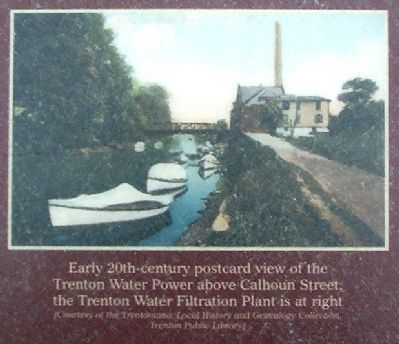 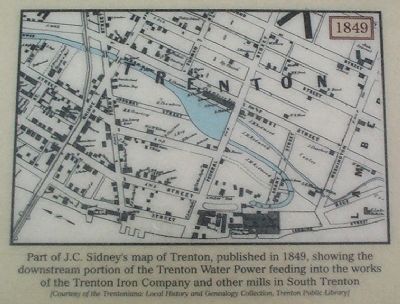 By Gary Nigh, December 2007
9. Part of J.C. Sidney’s map of Trenton, published in 1849,
showing the downstream portion of the Trenton Water Power feeding into the works of the Trenton Iron Company and other mills in South Trenton
[Courtesy of the Trentoniana Local History and Genealogy Collection, Trenton Public Library] 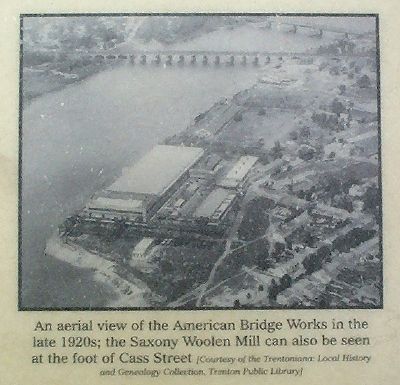 By Gary Nigh, December 2007
10. An aerial view of the American Bridge Works in the late 1920s;
the Saxony Woolen Mill can also be seen at the foot of Cass Street
[Courtesy of the Trentoniana Local History and Genealogy Collection, Trenton Public Library] 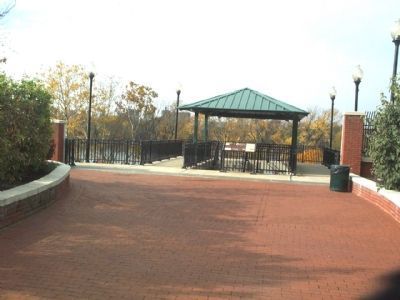