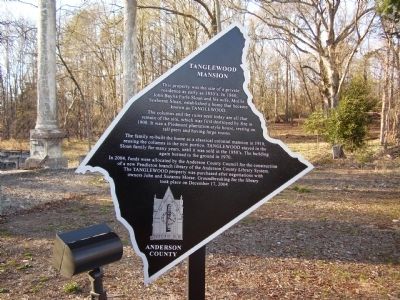 Photographed By Stanley and Terrie Howard, January 22, 2009
1. Tanglewood Mansion Marker
Inscription.
Tanglewood Mansion. . , This property was this site of a private residence as early as 1830's. In 1860, John Baylis Earle Sloan and his wife, Mollie Seaborne Sloan, established a home that became known as Tanglewood. , The columns and the ruins seen today are all that remain of the site, which was first destroyed by fire in 1908. It was a piedmont plantation-style house, resting on tall piers and having large rooms. , The family re-built the home as a classical colonial mansion in 1910, reusing the columns in the portico. Tanglewood stayed in the Sloan family for many years, until it was sold in 1950's. The building again burned to the ground in 1970. , In 2004, funds were allocated by the Anderson County Council for the construction of a new Pendleton branch library of the Anderson County Library System. The Tanglewood property was purchased after negotiations with owners John and Suzanne Morse. Groundbreaking for the library took place on December 17, 2004. . This historical marker was erected by Anderson County. It is in Pendleton in Anderson County South Carolina

This property was this site of a private residence as early as 1830's. In 1860, John Baylis Earle Sloan and his wife, Mollie Seaborne Sloan, established a home that became known as Tanglewood.

The columns and the ruins seen today are all that remain of the site, which was first destroyed by fire in 1908. It was a piedmont plantation-style house, resting on tall piers and having large rooms.

The family re-built the home as a classical colonial mansion in 1910, reusing the columns in the portico. Tanglewood stayed in the Sloan family for many years, until it was sold in 1950's. The building again burned to the ground in 1970.

In 2004, funds were allocated by the Anderson County Council for the construction of a new Pendleton branch library of the Anderson County Library System. The Tanglewood property was purchased after negotiations with owners John and Suzanne Morse. Groundbreaking for the library took place on December 17, 2004. 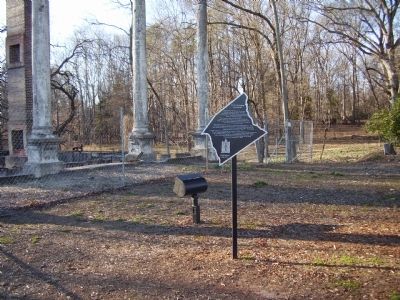 Click or scan to see
this page online
. A significant historical date for this entry is December 17, 2004.

More about this marker. The marker's shape is an outline of Anderson County, South Carolina.

A sign at the edge of Pendleton said everyone was welcome at the grand opening of the town’s new library.

Looking at the crowd outside the building Sunday afternoon, it seemed that everyone showed up.

“If there is any indication what this building means to Pendleton, all of the people here shows that y’all are excited,” 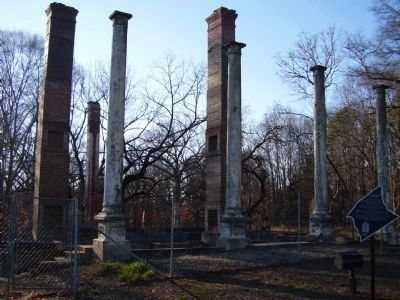 Photographed By Stanley and Terrie Howard, January 22, 2009
3. Tanglewood Mansion Marker
The original rock chimneys and front portico columns were all that remained from both fires. They were preserved on the site as a reminder of Pendleton’s history.
said Walter Warnock, chairman of the Anderson County Library System’s board of trustees.

The $3 million library was part of the Anderson County Library System’s long-range plan developed in 1996, County Administrator Joey Preston said. The new Pendleton Branch Library is one of the plan’s last projects to be completed, but it also is the largest branch in the library system.

The 12,000-square-foot building at 650 S. Mechanic St. is nearly seven times larger than the Pendleton branch’s previous location on Micasa Drive, and it houses 75,000 volumes compared to the former location’s 14,000-book capacity.

“You ain’t seen nothing yet,” Anderson County Library System Director Carl Stone told the crowd before the ribbon cutting.

Inside, the library’s amenities include a 75-seat meeting room, a room for children’s programs, an expanded periodical section, computers and a reading lounge overlooking the ruins of the former Tanglewood Mansion.

The mansion’s ruins are a well-know site around town. The original house was erected at the site in the early 1900s and burned down around 1970, Pendleton Mayor Carol Burdette said.

Mayor Burdette said she spent eight years pestering Anderson County Council members and Mr. Preston about when Pendleton would get a new library.

“It was worth the wait,” she said. 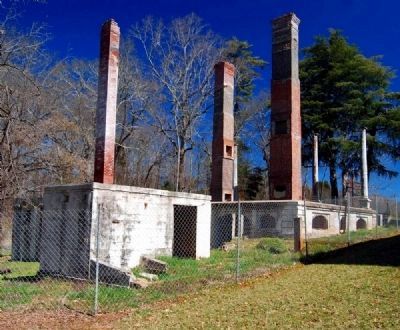 County officials also are planning to landscape around the Tanglewood Mansion ruins. That will include an iron fence and lighting, Mr. Preston said. In addition, he announced plans to build an amphitheater and reading garden on the grounds, beginning this fall. Both should be complete in fall 2008.

About 200 residents bolted through the doors after the ribbon-cutting ceremony, eager to get a first look at the new library. The town had outgrown the old facility, so this was much needed, said Phyllis Turner, an instructor at Tri-County Technical College.

The new Pendleton branch of the Anderson County Library system has risen like a phoenix from the ruins of the Tanglewood Mansion, where the original house burned in 1970. More than 30 years later, 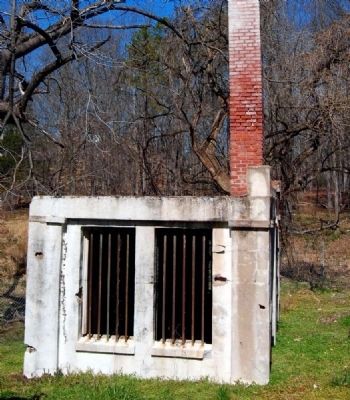 Photographed By Brian Scott, March 6, 2010
5. Tanglewood Mansion Ruins
75,000 opportunities to read, listen to music or see a movie are available with the new library’s bigger and better inventory. The previous facility had only 14,000 volumes, and no DVDs, books on CD or music CDs, according to Mary Beth Evans, community services coordinator.

The $3 million facility is part of the county library system’s long-range plan, according to County Administrator Joey Preston. Ms. Burdette’s self-described pestering was to Mr. Preston and members of Anderson County Council. And it lasted eight years, she said, but might also add that it was all worth it.

We’re proud for Pendleton residents and other Anderson County library cardholders (who now number 61,466, according to Ms. Evans). They have an outstanding facility that also includes a community meeting room for 75 people, a place for children’s programming, an expanded periodicals section, computers and a reading room.

On opening day, 177 people went through the building, and 50 new library cards were issued, according to Ms. Evans. Officials are aware that the current hours may not be adequate for what could be a very busy facility. According to Anderson County Library Director Carl Stone, “We have plans to open the library for longer hours or at least change the hours to be more convenient to the public until funding is available to extend the hours. We are working to 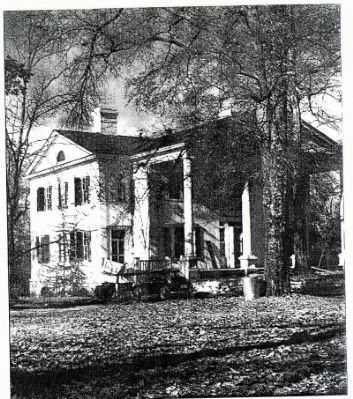 A library is more than a mere building, no matter how attractive. It is the building’s contents and the people who will take advantage of its amenities that will enhance its impact on the community.

A library is a gateway to knowledge, to exploration, to finding reason in a world that sometimes seems to have none. It is a place for research, whether through its books or its access to the World Wide Web. It can open our minds to faraway worlds and the beauty around us without our even stirring from a comfortable chair on a cold and rainy day.

And what we can find through exploration of a library can explain what may seem unexplainable, from the viewpoint of thousands of minds, the words of scholars and poets and novelists and biographers and analysts of everything from current events to ancient Rome.

A library is almost a living thing, more than the materials of which it is made, filled with ideas and opportunities, where new theories are born and where current thinking is enhanced, changed or substantiated through study.

And a public library can do all this for any member of the community who cares to take advantage of it.

A public library is a place where even the poorest among us can find a wealth of knowledge.

Of those 61,466 cardholders in the Anderson County Library system, 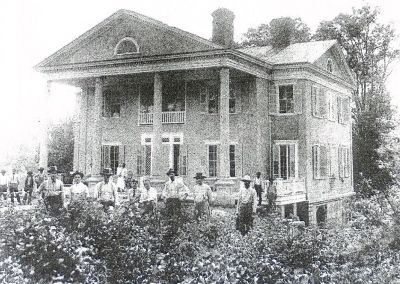 circa 1910
7. Tanglewood Mansion c.1910
50,896 are adults and 10,570 are children. We’d like to see more of both, that adults bring their children and grandchildren and children bring their parents. Getting a library card is easy.

What will be hard is finding the time to take advantage of all a library has to offer.
— Submitted April 17, 2010, by Brian Scott of Anderson, South Carolina.
3. A Fitting Tribute: Leigh Ann Carter’s Love of Community Will be Remembered
The Anderson Independent-Mail
April 15, 2008

Leigh Ann Carter was seriously ill with cancer when the Pendleton Branch Library moved into its beautiful new home in January 2007. She managed to stay at her job as branch manager for six months, succumbing to the disease that summer. Thanks to her widower and many friends in the community, Mrs. Carter will be remembered every time someone walks past a charming bronze sculpture seated on a bench on the entranceway walk.

The little bronze girl is one of several pieces of sculpture the library system has commissioned from Marietta, Ga., artists Donald Haugen and Tina Marie Stern.

She sits on the bench, engrossed in the book in her lap, and if you sit down beside her you can actually read the engraved words over her shoulder.

It was Mrs. Carter’s wish that this 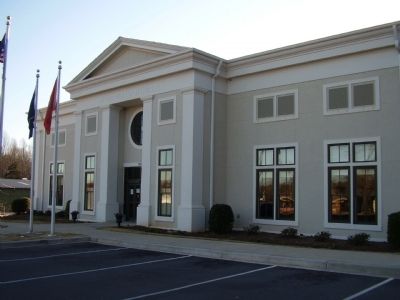 Photographed By Stanley and Terrie Howard, January 22, 2009
8. Pendleton Branch Libary
statue be erected in her honor. The $15,000 cost of the sculpture was raised by Curtis Carter,while the library system contributed the $500 cost of the bench. The installation is a perfect complement to the beautiful library building,which incorporates some of the ruins of the Tanglewood Mansion in its grounds and architecture.

Mrs. Carter was well known and very much beloved as branch manager. It was a tremendous joy for her to preside over the opening of the new building,which increased the branch’s floor space ten-fold, as well as adding many new services and amenities and tens of thousands of books.

“Leigh Ann Carter was a special part of Pendleton,” recalls Mayor Carol Burdette,who knew her well. “She and I talked about our new library almost every time we saw each other, and this was long before the county made plans to build the new building. Leigh Ann loved knowing people in the community were reading and taking advantage of the services of the library. I know she must have been smiling down from heaven when the bronze of the little girl reading was uncovered.”

Besides her prominent role in the library system, Mrs. Carter was mistress of an historic home, Mi Casa, built by the wife of Thomas Green Clemson in the mid-19th century. The Carters opened their home to official visitors to Pendleton on many occasions, Mayor Burdette 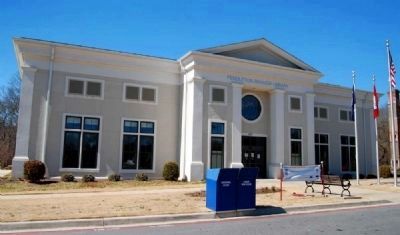 Mr. Carter continues to live at Mi Casa,which is near the new library. The community owes him thanks for giving such a fitting memorial of Leigh Ann to the public. But perhaps her best legacy is the library itself, which will continue to reflect her love and devotion to her community — and its readers — for many years to come.
— Submitted April 17, 2010, by Brian Scott of Anderson, South Carolina. 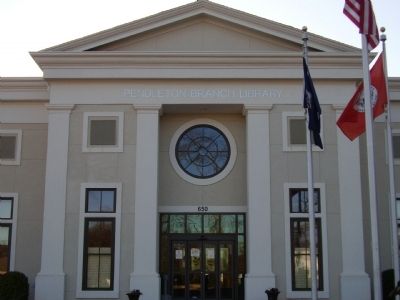 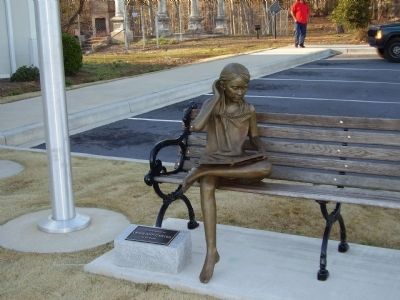 Photographed By Stanley and Terrie Howard, January 22, 2009
11. Bench Sculpture at the Library
This life-size bronze of a girl reading was created by Donald Haugen and Tina Marie Stern. It is in honor of Leigh Ann Carter, long time branch manager for the library. 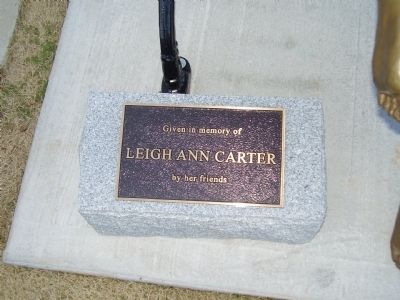