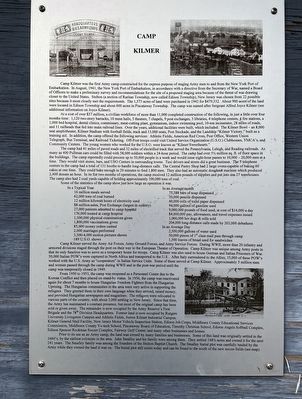 Camp Kilmer was the first Army camp constructed for the express purpose of staging Army men to and from the New York Port of Embarkation. In August, 1941, the New York Port of Embarkation, in accordance with a directive from the Secretary of War, named a Board of Officers to make a preliminary survey and recommendations for the site of a proposed staging area because of the threat of war drawing closer to the United States. Stelton (a section of Raritan Township, now called Edison Township), New Jersey was chosen from 22 possible sites because it most closely met the requirements. The 1,573 acres of land were purchased in 1942 for $479,532. About 900 acres of the land were located in Edison Township and about 600 acres in Piscataway Township. The camp was named after Sergeant Alfred Joyce Kilmer (see additional information on Joyce Kilmer). 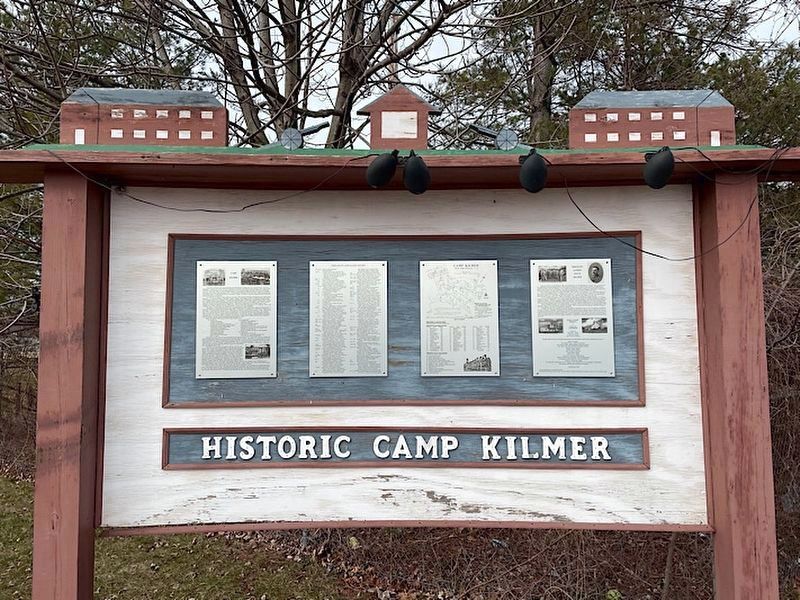 The camp had 41 miles of paved roads and 32 miles of electrified track that served the Pennsylvania, Lehigh, and Reading railroads. As camp many as 400 Pullman cars could be filled with 58,000 soldiers within a 24-hour period. The camp had over 52 million sq. ft. of floor space in the buildings. The camp reportedly could process up to 50,000 people in a week and would issue eight-hour passes to 10,000 – 20,000 men at a time. They would visit stores, bars, and USO Centers in surrounding towns. Taxi drivers and stores did a great business. The 5 telephone centers in the camp had 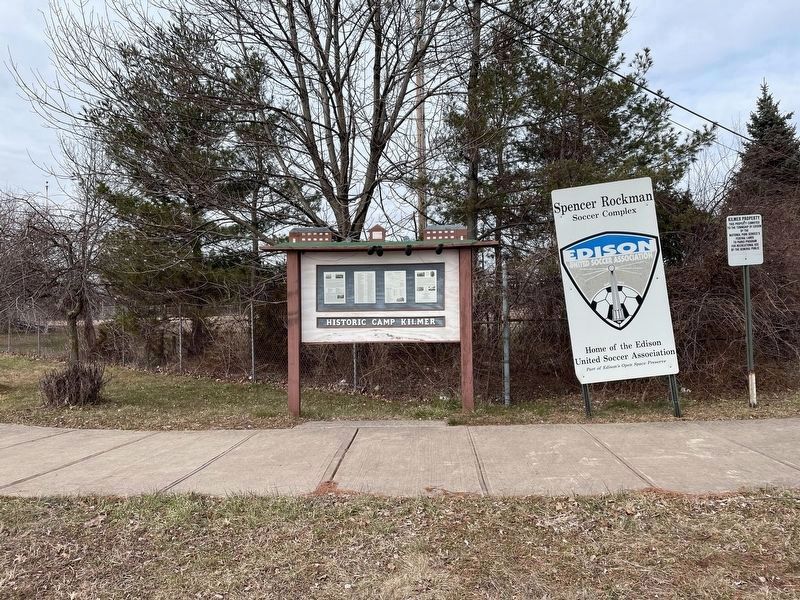 By David Weintraub, January 25, 2021
3. Camp Kilmer Marker
a total of 131 booths to handle long-distance calls. The Central Pastry Shop had 2 large ovens capable of baking 60 cakes at one time. They could bake enough in 20 minutes to feed 1,800 men. They also had an automatic doughnut machine which produced 2,400 donuts an hour. In its fist two months of operations, the camp received 12 million pounds of supplies and put into use 27 warehouses. The camp also had 2 coal yards capable of holding approximately 100,000 tons of coal.

Camp Kilmer served the Army Air Forces, Army Ground Forces, and Army Service Forces. During WWII, more than 20 infantry and armored divisions staged through the post on their way to the European Theater of Operation. Camp Kilmer was unique among Army posts in that its only function was to serve as a temporary home for troops. Camp Kilmer was also used to house German and Italian Prisoners of War. 50,000 Italian POW's were captured in North Africa and transported to the U.S.. After Italy surrendered to the Allies, 35,000 of these POW's worked with the U.S. Army as "cooperators” in Italian Service Units. Some of these served at Camp Kilmer. Approximately 5 million men and women passed through the camp during WWII and in the post-war period until the camp was temporarily closed in 1949.

From 1950 to 1953, the camp was reopened as a Personnel Center due to the Korean Conflict and then placed on stand-by status. In 1956, the camp was reactivated again for about 7 months to house Hungarian Freedom Fighters from the Hungarian Uprising. The Hungarian communities in the area were very active in supporting the refugees. They greeted them in their own language when they arrived, raised and provided Hungarian newspapers and magazines. The refugees were relocated to various parts of the country, with about 3,000 settling in New Jersey. Since that time, the Army has maintained a constant presence, but most of the original camp has been sold or given away. The remainder is now occupied by the Army Reserve's First Brigade and the 78th Division Headquarters. Former land is now occupied by Rutgers University Livingston Campus and Athletic Fields, Sutton Kilmer Industrial Campus, Kilmer General Mail Facility, New Jersey Motor Vehicle Inspection Station, Edison Job Corps, Middlesex County Educational Services Commission, Middlesex County Vo-tech School, Piscataway Board of Education, Timothy Christian School, Edison Angels Softball Complex, Edison Spencer Rockman Soccer Complex, Fairway Golf Center, and many other businesses and homes.

Prior to its use as an Army camp, the land was owned by many families and businesses. Some of this land was originally settled in the 1660's, by the earliest colonists in the area. John Smalley and his family were among them. They settled 148½ acres and owned it for the next 241 years. The Smalley family was among the founders of the Stelton Baptist Church. The Smalley burial plot was carefully tended by the Army while they owned the land it was on. The burial plot still exists today and can be found to the south of the new soccer fields (see map).

Topics. This memorial is listed in these topic lists: Forts and Castles • War, World II.

Location. 40° 31.181′ N, 74° 25.526′ W. Marker is in Edison, New Jersey, in Middlesex County. Memorial is at the intersection of Kilmer Road and Cliff Prescod Lane, on the left when traveling east on Kilmer Road. Touch for map. Marker is in this post office area: Edison NJ 08817, United States of America. Touch for directions.