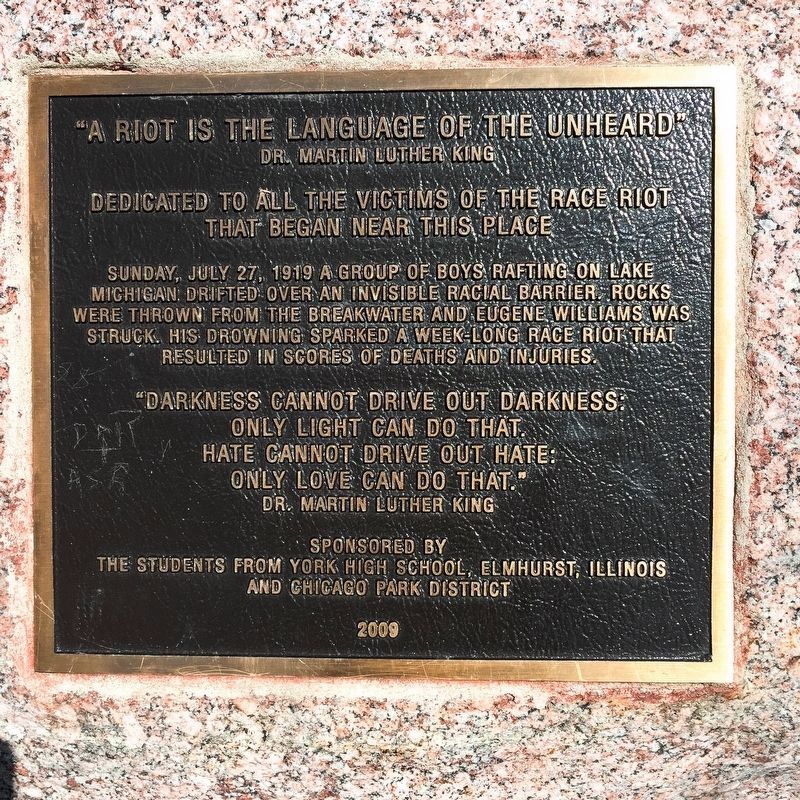 By Phyllis Prats, April 23, 2015
1. Eugene Williams Memorial Tablet
Inscription.
Eugene Williams Memorial. Dedicated to All the Victims of the Race Riot That Began Near This Place. “A riot is the language of the unheard.” . , Dr. Martin Luther King . . Sunday, July 27, 1919, a group of boys rafting on Lake Michigan drifted over an invisible racial barrier. Rocks were thrown from the breakwater and Eugene Williams was struck. His drowning sparked a week long race riot that resulted in scores of deaths and injuries. . . “Darkness cannot drive out darkness: only light can do that. Hate cannot drive out hate: only love can do that.” . , Dr. Martin Luther King. . This memorial was erected in 2009 by the students from York High School, Elmhurst, Illinois, and Chicago Park District.. It is in Chicago in Cook County Illinois

“A riot is the language of the unheard.”
—Dr. Martin Luther King

Sunday, July 27, 1919, a group of boys rafting on Lake Michigan drifted over an invisible racial barrier. Rocks were thrown from the breakwater and Eugene Williams was struck. His drowning sparked a week long race riot that resulted in scores of deaths and injuries. 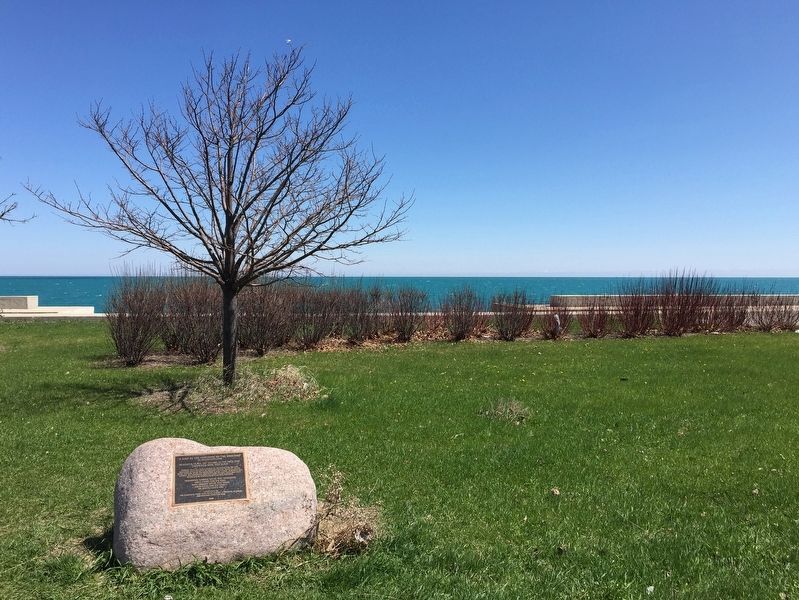 Also see . . .
1. The Murder of Eugene Williams and a Racial Reckoning. 2020 article by Claire Barrett on HistoryNet.com. Excerpt:

In July of that year, thousands of Chicagoans, amid the throes of a heatwave, thronged along the beaches of Lake Michigan. 29th Street beach was designated for whites and the 25th Street beach for blacks. This boundary even extended into the waters of Lake Michigan. On Sunday, July 27, Eugene Williams, a 17-year-old black youth, accidentally drifted into an area of water that was deemed to be for “whites only.”

One white beachgoer, indignant, began hurling rocks at Williams, causing the teen to drown. The pervading rumor was that Williams was struck in the head by one of the stones and drowned. Although in the autopsy, Williams’ body showed no bruises. The official coroner’s report cited that Williams drowned because the stone throwing kept him from coming to shore. 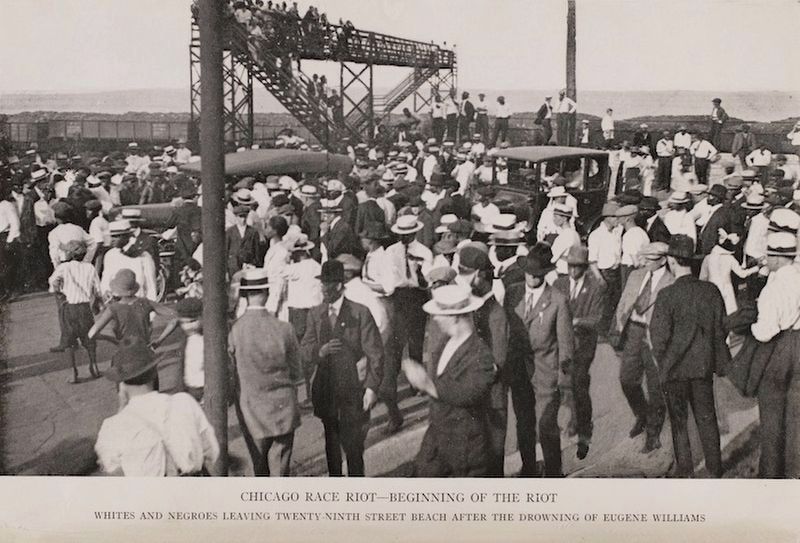 
On the beach, “guilt was immediately placed upon a certain white man by several Negro witnesses who demanded that he be arrested by a white policeman who was on the spot,” the study wrote. “No arrest was made.”

Tensions on the beach escalated and a skirmish ensued when the officer arrested a black man instead. “The riot was under way,” the study noted. Williams’ death was the spark that touched off nearly a week of active, violent protests. But it was just the spark. Deeply rooted factors and injustices within the city kindled the flame.

2. Red Summer In Chicago: 100 Years After The Race Riots. 2019 article by Karen Grisby Bates and Jason Fuller at NPR.org. Excerpt:

Her uncle was armed “with the biggest gun I had ever seen,” [Juanita] Mitchell [age 107] recalls. He was prepared to protect his family. So were many of the returning black veterans. A group of National Guard reserve men who’d returned from France after fighting valiantly there, broke into an armory and grabbed guns and other weapons, determined to protect black lives and property.

That resistance was a watershed, says Timuel Black Jr. “I understand that this was the first time these Northern Negroes fought back from an attack and been successful.”

So successful, in fact, that the riot soon wound down. 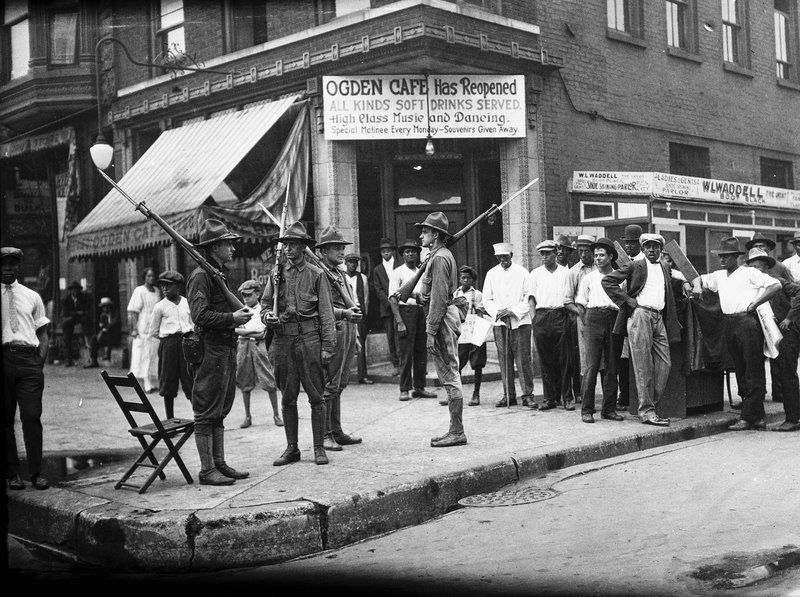 Juan Fujita, via Chicago History Museum, July 1919
4. Eugene Williams Memorial
what I’ve been told by my family who was here, the riot was soon over, because the Westside rioters felt they were in danger, now that these Negroes returning from the war had weapons equal to their weapons.”