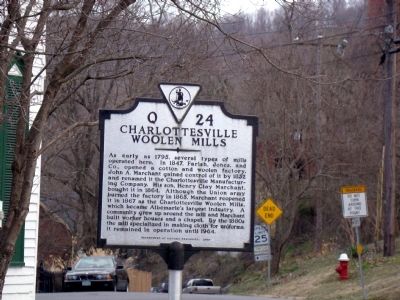 As early as 1795, several types of mills operated here. In 1847, Farish, Jones, and Co., opened a cotton and woolen factory. John A. Marchant gained control of it by 1852 and renamed it the Charlottesville Manufacturing Company. His son, Henry Clay Marchant, bought it in 1864. Although the Union army burned the factory in 1865, Marchant reopened it in 1867 as the Charlottesville Woolen Mills, which became Albemarle’s largest industry. A community grew up around the mill and Marchant built worker houses and a chapel. By the 1880s the mill specialized in making cloth uniforms; it remained in operation until 1964.

Topics and series. This historical marker is listed in this topic list: Industry & Commerce. In addition, it is included in the Virginia Department of Historic Resources series list. A significant historical year for this entry is 1795. 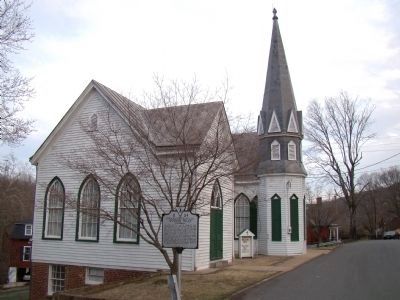 Click or scan to see
this page online
of Riverside Avenue, on the left when traveling east. Touch for map. Marker is in this post office area: Charlottesville VA 22902, United States of America. Touch for directions.

Also see . . .
1. Charlottesville Woolen Mills Chronology. Compiled by O. Allan Gianniny, Jr. “1887- Employees approached Marchant for money to help build a chapel. The mill gave $150 and bought a plot of land. Construction started in July, and by Christmas a Gothic style church, 20 feet by 40 feet had been erected. A Christmas program was held in the new building.” (Submitted on April 16, 2009.)

2. The Charlottesville Woolen Mills: Working Life, Wartime, and the Walkout of 1918. by Andrew H. Myers. “On this morning, the company experienced its first labor disturbance since opening in 1867. Eighteen workers walked out of the plant after the general manager refused to compensate them for wages 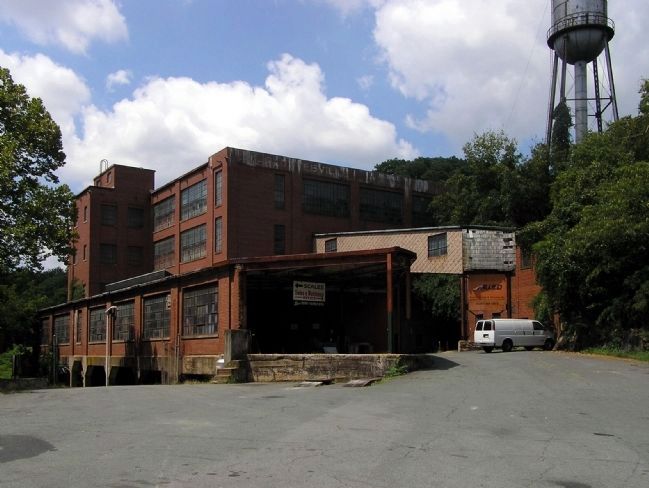 Photographed By Paul Crumlish, August 15, 2009
3. Charlottesville Woolen Mills
The remaining buildings of the Charlottesville Woolen Mills complex. Used today by Security Storage & Van Lines.
lost during a shutdown. This number comprised a relatively small percentage of the 130 or so employees, but the loss of skilled, experienced, hands struck a serious blow to management. Moreover, given the closely-interwoven nature of the Woolen Mills community, the unrest had great potential to spread. News of the incident made the front page of the local Daily Progress. So, too, did an advertisement for replacements.” (Submitted on April 16, 2009.)
Credits. This page was last revised on May 10, 2021. It was originally submitted on April 16, 2009, by J. J. Prats of Powell, Ohio. This page has been viewed 2,633 times since then and 45 times this year. Last updated on February 10, 2021, by Carl Gordon Moore Jr. of North East, Maryland. Photos:   1, 2. submitted on April 16, 2009, by J. J. Prats of Powell, Ohio.   3. submitted on August 15, 2009, by PaulwC3 of Northern, Virginia. • J. Makali Bruton was the editor who published this page.
Share this page.