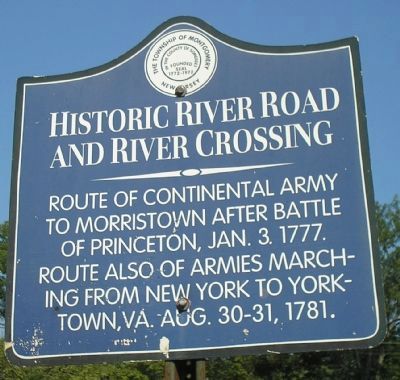 By Bill Coughlin, July 17, 2010
1. Historic River Road and River Crossing Marker
Inscription.
Historic River Road and River Crossing. . Route of Continental Army of Morristown after Battle of Princeton, Jan. 3, 1777. Route also of armies marching from New York to Yorktown, VA. Aug. 30-31, 1781. . This historical marker was erected by Township of Montgomery. It is Near Griggstown in Somerset County New Jersey

Erected by Township of Montgomery.

Topics and series. This historical marker is listed in these topic lists: Bridges & Viaducts • Colonial Era • War, US Revolutionary. In addition, it is included in the The Washington-Rochambeau Route series list. A significant historical date for this entry is January 3, 1777.

Location. 40° 26.348′ N, 74° 37.071′ W. Marker is near Griggstown, New Jersey, in Somerset County. Marker is on Griggstown Causeway just east of Millstone River Road, on the left when traveling west. Touch for map. Marker is in this post office area: Belle Mead NJ 08502, United States of America. Touch for directions.

Other nearby markers. At least 8 other markers are within 4 miles of this marker, measured as the crow flies. Griggstown Bridge Tender’s Station (approx. ¼ mile away); Washington’s Route from Princeton (approx. 0.6 miles away); Opie-Vanderveer Cemetery (approx. 2 miles away); Harlingen Road Bridge (approx. 2.4 miles away); The Titus Farm 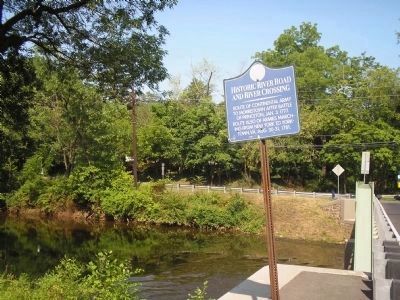 By Bill Coughlin, July 17, 2010
2. Marker in Griggstown
The Millstone River, crossed at this location on several occasions by the Continental Army, can be seen in this photo. 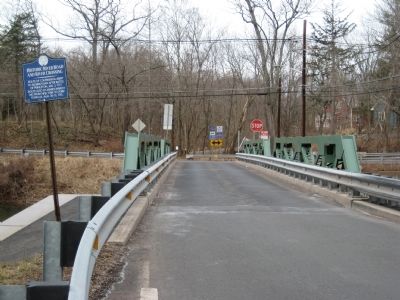