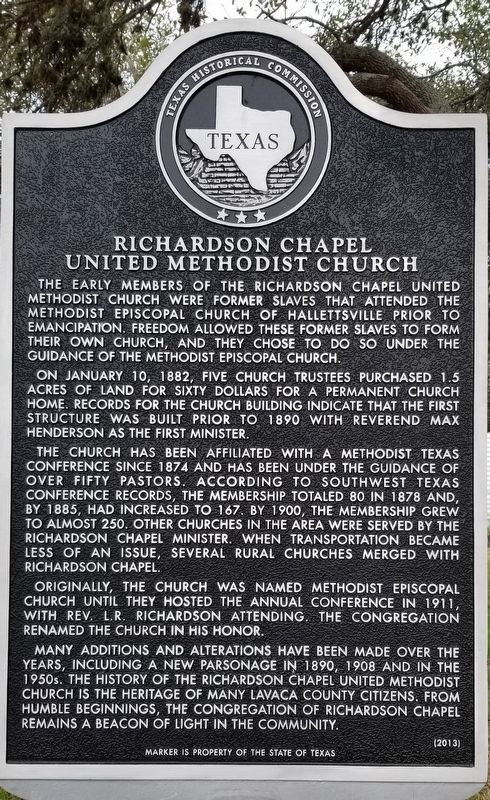 On January 10, 1882, five church trustees purchased 1.5 acres of land for sixty dollars for a permanent church home. Records for the church building indicate that the first structure was built prior to 1890 with Reverend Max Henderson as the first minister.

The Church has been affiliated with a Methodist Texas conference since 1874 and has been under the guidance of over fifty pastors. According to Southwest Texas Conference records, the membership totaled 80 in 1878 and, by 1885, had increased to 167. By 1900, the membership grew to almost 250. Other churches in the area were served by the Richardson Chapel minister. When transportation became less of an issue, several rural churches merged with Richardson Chapel.

Originally, the church was named Methodist Episcopal Church until they hosted the annual conference

By James Hulse, February 8, 2021
2. Richardson Chapel United Methodist Church and Marker
in 1911, with Rev. L.R. Richardson attending. The congregation renamed the church in his honor.

Many additions and alterations have been made over the years, including a new parsonage in 1890, 1908 and in the 1950s. The history of the Richardson Chapel United Methodist Church is the heritage of many Lavaca County citizens. From humble beginnings, the congregation of Richardson Chapel remains a beacon of light in the community.

Other nearby markers. At least 8 other markers are within walking distance of this marker. American Legion Hudgeons Post 230 (about 300 feet away, measured in a direct line); Old Hanging Tree (about 500 feet away); Entrance to Old Estate of John Hallett (approx. 0.2 miles away); Murchison Masonic Lodge (approx. 0.2 miles away); 50th Anniversary of Battle of Galveston