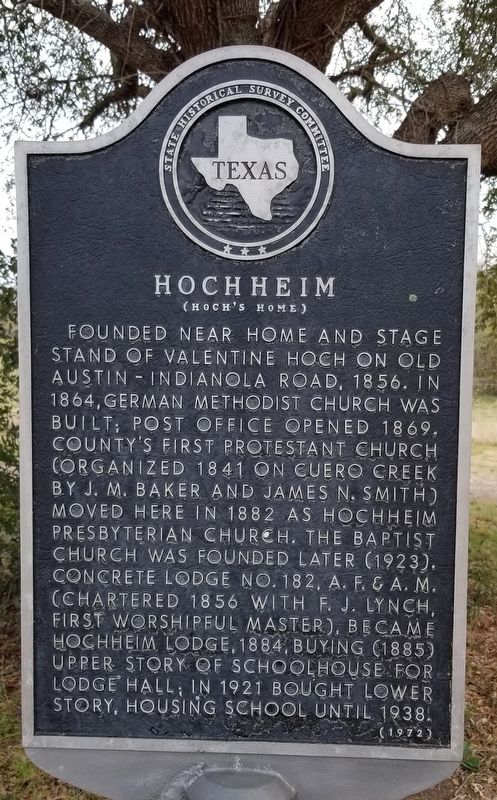 By James Hulse, February 8, 2021
2. The Hochheim Marker is the marker on the right of the two markers.
Highway 234), on the left when traveling south. Touch for map. Marker is in this post office area: Hochheim TX 77967, United States of America. Touch for directions.

Also see . . .  Hochheim, TX. Valentine Hoch arrived with his children at their DeWitt County homesite and in 1856, after several years' labor as a stonemason, completed a 2½-story house constructed of Guadalupe riverbank stones. Hoch later remarried and adopted his new wife's three daughters. After Hoch's settlement, at least six more families arrived, and the community was being called Hochheim and sometimes Dutchtown. The town, located on the stage route to Indianola and Austin, grew as a trading center. A post office was established there in 1870, when the settlement had two groceries, a drugstore, and a blacksmith shop.  Source: The Handbook of Texas (Submitted on February 21, 2021, by James Hulse of Medina, Texas.)

By James Hulse, February 8, 2021
3. The view of the Hochheim Marker from the road

By James Hulse, February 8, 2021
4. The Hochheim Lodge is located on Hochheim Cemetery Road.