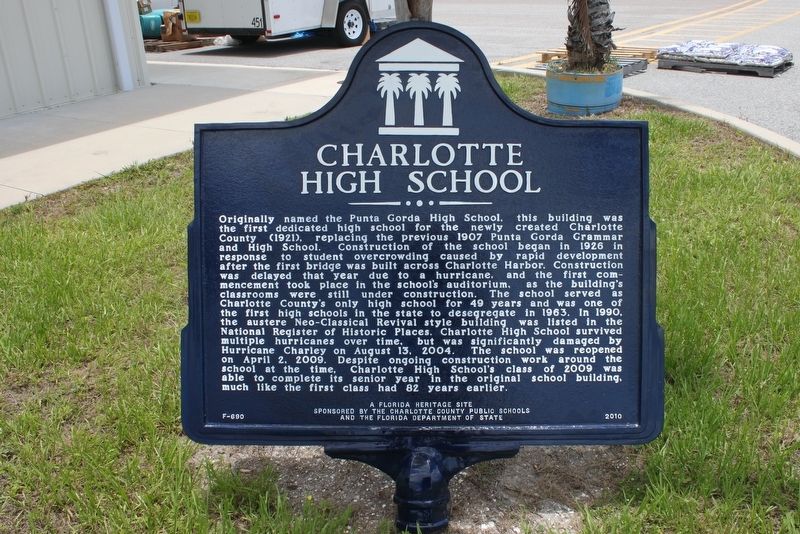 Originally named the Punta Gorda High School, this building was the first dedicated high school for the newly created Charlotte County (1921), replacing the previous 1907 Punta Gorda Grammar and High School. Construction of the school began in 1926 in response to student overcrowding caused by rapid development after the first bridge was built across Charlotte Harbor. Construction was delayed that year due to a hurricane, and the first commencement took place in the school’s auditorium, as the building’s classrooms were still under construction. The school served as Charlotte County’s only high school for 49 years and was one of the first high schools in the state to desegregate in 1964. In 1990, the austere Neo-Classical Revival style building was listed in the National Register of Historic Places. Charlotte High School survived multiple hurricanes over time, but was significantly damaged by Hurricane Charley on August 13, 2004. The school was re-opened on April 2, 2009. Despite ongoing construction work around the school at the time, Charlotte High School’s class of 2009 was able to complete its senior year in the original school building, 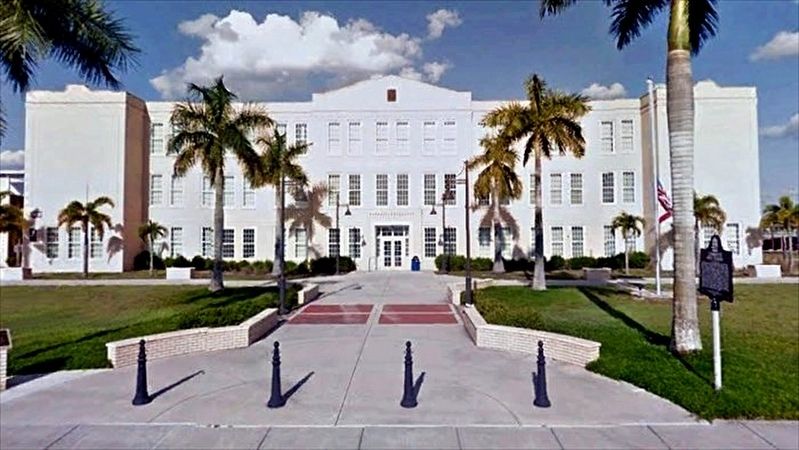 By Tim Fillmon, June 21, 2016
2. Charlotte High School Marker
much like the first class had 82 years earlier.

Erected 2010 by The Charlotte County Public Schools and the Florida Department of State. (Marker Number F-690.)

Topics. This memorial is listed in these topic lists: Architecture • Education • Settlements & Settlers.

Location. 26° 55.617′ N, 82° 2.366′ W. Marker is in Punta Gorda, Florida, in Charlotte County. Memorial is at the intersection of Cooper Street and East McKenzie Street, on the right when traveling north on Cooper Street. Touch for map. Marker is at or near this postal address: 1250 Cooper Street, Punta Gorda FL 33950, United States of America. Touch for directions.