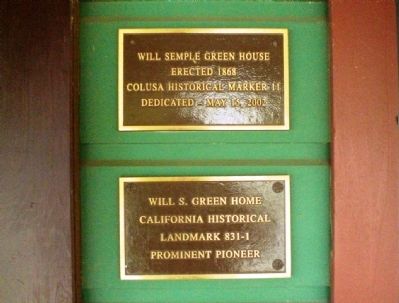 Topics and series. This historical marker is listed in this topic list: Notable Buildings. In addition, it is included in the California Historical Landmarks series list. A significant historical month for this entry is May 1895. 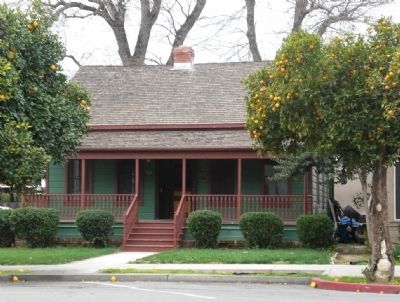 More about this marker. Marker is to the immediate right of the front door.

The lower marker refers to California Historical Landmark Number 831, located in Glenn County. That marker commemorates Green's posting of the first water diversion notice on an oak tree on the banks of the Sacramento in December, 1883. 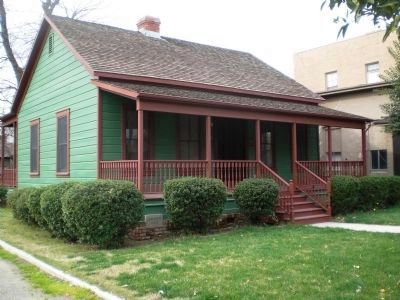 Photographed By Andrew Ruppenstein, February 28, 2009
3. Will Semple Green House
The house is notable for being one of the oldest homes extant in Colusa County, as well as for being the home of Will Semple Green (1832-1905), one of Colusa's most famous pioneers. Green is best known for being a newspaper editor, a holder of various political offices, and a major proponent of irrigation in the Sacramento River Valley.
Credits. This page was last revised on July 27, 2018. It was originally submitted on March 6, 2009, by Andrew Ruppenstein of Sacramento, California. This page has been viewed 1,224 times since then and 42 times this year. Photos:   1, 2, 3. submitted on March 6, 2009, by Andrew Ruppenstein of Sacramento, California. • Kevin W. was the editor who published this page.
Share this page.