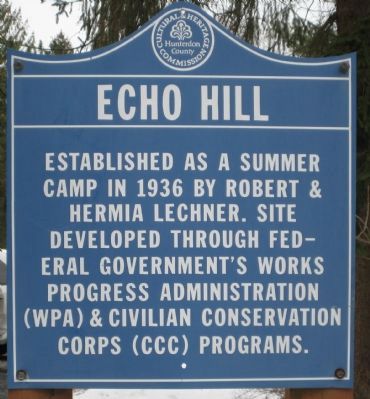 Topics and series. This historical marker is listed in these topic lists: Charity & Public Work • Parks & Recreational Areas. In addition, it is included in the Civilian Conservation Corps (CCC), the New Jersey, Hunterdon County Cultural and Heritage Commission, and the Works Progress Administration (WPA) projects series lists. A significant historical year for this entry is 1936.

Location. 40° 34.784′ N, 74° 52.008′ W. Marker is near Sunnyside, New Jersey, in Hunterdon County. Marker can be reached from Lilac Drive. Marker is inside the park. Touch for map. Marker is in this post office area: Flemington NJ 08822, United States of America. Touch for directions. 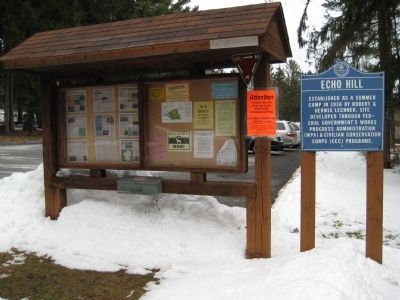 Regarding Echo Hill. Echo Hill was originally a farm that was established in 1836. The farm consisted of the stone house, a barn, chicken coops, and a peach orchard. In 1936, the property was purchased by Robert and Hermia Lechner who established a summer camp for boys. They called their facility “Camp - Echo Hill”. The first camp consisted of 65 boys. The camp was expanded the following year to permit girls. During the transition from farm to summer camp, many of the existing structures were demolished or converted to new uses. Salvaged beams from the barn were used in the dining hall (what is now the Main Lodge). The orchard was cut down and replaced by 200,000 evergreens by the Civilian Conservation Corps in 1939. In 1943, the Lechners acquired the Stanton Station Railroad Station from the Lehigh Valley Railroad for $75.00. This structure was transported to the property the same year and converted into what is now known as the South Activity 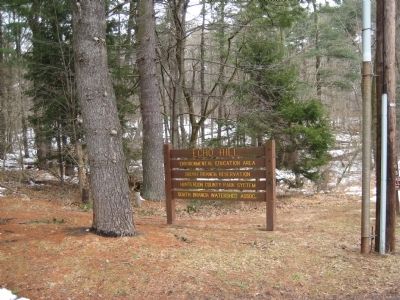 The Stone Farm House was originally the camp infirmary and then became the home for the Lechners in 1942. They retired from the camp in 1959 and sold the operation to a local church. The county acquired the property in 1973. Today, Echo Hill still continues its tradition of teaching local children about nature through the Summer Nature Program and other scheduled or requested programs.
Source: Hunterdon County Department of Parks and Recreation