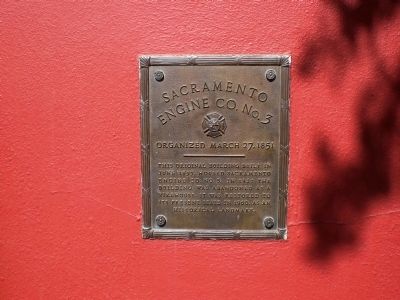 This original building built in 1853, housed Sacramento Engine Company No. 3. In 1921 the building was abandoned as a firehouse. It was restored to its present state in 1960, as an historical landmark.

Topics. This historical marker is listed in this topic list: Notable Buildings. A significant historical year for this entry is 1853.

More about this marker. Marker is to the right of the entrance.

Regarding Sacramento Engine Company No. 3. 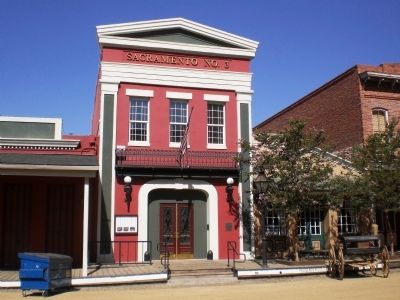 Click or scan to see
this page online
On the night of November 2nd, 1852, much of Sacramento west of 9th Street burned down. As a result, the city funded the construction of 9 fire stations, including this one, as well as a waterworks to supply water not only for drinking, but for firefighting, as well. Constructed in Greek Revival style for a cost of $10,000, this building served as a firehouse from 1853 to 1921. It subsequently served as a warehouse for Finegold & Company. In 1960, this was the first building restored within the newly designated historic district, and it opened then as a restaurant, which it still is today. Ronald Reagan held both of his gubernatorial inaugural dinners here. This building is located in the Old Sacramento Historic District. 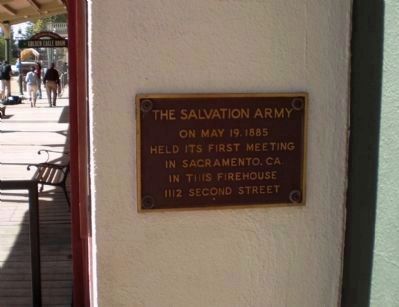 Photographed By Andrew Ruppenstein, September 1, 2008
3. Sacramento Engine Company No. 3 Firehouse - Salvation Army Marker
"The Salvation Army on May 19, 1885 held its first meeting in Sacramento, CA. in this firehouse 1112 Second Street". This was six years after the first Salvation Army meeting in the US in Philadelphia. (Marker is located to the immediate left of the entrance.) 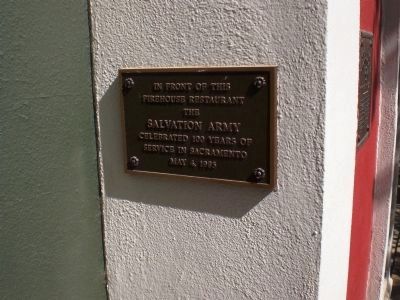 Photographed By Andrew Ruppenstein, September 1, 2008
4. Salvation Army 100th Anniversary Marker
"In front of this Firehouse Restaurant the Salvation Army celebrated 100 years of service in Sacramento May 4, 1985". (Marker is to the immediate right of the entrance.) 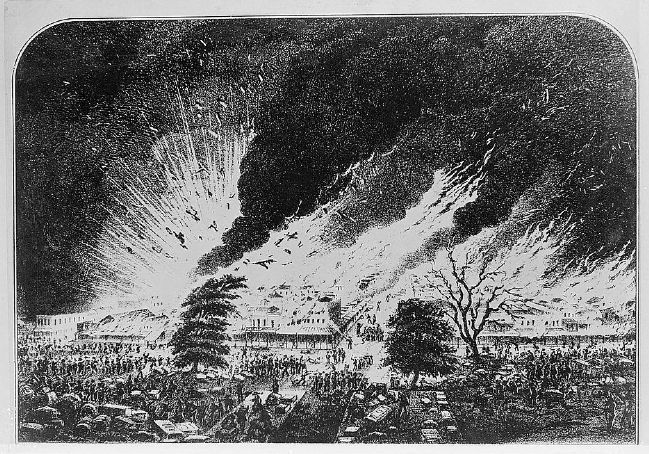