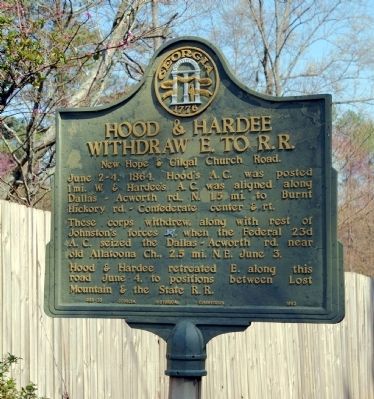 Other nearby markers. At least 8 other markers are within 3 miles of this marker, measured as the crow flies. Dallas – Acworth Road (within shouting distance of this marker); Battle of Pickett's Mill (approx. ¾ mile away); James Foster House (approx. 1.4 miles away); a different marker also named Battle of Pickett’s Mill (approx. 1.9 miles away); Site of Old Allatoona Church (approx. 2.4 miles away); Cross Roads Church (approx. 2½ miles away); Davis' Cross Roads (approx. 2.6 miles away); Brown's Mill (approx. 2.6 miles away). Touch for a list and map of all markers in Acworth.
Credits. This page was last revised on June 16, 2016. It was originally submitted on March 14, 2009, by David Seibert of Sandy Springs, Georgia. This page has been viewed 879 times since then and 25 times this year. Photo   1. submitted on March 14, 2009, by David Seibert of Sandy Springs, Georgia. • Craig Swain was the editor who published this page.