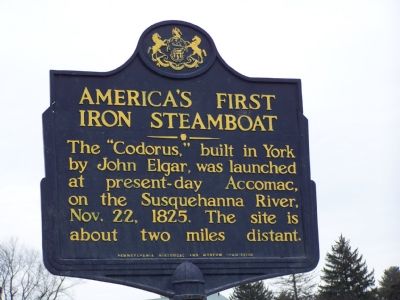 Photographed By Beverly Pfingsten, January 26, 2008
1. America's First Iron Steamboat Marker
Inscription.
America's First Iron Steamboat. . The "Codorus," built in York by John Elgar, was launched at present-day Accomac, on the Susquehanna River, Nov. 22, 1825. The site is about two miles distant. . This historical marker was erected by Pennsylvania Historical and Museum Commission. It is Near Wrightsville in York County Pennsylvania

The "Codorus," built in York by John Elgar, was launched at present-day Accomac, on the Susquehanna River, Nov. 22, 1825. The site is about two miles distant.

Topics and series. This historical marker is listed in these topic lists: Industry & Commerce • Waterways & Vessels. In addition, it is included in the Pennsylvania Historical and Museum Commission series list. A significant historical date for this entry is November 22, 1825. 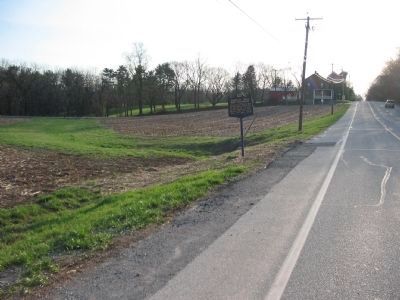 In 1825, the majority attitude was, “wood floated and iron sank, why would anybody build a boat out of iron?” However those individuals familiar with the work of Archimedes, knew an iron-hulled boat was possible.

In designing his Iron Steamboat, it is obvious that John Elgar knew about the principle of buoyancy. His formal education consisted of no more than the third grade, however that did not keep him from being self taught; reading any book that he could get his hands on. Likely one of those books presented principles developed by the ancient Greek scientist Archimedes; one of which established that the buoyant force, i.e. upward force, of an object in a fluid is equal to the weight of the fluid displaced by the object.