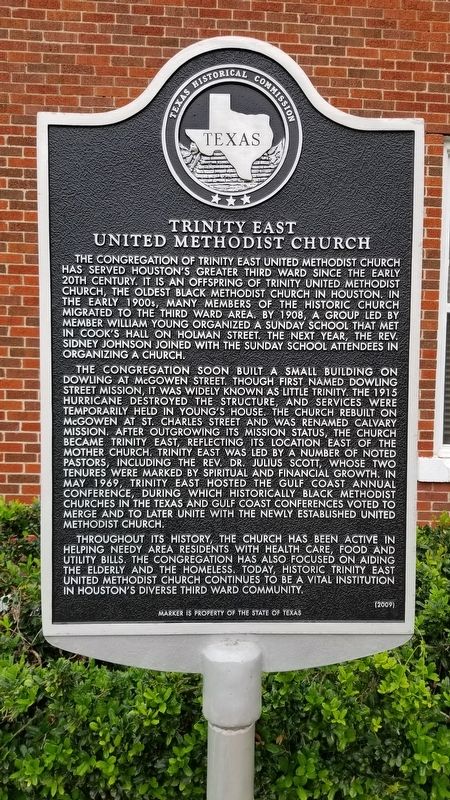 The congregation of Trinity East United Methodist Church has served Houston's Greater Third Ward since the early 20th century. It is an offspring of Trinity United Methodist Church, the oldest black Methodist Church in Houston. In the early 1900s, many members of the historic church migrated to the Third Ward area. By 1908, a group led by member William Young organized a Sunday school that met in Cook's hall on Holman Street. The next year, the Rev. Sidney Johnson joined with the Sunday school attendees in organizing a church.

The congregation soon built a small building on Dowling at McGowen Street. Though first named Dowling Street Mission, it was widely known as Little Trinity. The 1915 hurricane destroyed the structure, and services were temporarily held in Young's house. The church rebuilt on McGowen at St. Charles Street and was renamed Calvary Mission after outgrowing its mission status, the church became Trinity East, reflecting its location east of the mother church. Trinity East was led by a number of noted pastors, including the Rev. Dr. Julius Scott, whose two tenures were marked by spiritual and financial growth. 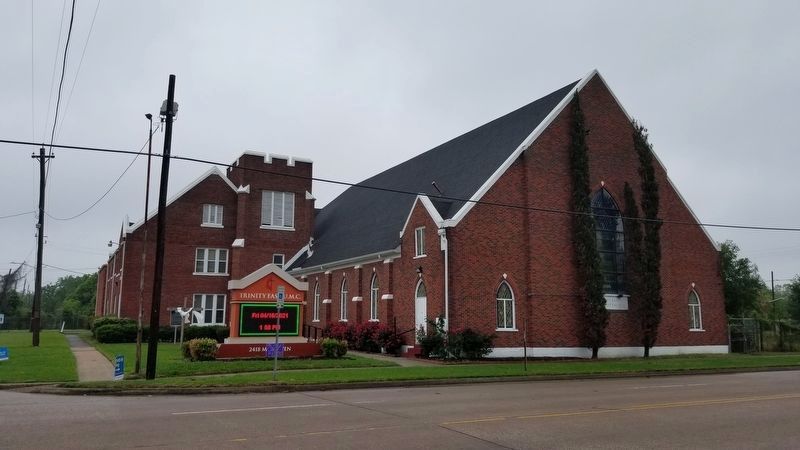 By James Hulse, April 16, 2021
2. The view of the Trinity East United Methodist Church and Marker from across the street

Click or scan to see
this page online
In May 1969, Trinity East hosted the Gulf Coast Annual Conference, during which historically black Methodist churches in the Texas and Gulf Coast Conferences voted to merge and to later unite with the newly established United Methodist Church.

Throughout its history, the church has been active in helping needy area residents with health care, food and utility bills. The congregation has also focused on aiding the elderly and the homeless. Today, historic Trinity East United Methodist Church continues to be a vital institution in Houston's diverse Third Ward community.

Topics. This historical marker is listed in these topic lists: African Americans • Churches & Religion. A significant historical month for this entry is May 1969.