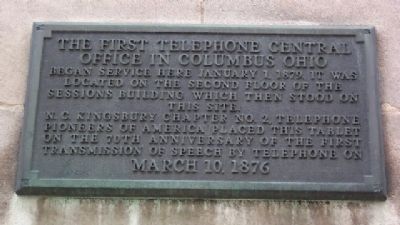 Began service here January 1, 1879. It was located on the second floor of the Sessions Building which then stood on this site.
N. C. Kingsbury Chapter No. 2, Telephone Pioneers of America placed this tablet on the 70th anniversary of the first transmission of speech by telephone on March 10, 1876

Topics. This historical marker is listed in these topic lists: Communications • Notable Events. A significant historical month for this entry is January 1916.

Other nearby markers. At least 8 other markers are within walking distance of this marker. Columbia Building (about 400 feet away, measured in a direct line); American Federation of Labor / United Mine Workers of America (about 800 feet away); William Green, Labor Leader / The Columbus Streetcar Strike, 1910 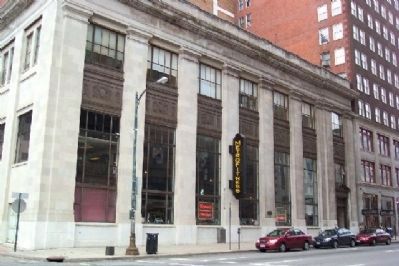