This panoramic map of Point Marion as seen from the northwest was published in 1902, when the Dillinger family’s Point Marion Ferry was still busy transporting horse-drawn vehicles and pedestrians across the Monongahela River. Cartographer T.M. Fowler included the ferry in his birds-eye view of the Borough, along with the two nineteenth-century dwellings on the “Ferry Lot,” beside the eastern ferry landing (see detail). A century later, the Ferry Lot residences were determined eligible for listing in the National Register of Historic Places in light of their association with one of the Mon Valley’s historic river crossings.

FERRY SERVICE across the Monongahela River between Springhill Township, Fayette County and Dunkard Township, Greene County was inaugurated in 1847 by Ambrose Dillinger (sometimes spelled "Dilliner"), who owned a farm encompassing the western ferry landing. Simultaneously, Ambrose's brother, Jacob, erected one of Point Marion's first dwellings on a lot encompassing the eastern ferry landing. Jacob leased this building to tenants until 1856, 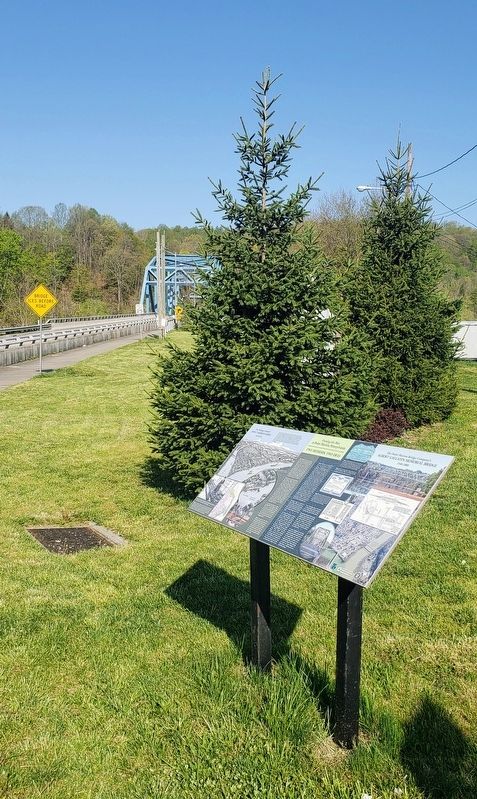 Photographed By Bradley Owen, April 23, 2021
2. Crossing the Mon at Point Marion, Pennsylvania Marker
Bridge is seen in the distance.

Click or scan to see
this page online
when he conveyed "the Ferry Lot" to Ambrose.

From his home base in Dunkard Township, Ambrose Dillinger, farmed and operated the Point Marion Ferry for the next several decades. His son William Leonard ("Len") Dillinger joined the ferry business around the time of his marriage in 1876. Len is believed to have built the second residence on the Ferry Lot. The Dillingers and several business associates incorporated the "Point Marion Ferry Company" in 1893, around which time Len assumed all of the ferryman's duties. Ambrose enjoyed a long retirement, living three months beyond his 100th birthday in 1915. Len operated the Point Marion Ferry another 16 years.

In the early Automotive Era following World War I, Len Dillinger offered ferry service at Point Marion around the clock. He could transport as many as three cars and several pedestrians across the river at the same time. His boat was pulled from one shore to the other by an electric motor, tow rope, and pulley system.

Dillinger operated the Point Marion Ferry until a bridge was built across the Mon at the ferry site, rendering his services obsolete. He made his last crossing as a ferryman on February 26, 1931. Later that day, he sold the physical assets of the Point Marion Ferry Company to engineer J.L. Harrington, designer of the recently opened Albert Gallatin Memorial Bridge.

Photographed By Bradley Owen, April 23, 2021
3. Albert Gallatin Memorial Bridge
View is looking west.
1928, after an unsuccessful effort to convince Fayette and Greene County Commissioners to erect a bridge across the Monongahela River at Point Marion, the Point Marlon Community Club appointed a committee to explore the possibility of building such a bridge as a private venture. Early in this process, the committee commissioned the Kansas City engineering firm of Harrington and Cortelyou to design a two-lane steel bridge sufficient to span the Mon just upstream from the Point Marion Ferry crossing. American bridge designers had favored cantilever trusses for major river spans since the late nineteenth century, so it followed that the plan drawn up by engineer John Lyle Harringtown called for a five-span structure featuring a "floating" or suspended central cantilever truss span 464 feet in length, supported at either end by two 138-feet cantilever truss spans, which were in turn anchored by a pair of 35-foot multistringer spans.

Harrington's design was approved in August 1928, and the planning committee proceeded to price out the project and raise funds. The venture became official on March 29, 1929 when the Point Marion Bridge Company was incorporated.

The General Contracting Corporation of Pittsburgh, began constructing the bridge's reinforced concrete substructure in September 1929. The steel superstructure was fabricated and installed early the following 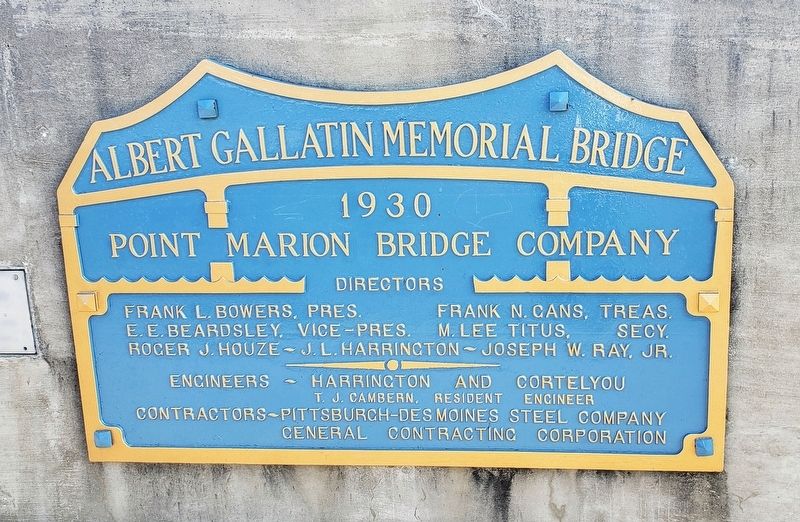 Photographed By Bradley Owen, April 23, 2021
4. Plaque Located On Bridge
year by the Pittsburgh-Des Moines Steel Company of Pittsburgh. At a dedication ceremony held on Saturday, June 7, 1930, the $250,000 span was christened "Albert Gallatin Memorial Bridge" in honor of the celebrated statesman, diplomat, financier, historian, ethnologist, industrialist, and farmer (1761-1849) best remembered for his 13-year tenure as Secretary of the Treasury during the Jefferson and Madison administrations. Gallatin's frontier

Shareholders in the Point Marion Bridge Company earned dividends through the collection of tolls set at 25 cents per motor vehicle and 10 cents per pedestrian. Tolls were collected, and dividends were paid, for a quarter-century. The State Highway Department acquired the bridge on May 15, 1957 and opened it to toll-free travel.

In a major rehabilitation of the bridge carried out in 1970, an open-grid steel deck was installed, the substructure was repaired, sidewalks were added, and new navigational lights were mounted. As a rare example of a cantilever truss bridge featuring Warren through trusses, the Albert Gallatin Memorial Bridge was listed in the National Register of Historic Places in 1988 under the name "Point Marion Bridge."

Above: A ferryman guides his ferryboat across an ice-laden river somewhere in the Mon Valley in the early years of the twentieth century.

Above: Having defied the elements for three-quarters of a century, matching bridge plaques were still mounted above the bridge's eastern portal (above) and western portal in 2007, acknowledging the parties responsible for conceiving, designing, and constructing the bridge.

Below: Shares in the Point Marion Bridge Company were sold as late as October 1950, just months before the bridge was purchased by the State Highway Department.

Right: Details from the Bridge Plan specify the design of the toll collector's house constructed a few feet east of the eastern portal, as well as the style of three lighting fixtures and brackets installed on the bridge trusses (two similar fixtures were mounted on poles at either approach to the bridge).

On a General Plan & Elevation of the proposed "Monongahela River Bridge," drafted by John Lyle Harrington in August 1928, the landings of Len Dillinger’s Point Marion Ferry are highlighted in yellow.