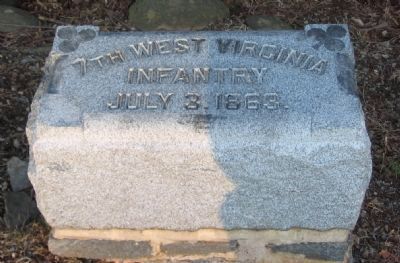 Location. 39° 49.331′ N, 77° 13.66′ W. Marker is in Cumberland Township, Pennsylvania, in Adams County. Memorial is on Wainwright Avenue, on the right when traveling north. Located on East Cemetery Hill in Gettysburg National Military Park. Touch for map. Marker is in this post office area: Gettysburg PA 17325, United States of America. Touch for directions. 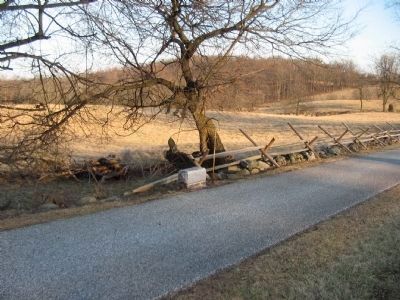 Photographed By Craig Swain, February 21, 2009
2. 7th West Virginia Infantry Marker
Late in the evening of July 2, the 7th West Virginia entered the fighting on East Cemetery Hill as it's parent Brigade (Carroll's) responded to the Confederate breakthrough in the lines. After assisting in the recovery of Ricketts' guns, the West Virginians charged down hill to restore the line. After the charge, the regiment moved into line at this point, remaining here the remainder of the battle.

Click or scan to see
this page online
(about 300 feet away, measured in a direct line); Attack on Cemetery Hill (about 400 feet away). Touch for a list and map of all markers in Cumberland Township.