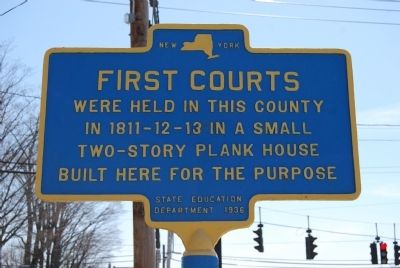 By Mike Wintermantel, April 21, 2013
1. First Courts Marker
Inscription.
First Courts. . Were held in this county in 1811-12-13 in a small two-story plank house built here for the purpose . This historical marker was erected in 1936 by State Education Department. It is in Mayville in Chautauqua County New York

Location. 42° 15.264′ N, 79° 30.297′ W. Marker is in Mayville, New York, in Chautauqua County. Marker is at the intersection of North Erie Street (New York State Route 394) and East Chautauqua Street (New York State Route 430), on the right when traveling north on North Erie Street. Located on the grounds of Mayville Town Hall. Touch for map. Marker is in this post office area: Mayville NY 14757, United States of America. Touch for directions. 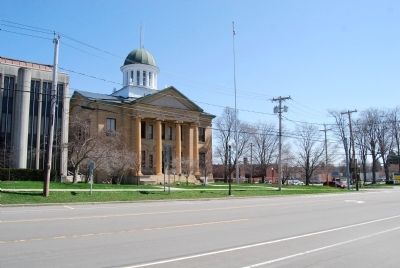 Click or scan to see
this page online
(within shouting distance of this marker); Site of Scott Tavern (about 300 feet away, measured in a direct line); Donald McKenzie (about 800 feet away). Touch for a list and map of all markers in Mayville.
Credits. This page was last revised on May 8, 2021. It was originally submitted on April 22, 2013, by Mike Wintermantel of Pittsburgh, Pennsylvania. This page has been viewed 305 times since then and 23 times this year. Last updated on May 8, 2021, by Bradley Owen of Morgantown, West Virginia. Photos:   1, 2. submitted on April 22, 2013, by Mike Wintermantel of Pittsburgh, Pennsylvania. • J. Makali Bruton was the editor who published this page.
Share This Page.