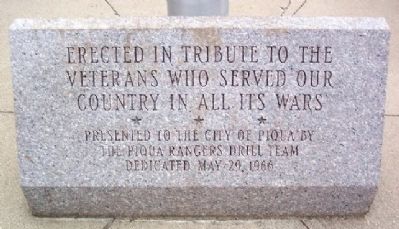 Photographed By William Fischer, Jr., March 6, 2009
1. Piqua Veterans Memorial Marker
Inscription.
Piqua Veterans Memorial. .
Erected in tribute to the veterans who served our country in all its wars, Presented to the City of Piqua by the Piqua Rangers Drill Team Dedicated May 29, 1966. . This memorial was erected in 1966 by Piqua Rangers Drill Team. It is in Piqua in Miami County Ohio

Presented to the City of Piqua by
the Piqua Rangers Drill Team
Dedicated May 29, 1966

Topics. This historical marker and memorial is listed in this topic list: Military. A significant historical date for this entry is May 29, 1898.

Location. 40° 8.914′ N, 84° 14.409′ W. Marker is in Piqua, Ohio, in Miami County. Marker is on High Street, on the right when traveling east. Marker is at the base of the flag pole in the park just south of the historic Orr-Statler Building (Piqua Public Library). Touch for map. Marker is at or near this postal address: 116 W High Street, Piqua OH 45356, United States of America. Touch for directions. 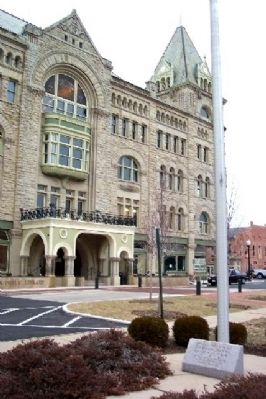