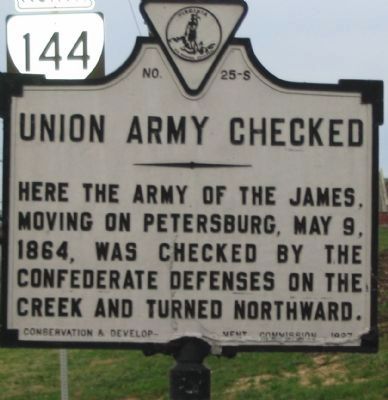 Photographed By Craig Swain, November 22, 2008
1. Union Army Checked Marker
Inscription.
Union Army Checked. . Here the Army of the James, moving on Petersburg, May 9, 1864, was checked by the Confederate defenses on the creek and turned northward. . This historical marker was erected in 1927 by Conservation and Development Commission. It is in Pickadat Corner in Chesterfield County Virginia

Here the Army of the James, moving on Petersburg, May 9, 1864, was checked by the Confederate defenses on the creek and turned northward.

Topics and series. This historical marker is listed in this topic list: War, US Civil. In addition, it is included in the Virginia Department of Historic Resources series list. A significant historical date for this entry is May 9, 1800.

Other nearby markers. At least 8 other markers are within 2 miles of this marker, measured as the crow flies. Swift Creek Battlefield: A Landscape of Change (within shouting distance of this marker); Battle of Swift Creek (approx. 0.2 miles away); "Brave to Madness" (approx. ¼ mile away); Electric Railway (approx. half 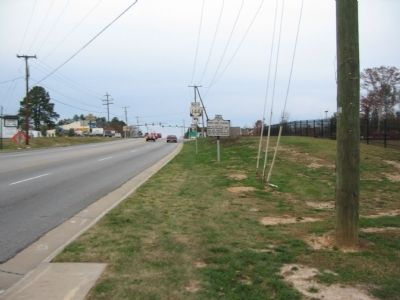 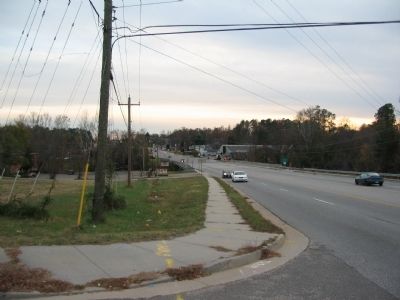 Photographed By Craig Swain, November 22, 2008
3. Swift Creek Battlefield
Looking from the marker location to the south at the Swift Creek bridge. The Federals occupied positions roughly were the marker is located today, across the ridge line overlooking the creek. The Confederates blocked the advance further south with defensive works on the south side of the creek.
Credits. This page was last revised on May 12, 2021. It was originally submitted on December 23, 2008, by Craig Swain of Leesburg, Virginia. This page has been viewed 1,011 times since then and 20 times this year. Last updated on May 11, 2021, by Bradley Owen of Morgantown, West Virginia. Photos:   1, 2, 3. submitted on December 23, 2008, by Craig Swain of Leesburg, Virginia. • J. Makali Bruton was the editor who published this page.
Share this page.