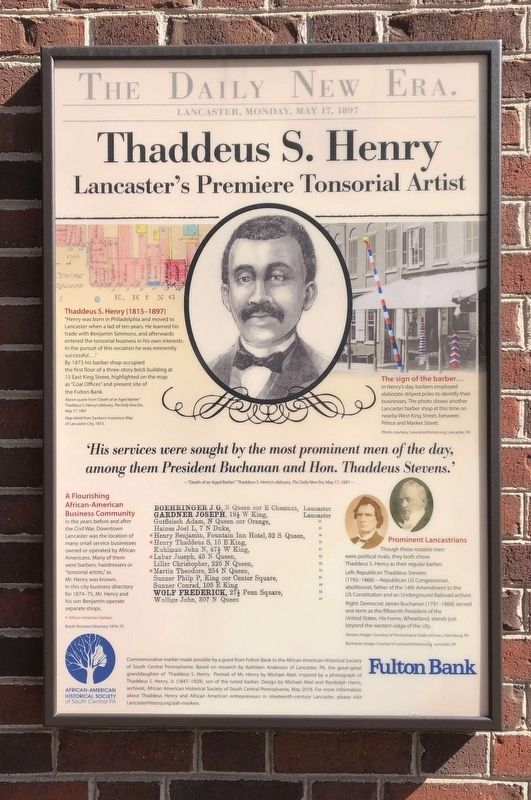 Thaddeus S. Henry (1815-1897)
"Henry was born in Philadelphia and moved to Lancaster when a lad of ten years. He learned his trade with Benjamin Simmons, and afterwards entered the tonsorial business in his own interests. In the pursuit of this vocation he was eminently successful...."

By 1873 his barber shop occupied the first floor of a three-story brick building at 15 East King Street, highlighted on the map as "Coal Offices" and present site of the Fulton Bank.

Above quote from "Death of an Aged Barber Thaddeus S. Henry's obituary, The Daily New Era, May 17, 1897. Map detail from Sanborn Insurance Map of Lancaster City, 1873.

"His services were sought by the most prominent men of the day, among them President Buchanan and Hon. Thaddeus Stevens." -- "Death of an Aged Barber" Thaddeus S. Henry's obituary, The Daily New Era, May 17, 1897

In the years before and after the Civil War, Downtown Lancaster was the location of many small service businesses owned or operated

2. The sign of the barber...
In Henry's day, barbers employed elaborate striped poles to identify their businesses. The photo shows another Lancaster barber shop at this time on nearby West King Street, between Prince and Market Street

Click or scan to see
this page online
by African Americans. Many of them were barbers, hairdressers or "tonsorial artists," as Mr. Henry was known. In this city business directory for 1874-75, Mr. Henry and his son Benjamin operate separate shops. 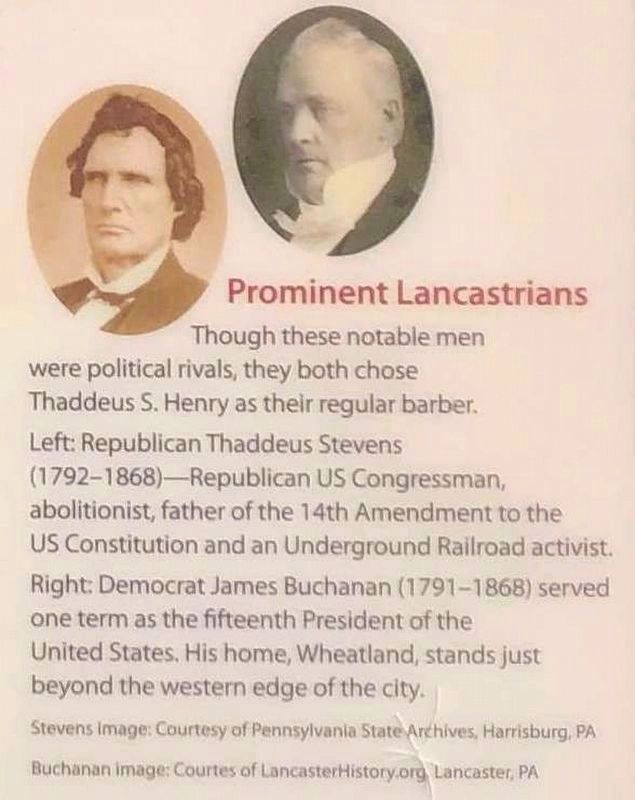 3. Prominent Lancastrians
Though these notable men were political rivals, they both chose Thaddeus S. Henry as their regular barber

Left: Republican Thaddeus Stevens (1792-1868)—Republican US Congressman, abolitionist, father of the 14th Amendment to the US Constitution and an Underground Railroad activist.

Right: Democrat James Buchanan (1791-1868) served one term as the fifteenth President of the United States. His home, Wheatland, stands just beyond the western edge of the city.

Editor’s want-list for this marker. A wide shot showing the marker in its surroundings. • Can you help?
Share this page.