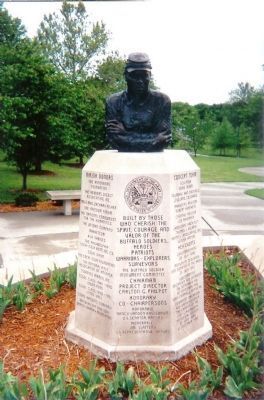 Built by those who cherish the spirit, courage and valor of the Buffalo Soldiers Heroes Patriots Warriors - Explorers Surveyors

Topics and series. This monument and memorial is listed in these topic lists: African Americans • Exploration • Heroes • Military. In addition, it is included in the Buffalo Soldiers series list. 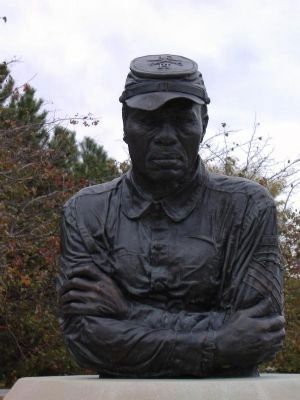 More about this monument. The remaining panels on the marker list the artists and contributors, donors, and organizers who helped present the monument.

Also see . . .
1. SIRIS Database Entry for Monument. The Smithsonian database attributes only Eddie Dixon as the artist. (Submitted on March 24, 2009.)

2. Wikipedia entry for Fort Leavenworth. (Submitted on December 26, 2007, by Mike Stroud of Bluffton, South Carolina.)
3. The Philippine War - A Conflict of Conscience for African Americans. "In February of 1899 Filipino nationalists (Insurectos) led by Emilio Aguinaldo resisted the idea of American domination and began attacking U.S. troops, including the all-Black 24th and 25th Infantry regiments. The 9th and 10th Cavalries were soon sent to the Philippines as reinforcements, bringing all four of the Regular Army's Black regiments into the war. Joining them in fierce combat action early in 1900 were the newly formed 48th and 49th U.S. Volunteer Infantry Regiments (Colored) whose ranks included the largest contingent of Black commissioned officers yet seen in the American armed forced, some 69 men, all of whom were distinguished veterans of the recent war with Spain." (Submitted on March 25, 2009, by Richard E. Miller of Oxon Hill, Maryland.) 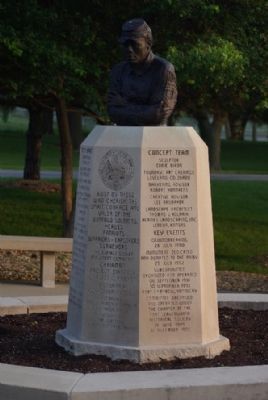 May 26, 2007
3. Old Soldier Marker
sectionheadg>1. Fort Leavenworth
Oldest military base in the United States west of the Mississippi

The function of Ft. Leavenworth was to protect wagon trains and to maintain peace among the Indians. River steamers brought people, animals and equipment to "open the frontier" for development. The fort became a major jumping off point for settlers embarking on both the Santa Fe Trail and Oregon Trail leading westward across the prairie.

For 30 years, Fort Leavenworth was the chief base of operations on the Indian frontier. In 1839, Col. S. W. Kearney marched against the Cherokees with 10 companies of dragoons, the largest U.S. mounted force ever assembled. Throughout the war with Mexico, Fort Leavenworth was the outfitting post for the Army of the West. In 1866, the U.S. Congress authorized the formation of four black regiments - the 24th and 25th Infantry Regiments and the 9th and 10th Cavalry Regiments. The 10th Cavalry Regiment was formed at Fort Leavenworth under the command of Col. Benjamin H. Grierson.

Today, this monument stands at Fort Leavenworth in tribute to the Buffalo Soldiers of the 9th and 10th Cavalry Regiments.
— Submitted December 26, 2007, by Mike Stroud of Bluffton, South Carolina.
2. Kiowa termed them the "Buffalo Soldiers." 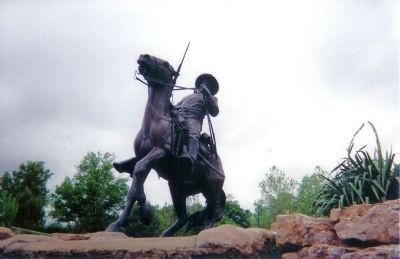 Photographed By Michael Stroud, circa May 1997
4. The Buffalo Soldiers Monument, Sculptured by Eddie Dixon
Bronze sculpture of a U.S. 10th Cavalryman astride his horse is approximately 16 feet high and six feet wide.
Colonel Benjamin Grierson formed the 10th Cavalry on 21 September 1866 at Fort Leavenworth, Kansas. It, along with the 9th Cavalry, 24th and 25th Infantry, formed the first all-black regiments in the Regular United States Army. In western Kansas, the Kiowa encountered the soldiers of the 10th as valiant opponents and termed them the "Buffalo Soldiers." In time, the term designated all of the black soldiers in all four regiments. The Buffalo Solders left Fort Leavenworth to win repeated honors on the plains and in the west. In 1898 the Buffalo Soldiers fought in Cuba winning praise from Theodore Roosevelt and his Rough Riders for their critical role in the battle for Santiago. The Buffalo Soldiers also served on the Mexican border before the American entry into the First World War.

On 1 July 1909, the Army formed the Command and General Staff School Support Detachment, Colored. On 12 October 1931, these troops became the 10th Cavalry (minus the 2nd Squadron and the Machine Gun section). From 1931 to 1940, the 1st Squadron of the 10th Cavalry served at Fort Leavenworth, Kansas. The major function they performed in the peacetime years of the first half of the twentieth century was as essential support troops for the Command and General Staff College.
— Submitted December 26, 2007, by Mike Stroud of Bluffton, South 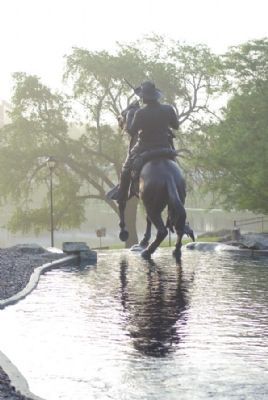 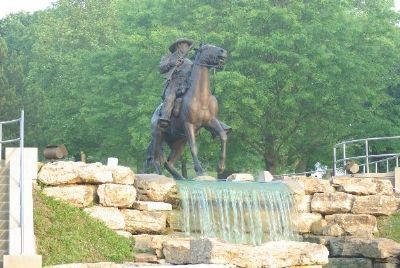 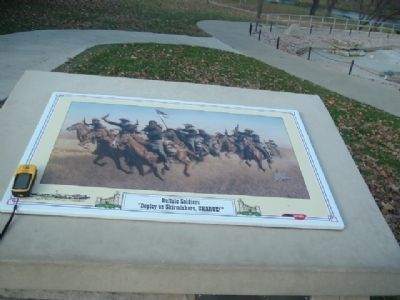 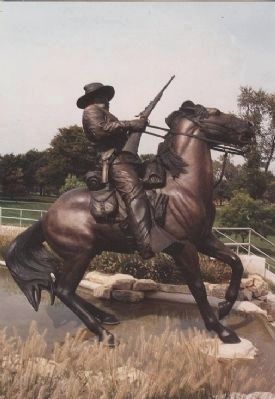 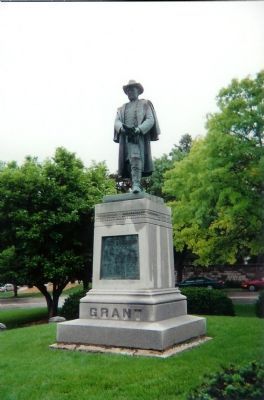