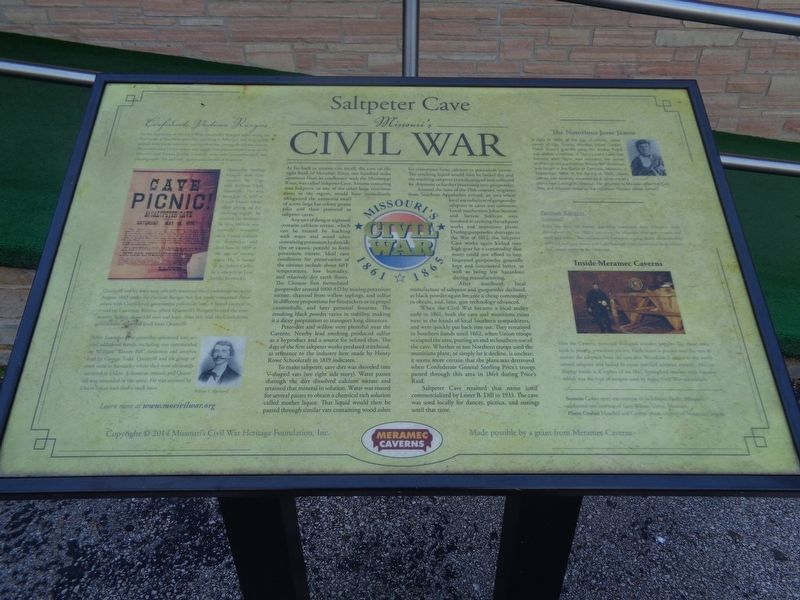 As far back as anyone can recall, the cave on the right bank of Meramec River, one hundred miles upstream from its confluence with the Mississippi River, was called Saltpeter Cave. Anyone venturing into Saltpeter, or any of the other large riverfront caves in the region, would have immediately recognized the ammonia smell of active large bat colony guano piles and their potential as saltpeter caves.

Any sort of dung or nightsoil contains calcium nitrate, which can be treated by leaching with water and wood ashes containing potassium hydroxide (lye or caustic potash) to form potassium nitrate. Ideal cave conditions for preservation of the nitrates include about 60 F temperatures, low humidity, and relatively dry earth floors. The Chinese first formulated gunpowder around 1000 AD by mixing potassium nitrate, charcoal from willow saplings, and sulfur in different proportions for firecrackers or to propel cannonballs, and later personal firearms. The resulting black powder varies in stability, making it a dicey proposition to transport long distances.

Peter-dirt and willow were plentiful near the Caverns. Nearby lead smelting 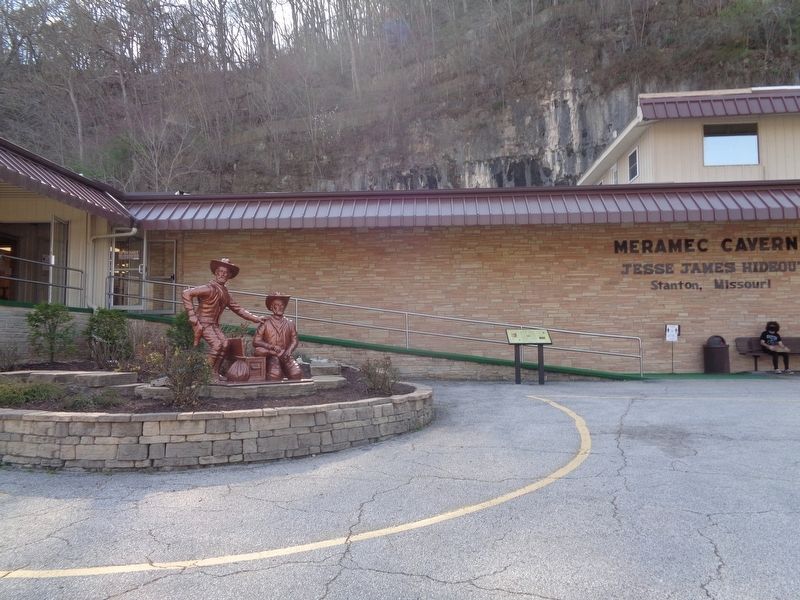 Photographed By Jason Voigt, April 4, 2021
2. Saltpeter Cave Marker
Marker is near the entrance of Meramec Caverns.

Click or scan to see
this page online
producing sulfur as a byproduct and a source for refined shot. The date of the first saltpeter works predated statehood, as reference to the industry here made by Henry Rowe Schoolcraft in 1819 indicates.

To make saltpeter, cave dirt was shoveled into V-shaped vats (see right side story). Water passes through the dirt dissolved calcium nitrate and retained that mineral in solution. Water was reused for several passes to obtain a chemical rich solution called mother liquor. That liquid would then be passed through similar vats containing wood ashes for conversion from calcium to potassium nitrate. The resulting liquid would then be boiled dry and the resulting saltpeter crystals scraped and collected for shipment or further processing into gunpowder.

Around the turn of the 19th century, migrants from Southern Appalachia arrived, an area where local manufacture of gunpowder saltpeter in caves was common. Local southerners John Stanton and Steven Sullivan were involved in reviving the saltpeter works and munitions plants. During gunpowder shortages in the War of 1812, the Saltpeter Cave works again kicked into high gear for a commodity that many could not afford to buy. Imported gunpowder generally kept and functioned better, as well as being less hazardous during manufacturing.

When the Civil War became a local reality early in 1861, both the cave and munitions ruins were in the hands of local Southern sympathizers, and were quickly put back into use. They remained in Southern hands until 1862, when Union troops occupied the area, putting an end to Southern use of the cave. Whether or not Northern troops used the munitions plant, or simply let it decline, is unclear; it seems more certain that the plant was destroyed when Confederate General Sterling Price's troops passed through this area in 1864 during Price's Raid.

Saltpeter Cave retained that name until commercialized by Lester B. Dill in 1933. The cave was locally for dances, picnics, and outings until that time.

At the beginning of the Civil War, Quantrill's Rangers were among the first bands of Southern guerrillas operating in Missouri, and they rapidly gained widespread notoriety and instilled fear among the Union citizens. They ambushed Union troops and supply lines and attacked towns on the Missouri and Kansas border. Guerrilla units were unconventional, employing rapid "hit and run" tactics and the use of disguises.

Quantrill's Partisan Rangers were commanded by Captain William Clark Quantrill. He was born July 31, 1837 at Canal Dover, Ohio. After giving up his teaching career, he entered the military. In May 1865 he was mortally wounded in a Union ambush in Kentucky, and died June 6, 1865 at the age of twenty-seven. He is buried at St. John's Catholic Cemetery in Louisville, Kentucky.

Quantrill and his force were officially mustered into Confederate service in August 1862 under the Partisan Ranger Act, but rarely concerned themselves with Confederate government policies or laws. A brutal example is a raid on Lawrence, Kansas, where Quantrill's Rangers burned the community, killing about 150 men and boys. After this raid, the Confederate government distanced itself from Quantrill.

After Lawrence, the guerrillas splintered into several additional bands, including one commanded by William "Bloody Bill" Anderson and another lead by George Todd. Quantrill and his group of men went to Kentucky where they were ultimately cornered in a barn. A shootout ensued, and Quantrill was wounded in the spine. He was arrested by Union forces and died a week later.

After the war, the former guerrillas continued their Missouri raids throughout the late 1860's, harrassing the Missouri State government and local authorities. The outlaws were known as a gang under the leadership of Frank and Jesse James and Cole Younger, who committed bank robbery and caused terror in the Midwest.

In April of 1864, at the age of sixteen, Jesse James of Clay County, Missouri, joined Captain Fletch Taylor's guerrilla gang. His brother Frank was already a member of Taylor's band. Later that summer, after Taylor was wounded, the James brothers joined a unit led by "Bloody Bill" Anderson, and fought in the Battle of Centralia, Missouri, in September, 1864. In the Spring of 1865, Jesse James was severely wounded by a Union cavalry patrol near Lexington, Missouri. He returned to Missouri after the Civil War, and is known today as the notorious "Outlaw Jesse James."

Visit the Caverns' recreated V-shaped wooden hoppers like those once used to process potassium nitrate. Fresh water is poured into the vats to extract the saltpeter from the cave dirt. Wood ash is added to the newly mixed saltpeter and boiled to create purified saltpeter crystals. Also on display inside is a replica of an 1861 Springfield musket with bayonet which was the type of weapon used by many Civil War-era soldiers.

Topics and series. This historical marker is listed in these topic lists: Animals • War, US Civil. In addition, it is included in the Jesse James, and the Missouri’s Civil War series lists. A significant historical month for this entry is April 1864.

Location. 38° 14.476′ N, 91° 5.525′ W. Marker is near Stanton, Missouri, in Franklin County. Marker can be reached from Highway West (State Highway W), on the right. Marker is at the entrance of Meramec Caverns. Touch for map. Marker is at or near this postal address: 1135 Hwy W, Sullivan MO 63080, United States of America. Touch for directions.