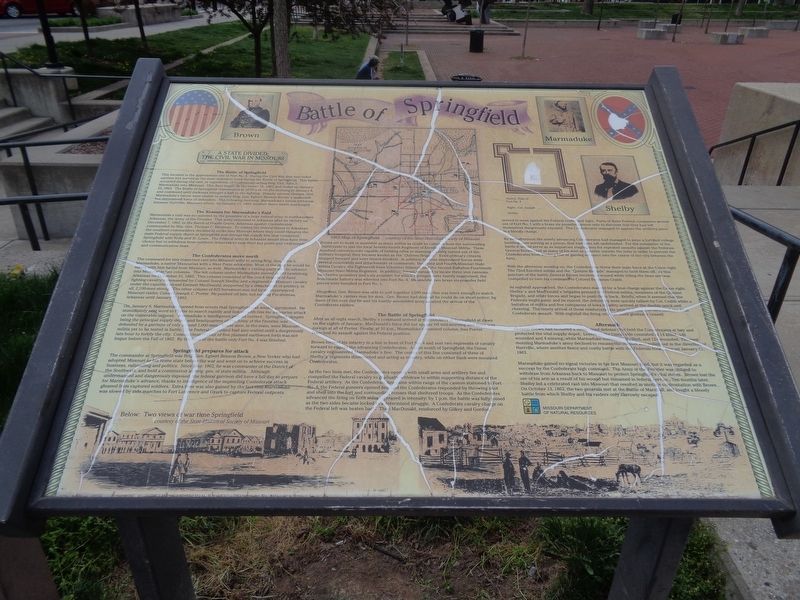 The Battle of Springfield
This location is the approximate site of Fort No. 4. During the Civil War, this four-sided earthen fort served as the main defensive work during the Battle of Springfield. This battle occurred during the raid, or expedition, of Confederate acting Brig. Gen. John S. Marmaduke into Missouri. This Raid began on December 31, 1862 and ended on January 25, 1863. The Battle of Springfield commenced at 10:00 a.m. on the morning of January 8, and continued until darkness brought a halt to the fighting. Despite several charges, Gen. Marmaduke's forces were unable to reduce Brig. Gen. Egbert Benson Brown's makeshift but determined force of defenders. The following morning, Marmaduke's forces withdrew towards Hartville, Missouri where, on January 11, 1863, another fierce battle was fought.

The Reasons for Marmaduke's Raid
Marmaduke's raid was occasioned by the presence of a large federal army in northwestern Arkansas, the Army of the Frontier. This army remained in Arkansas after its victory on December 7, 1862, in the Battle of Prairie Grove, Arkansas against Confederates commanded by Maj. 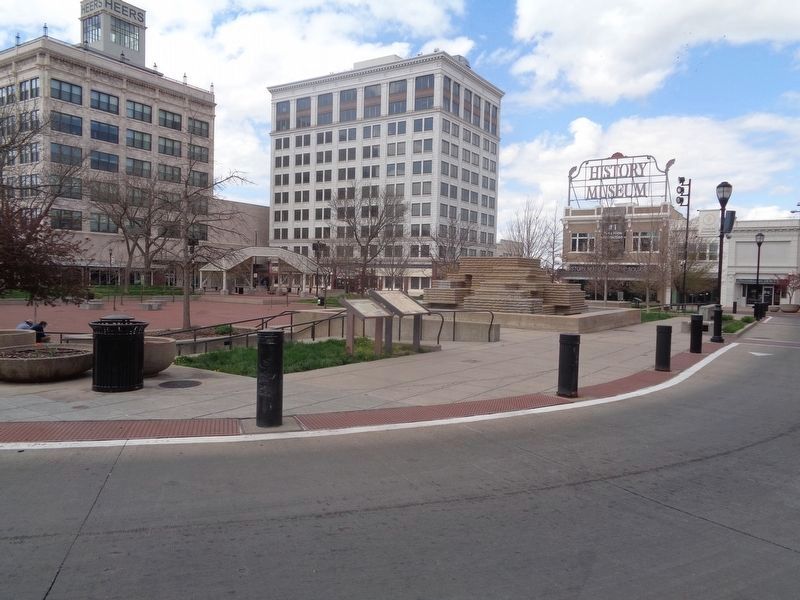 Photographed By Jason Voigt, April 5, 2021
2. Battle of Springfield Marker
Marker is the right of two markers at the southeast corner of Park Central Square

Click or scan to see
this page online
Gen. Thomas C. Hindman. To relieve the federal threat in Arkansas, the southern commanders decided to strike into Missouri where they could threaten the main Federal supply depot at Springfield and disrupt the supply line that connected Springfield with Rolla and St. Louis. The Federal army in Arkansas would then have little choice but to withdraw from northern Arkansas to save their key posts and vital supply and communication lines.

The Confederates move north
The command for this important raid into Missouri went to acting Brig. Gen. John S. Marmaduke, a native Missourian with a West Point education. Most of the men he would be taking with him hailed from Missouri, as well. Marmaduke's raiding party was to advance into Missouri in two columns. The left column consisted of the crack brigade of hard fighting cavalry, commanded by Colonel Joseph Shelby, and a regiment of Missouri cavalry under the capable Colonel Emmett MacDonald, supported by a detachment of artillery, in all, 2,100-men strong. The other column of 825 horsemen was led by an experienced Missouri raider, Colonel Joseph C. Porter. He pushed off late; not leaving Pocahontas, Arkansas until January 2, 1863.

On January 6, Marmaduke learned from scouts that Springfield was weakly garrisoned. He immediately sent word to Porter to march rapidly and link up with him for a surprise attack on the vulnerable outpost. Marmaduke's intelligence proved correct. Springfield, despite being the principal supply depot and headquarters of the Army of the Frontier, was defended by a garrison of only around 1,000 men. These men, in the main, were Missouri militia yet to be tested in battle. The Federal command had also waited until a dangerously late hour to fortify the city. Construction of four of five planned earthwork forts was not begun before the Fall of 1862. By the time of the battle only Fort No. 4 was finished.

Springfield prepares for attack
The commander at Springfield was Brig. Gen. Egbert Benson Brown, a New Yorker who had adopted Missouri as his home state before the war and went on to achieve success in business, railroading and politics. Since May, 1862, he was commander of the District of the Southwest, and held a commission as brig. Gen. of state militia. Although undermanned and dangerously exposed the federal garrison did have a full day to prepare for Marmaduke's advance, thanks to intelligence of the impending Confederate attack gleaned from captured soldiers. Extra time was also gained by the fact that Marmaduke was slowed by side marches to Fort Lawrence and Ozark to capture Federal outposts.

Brown set to work to assemble as many militia as could be called in from the surrounding countryside to join the local Seventy-fourth Regiment of Enrolled Missouri Militia. Three hundred convalescents capable of holding rifles or manning artillery turned out of the military hospital; they became known as the "Quinine Brigade." Even ordinary citizens stepped forward and were issued muskets. In addition to these improvised forces were several commands and detachments of commands: the Third and Fourth Missouri State Militia Cavalry, the Eighteenth Iowa Volunteer Infantry, and the Second Battalion Fourteenth Missouri State Militia Regiment. In addition, Brown managed to locate three iron cannons, two twelve pounders and a six pounder, for which carriages were hastily improvised; the homemade battery was wheeled into Fort No. 4. Meanwhile two brass six-pounder field pieces were installed in Fort No. 1.

Altogether, Gen. Brown was able to pull together 2,099 men; this was force enough to match Marmaduke's raiders man for man. Gen. Brown had done all he could do on short notice; by dawn of the next day he and his hastily assembled army awaited the arrival of the Confederate raiders.

The Battle of Springfield
After an all night march, Shelby's command arrived at the outskirts of Springfield at dawn on the eighth of January; MacDonald's force did not appear till mid-morning and there was no sign at all of Porter. Finally, at 10 a.m., Marmaduke's reunited column, less Porter, launched its assault against the Federal position.

Brown formed his infantry in a line in front of Fort No. 4 and sent two regiments of cavalry forward to engage the advancing Confederates. A mile south of Springfield, the Union cavalry encountered Marmaduke's line. The center of this line consisted of three of Shelby's regiments dismounted and acting as infantry, while on either flank were mounted Confederates.

As the two lines met, the Confederates opened with small arms and artillery fire and compelled the Federal cavalry to gradually withdraw to within supporting distance of the Federal artillery. As the Confederate line came within range of the cannon stationed in Fort No. 4, the Federal gunners opened fire and the Confederates responded by throwing shot and shell into the fort and surrounding houses that sheltered troops. As the Confederates advanced the firing on both sides increased in intensity; by 1 p.m. the battle was fully joined as the two sides became locked in a determined struggle. A Confederate cavalry charge on the Federal left was beaten back. Then MacDonald, reinforced by Gilkey and Gordon, moved in mass against the Federal center and right. Parts of three Federal companies moved out of Fort No. 1 with a brass six-pounder cannon only to discover that they had left themselves dangerously exposed. The Confederates managed to capture the artillery piece in a bloody charge.

By mid-afternoon the slowly advancing Confederates had managed to seize a fortified college building, now serving as a prison, that had been left undefended. For the remainder of the battle it would serve as an important staging area for repeated assaults against the Federals. General Brown kept as many of his men as possible outside the forts in order to prevent the Confederates from flanking him or gaining entrance into the center of the city between the forts.

With the afternoon wearing on, the Confederates threw their main force at the Union right. The 72nd Enrolled militia and the "Quinine Brigade" managed to hold them off. At this juncture of the battle, General Brown received a wound while riding the lines and was compelled to turn his command to Colonel Benjamin Crabb.

As nightfall approached, the Confederates massed for a final charge against the Union right. Shelby's and MacDonald's brigades pressed the Federal militia, members of the Quinine Brigade, and other forces and began to push them back. Briefly, when it seemed that the Federals might panic and be routed, the defenders were quickly rallied by Col. Crabb while battalion of militia and five companies of Iowa infantry arrived at the double quick and cheering. The timely arrival of these reinforcements proved enough to turn back the final Confederate assault. With nightfall the firing on both sides gradually ceased.

Aftermath
General Brown had mounted a determined defense that held the Confederates at bay and protected the vital supply depot. Losses to the Union side consisted of 14 killed, 146 wounded and 4 missing, while Marmaduke sustained 20 killed, and 124 wounded. The next morning Marmaduke's army declined to resume the conflict and pulled out in the direction of Hartville, where another fierce and costly battle with the Federals took place on January 11, 1863.

Marmaduke gained no signal victories in his first Missouri Raid, but it was regarded as a success by the Confederate high command. The Army of the Frontier was obliged to withdraw from Arkansas back to Missouri to protect Springfield's vital stores. Brown lost the use of his arm as a result of his wound but remained in federal service. Ten months later, Shelby led a celebrated raid into Missouri that resulted in another confrontation with Brown. On October 13, 1863, the two generals met at the Battle of Marshall, and fought a bloody battle from which Shelby and his raiders only narrowly escaped.

Topics and series. This historical marker is listed in these topic lists: Forts and Castles • War, US Civil. In addition, it is included in the Missouri - A State Divided: The Civil War in Missouri series list. A significant historical date for this entry is January 25, 1863.