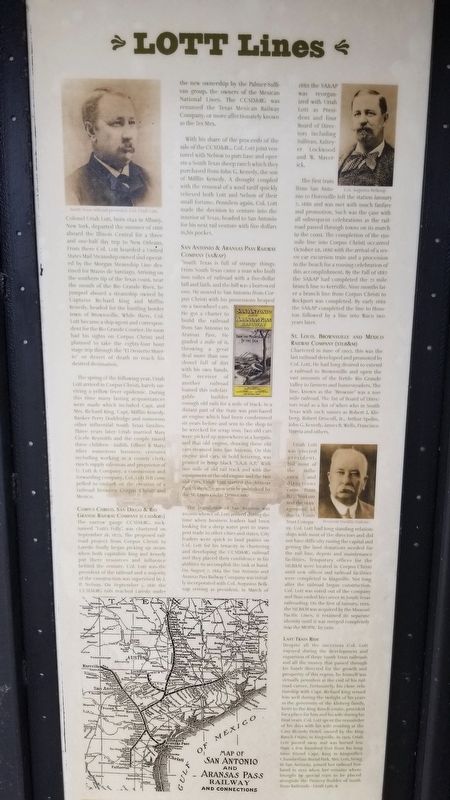 Colonel Uriah Lott, born 1842 in Albany, New York, departed the summer of 1866 aboard the Illinois Central for a three and one-half day trip to New Orleans. From there Col. Lott boarded a United States Mail Steamship owned and operated by the Morgan Steamship Line destined for Brazos de Santiago. Arriving on the southern tip of the Texas coast, near the mouth of the Rio Grande River, he jumped aboard a steamship owned by Captains Richard King and Mifflin Kenedy, headed for the bustling border town of Brownsville. While there, Col. Lott became a ship agent and correspondent for the Rio Grande Courier. He soon had his sights on Corpus Christi and planned to take the eighty-four hour stage trip through the "El Desierto Muerto" or desert of death to reach his desired destination. 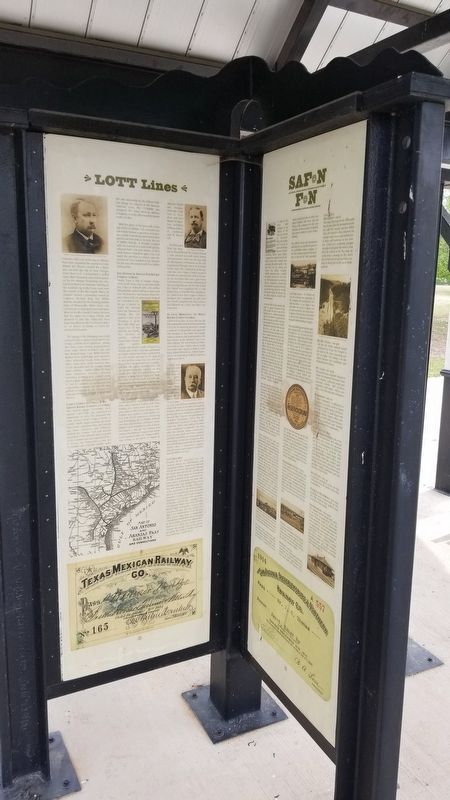 Photographed By James Hulse, April 26, 2021
2. The Lott Lines Marker is the marker on the left of the two markers

Click or scan to see
this page online
Reynolds and the couple raised three children Judith, Edbert & Mary. After numerous business ventures including working as a county clerk, ranch supply salesman and proprietor of U. Lott & Company, a commission and forwarding company, Col. Lott felt compelled to embark on the creation of a railroad between Corpus Christi and Mexico.

CORPUS CHRISTI, SAN DIEGO & RIO GRANDE RAILWAY COMPANY (CCSD&RG)
The narrow gauge CCSD&RG, nicknamed "Lott's Folly", was chartered on September 18, 1875. The proposed rail road project from Corpus Christi to Laredo finally began picking up steam when both capitalists King and Kenedy put there resources and influence behind the venture. Col. Lott was the president of the railroad and a majority of the construction was supervised by J.P. Nelson. On September 1, 1881 the CCSD&RG rails reached Laredo under the new ownership by the Palmer-Sullivan group, the owners of the Mexican National Lines. The CCSD&RG was renamed the Texas Mexican Railway Company, or more affectionately known as the Tex Mex.

With his share of the proceeds of the sale of the CCSD&RG, Col. Lott joint ventured with Nelson to purchase and operate a South Texas sheep ranch which they purchased from John G. Kenedy, the son of Mifflin Kenedy. A drought coupled with the removal of a wool tariff quickly relieved both Lott and Nelson of their small fortune. 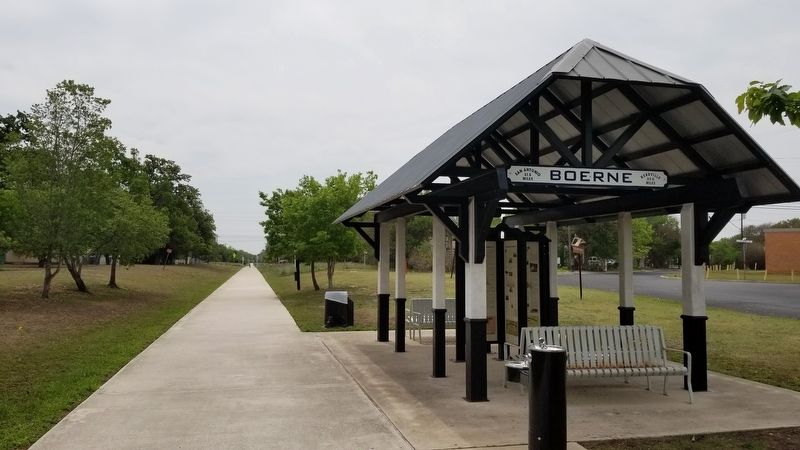 Photographed By James Hulse, April 26, 2021
3. Lott Lines Marker
Penniless again, Col. Lott made the decision to venture into the interior of Texas, headed to San Antonio for his next rail venture with five dollars in his pocket.

SAN ANTONIO & ARANSAS PASS RAILWAY COMPANY (SA&AP)
"South Texas is full of strange things. From South Texas came a man who built 600 miles of railroad with a five-dollar bill and faith, and the bill was a borrowed one. He moved to San Antonio from Corpus Christi with his possessions heaped on a two-wheel cart. He got a charter to build the railroad from San Antonio to Aransas Pass. He graded a mile of it, throwing a great deal more than one shovel full of dirt with his own hands. The receiver of another railroad loaned this indefatigable builder enough old rails for a mile of track. In a distant part of the State was purchased an engine which had been condemned six years before and sent to the shop to be wrecked for scrap iron. Two old cars were picked up somewhere at a bargain, and that old engine, drawing these old cars steamed into San Antonio. On this engine and cars, in bold lettering, was printed in lamp black "S.A.& A.P." With one mile of old rail track and with the equipment of the old engine and the two old cars, Uriah Lott started the Aransas Pass System."- 1901 article published by the St. Louis Globe Democrat.

The population of San Antonio was 20,000 when Col. Lott 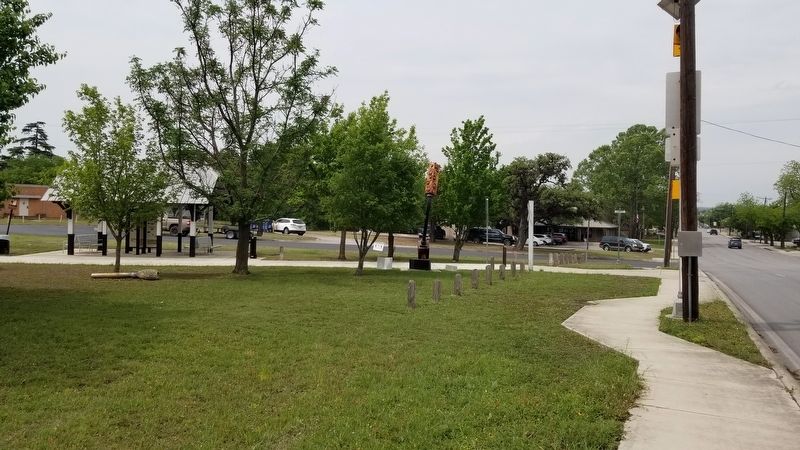 Photographed By James Hulse, April 26, 2021
4. The view of the Lott Lines Marker from the road
arrived during the time when business leaders had been looking for a deep water port to transport trade to other cities and states. City leaders were quick to laud praises on Col. Lott for his tenacity in chartering and developing the CCSD&RG railroad and they placed their confidence in his abilities to accomplish the task at hand. On August 7, 1884 the San Antonio and Aransas Pass Railway Company was initially incorporated with Col. Augustus Belknap serving as president. In March of 1885 the SA&AP was reorganized with Uriah Lott as President and four Board of Directors including Sullivan, Kalteyer Lockwood and W. Maverick.

The first train from San Antonio to Floresville left the station January 7, 1886 and was met with much fanfare and promotion. Such was the case with all subsequent celebrations as the rail road passed through towns on its march to the coast. The completion of the 150 mile line into Corpus Christi occurred October 28, 1886 with the arrival of a seven car excursion train and a procession to the beach for a rousing celebration of this accomplishment. By the Fall of 1887 the SA&AP had completed the 71 mile branch line to Kerrville. Nine months later a branch line from Corpus Christi to Rockport was completed. By early 1889 the SA&AP completed the line to Houston followed by a line into Waco two years later. 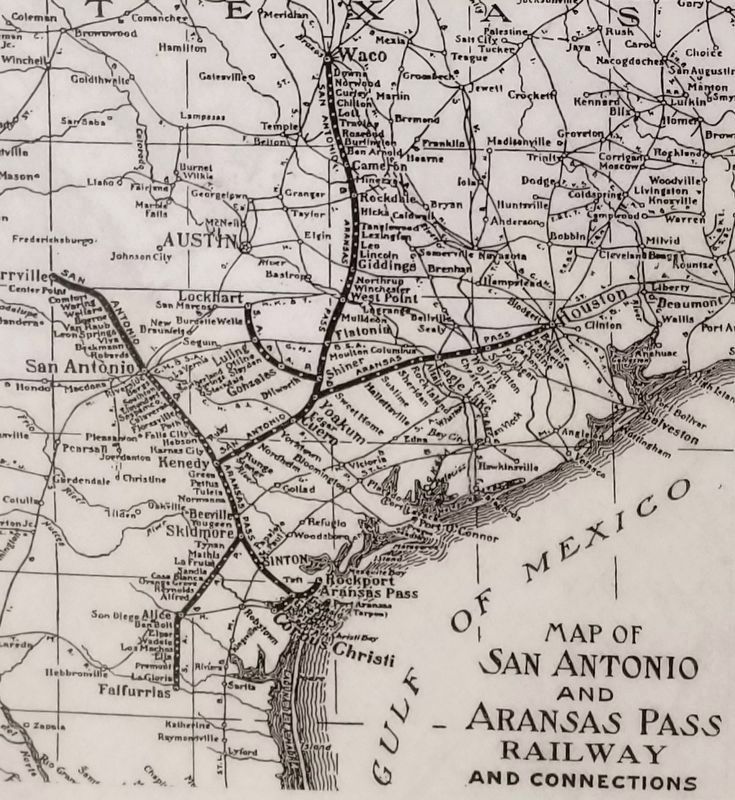 Photographed By James Hulse, April 26, 2021
5. Map of San Antonio and Aransas Pass Railway and Connections
RAILWAY COMPANY (STLB&M)
Chartered in June of 1903, this was the last railroad developed and promoted by Col. Lott. He had long desired to extend a railroad to Brownsville and open the vast amounts of the fertile Rio Grande Valley to farmers and homesteaders. The line, known as the "Brownie" was a 200 mile railroad. The list of Board of Directors read as a list of who's who in South Texas with such names as Robert J. Kleberg, Robert Driscoll, Jr., Arthur Spohn, John G. Kenedy, James B. Wells, Francisco Yturria and others.

Uriah Lott was elected president, but most of the influence and directions came from B.F. Yoakum and the management of the St. Louis Trust Company. Col. Lott had long standing relationships with most of the directors and did not have difficulty raising the capital and getting the land donations needed for the rail line, depots and maintenance facilities. Temporary offices for the STLB&M were located in Corpus Christi until new offices and railroad facilities were completed in Kingsville. Not long after the railroad began construction, Col. Lott was voted out of the company and thus ended his career in South Texas railroading. On the first of January, 1925, the STLB&M was acquired by the Missouri Pacific Lines, it retained its separate identity until it was merged completely into the MOPAC by 1956.

LAST TRAIN RIDE
Despite all the successes Col. Lott enjoyed during the development and expansion of three South Texas railroads and all the money that passed through his hands directed for the growth and prosperity of this region, he himself was virtually penniless at the end of his railroad career. Fortunately, his close relationship with Capt. Richard King served him well during the twilight of his years as the generosity of the Kleberg family, heirs to the King Ranch estate, provided for a place for him and his wife during his final years. Col. Lott spent the remainder of his days with his wife residing at the Casa Ricardo Hotel, owned by the King Ranch Estate, in Kingsville. In 1915, Uriah Lott passed away and was buried less than a few hundred feet from his long time friend Capt. King in Kingsville's Chamberlain Burial Park. Mrs. Lott, living in San Antonio, joined her railroad husband in 1952 when her remains where brought by special train to be placed alongside the Pioneer Builder of South Texas Railroads - Uriah Lott.

Topics. This historical marker is listed in these topic lists: Parks & Recreational Areas • Railroads & Streetcars. A significant historical date for this entry is September 18, 1875.