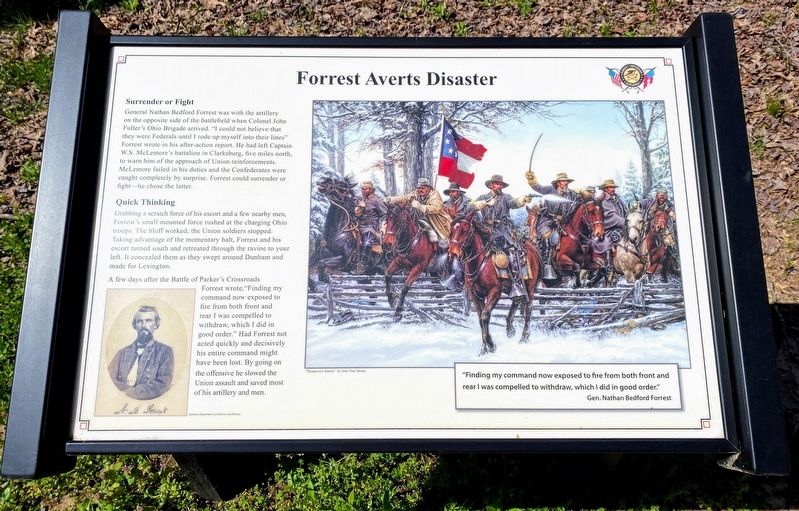 "Finding my command now exposed to fire from both front and rear I was compelled to withdraw, which I did in good order."
Gen. Nathan Bedford Forrest

Surrender or Fight
General Nathan Bedford Forrest was with the artillery on the opposite side of the battlefield when Colonel John Fuller's Ohio Brigade arrived. "I could not believe that they were Federals until I rode up myself into their lines" Forrest wrote in his after-action report. He had left Captain W.S. McLemore's battalion in Clarksburg, five miles north, to warn him of the approach of Union reinforcements. McLemore failed in his duties and the Confederates were caught completely by surprise. Forrest could surrender or fight—he chose the latter.

Quick Thinking
Grabbing a scratch force of his escort and a few nearby men, Forrest's small mounted force rushed at the charging Ohio troops. The bluff worked; the Union soldiers stopped. Taking advantage of the momentary half, Forrest and his escort turned south and retreated through the ravine to your left. It concealed them as they swept around Dunham and made for Lexington.

Click or scan to see
this page online
few days after the Battle of Parker's Crossroads Forrest wrote, "Finding my command now exposed to fire from both front and rear I was compelled to withdraw, which I did in good order." Had Forrest not acted quickly and decisively his entire command might have been lost. BY going on the offensive he slowed the Union assault and saved most of his artillery and men.

Location. 35° 47.04′ N, 88° 23.171′ W. Marker is in Parkers Crossroads, Tennessee, in Henderson County. Marker is on Federal Lane 0.2 miles east of Tennessee Route 22, on the right when traveling east. Marker is located along the South Battlefield Trail, at Auto Tour Stop No. 7 of the Parker's Crossroads Battlefield Auto Tour. Touch for map. Marker is in this post office area: Wildersville TN 38388, United States of America. Touch for directions.