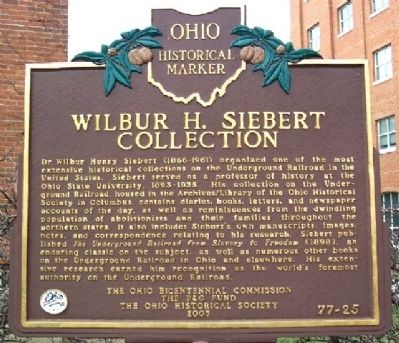 Photographed By William Fischer, Jr., March 15, 2009
1. Wilbur H. Siebert Collection Marker
Inscription.
Wilbur H. Siebert Collection. . Dr. Wilbur Henry Siebert (1866-1961) organized one of the most extensive historical collections on the Underground Railroad in the United States. Siebert served as a professor of history at the Ohio State University, 1893-1935. His collection on the Underground Railroad, housed in the Archives/Library of the Ohio Historical Society in Columbus, contains diaries, books, letters, and newspaper accounts of the day, as well as reminiscences from the dwindling population of abolitionists and their families throughout the northern states. It also includes Siebert's own manuscripts, images, notes, and correspondence relating to his research. Siebert published The Underground Railroad from Slavery to Freedom (1898), an enduring classic on the subject, as well as numerous other books on the Underground Railroad in Ohio and elsewhere. His extensive research earned him recognition as the world's foremost authority on the Underground Railroad. . This historical marker was erected in 2003 by Ohio Bicentennial Commission, The P and G Fund, and The Ohio Historical Society. It is in Columbus in Franklin County Ohio 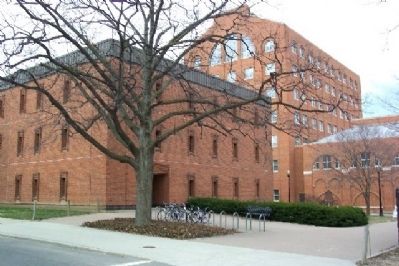 Click or scan to see
this page online
is listed in these topic lists: Abolition & Underground RR • Arts, Letters, Music • Education. In addition, it is included in the Ohio Historical Society / The Ohio History Connection series list.

Location. 40° 0.069′ N, 83° 0.843′ W. Marker is in Columbus, Ohio, in Franklin County. Marker is on 17th Avenue, on the left when traveling east. Marker is in the courtyard between Dulles Hall and Brown Hall on The Ohio State University Campus. Touch for map. Marker is at or near this postal address: 230 W 17th Avenue, Columbus OH 43210, United States of America. Touch for directions.