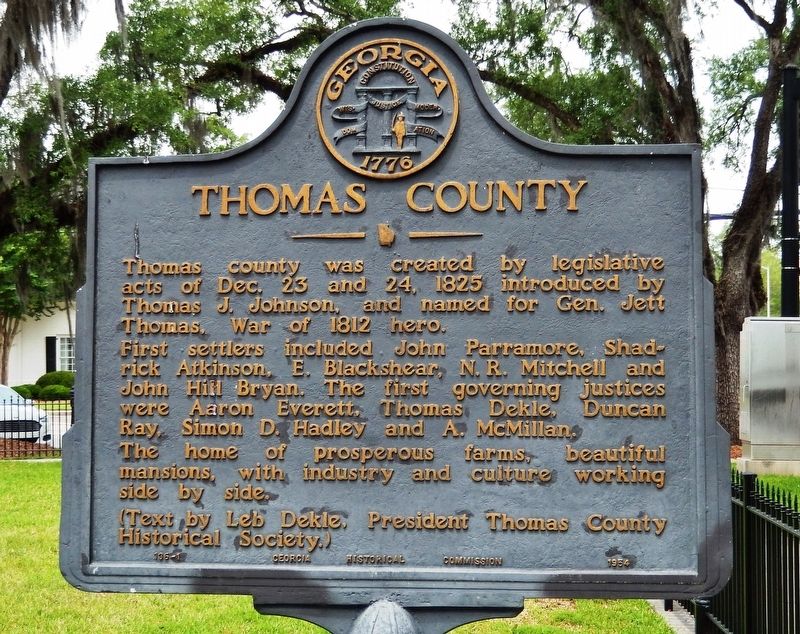 Photographed By Cosmos Mariner, May 2, 2021
1. Thomas County Marker
Inscription.
Thomas county was created by legislative acts of Dec. 23 and 24, 1825 introduced by Thomas J. Johnson, and named for Gen. Jett Thomas, War of 18 12 hero.

The home of prosperous farms, beautiful mansions, with industry and culture working side by side.

The home of prosperous farms, beautiful mansions, with industry and culture working side by side.

Topics and series. This historical marker is listed in these topic lists: Settlements & Settlers • War of 1812. In addition, it is included in the Georgia Historical Society series list. A significant historical date for this entry is December 23, 1825.

Location. 30° 50.337′ N, 83° 58.908′ W. Marker is in Thomasville, Georgia, in Thomas County. Marker is on North Broad Street just south of West Washington Street, on the right when traveling south. Marker is 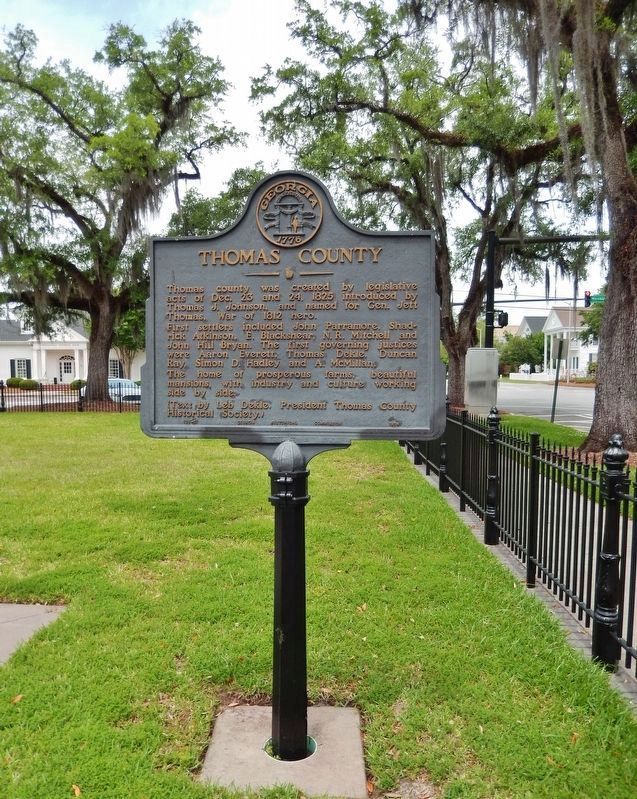 Click or scan to see
this page online
located on the grounds of the former (historic) Thomas County Courthouse, near the Broad Street entrance. Touch for map. Marker is at or near this postal address: 225 North Broad Street, Thomasville GA 31792, United States of America. Touch for directions.

Also see . . .
1. Thomas County (Wikipedia). The county is named for Jett Thomas, officer in the War of 1812 who is also known for overseeing the construction of the first building at the University of Georgia (originally referred to as Franklin College and known today as Old College) as well as the old state capitol at Milledgeville. (Submitted on May 31, 2021, by Cosmos Mariner of Cape Canaveral, Florida.)

2. Thomas County. The county has seven municipalities, the largest is Thomasville. Others include Barwick, Boston, Coolidge, Meigs, Ochlocknee, and Pavo. Ochlocknee is named for the river flowing through Thomas 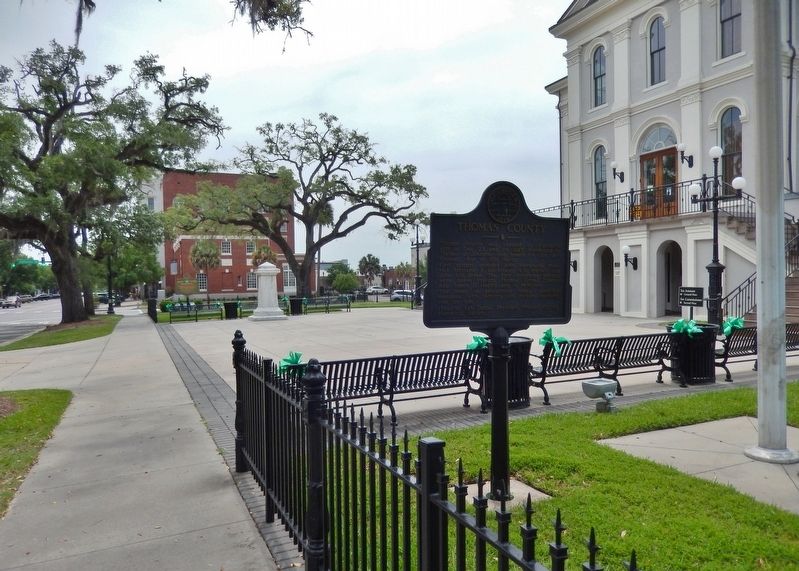 Photographed By Cosmos Mariner, May 2, 2021
3. Thomas County Marker
(looking south • North Broad Street on left)
County. Meigs was named for several Meigs families who came from Marlboro County, South Carolina. Pavo is Latin for Peacock, which was the name of the first postmaster in the area. (Submitted on May 31, 2021, by Cosmos Mariner of Cape Canaveral, Florida.)

3. Thomasville: Our History. Without a railroad until 1861, Thomas County residents became largely self-sufficient. Agriculture was diversified and business methods were modernized. With the advent of the Civil War, Thomasville played an important role in the Confederate cause by supplying goods and men. The war itself touched the county only briefly when Federal prisoners were sent to Thomasville from Andersonville in late 1864. (Submitted on May 31, 2021, by Cosmos Mariner of Cape Canaveral, Florida.) 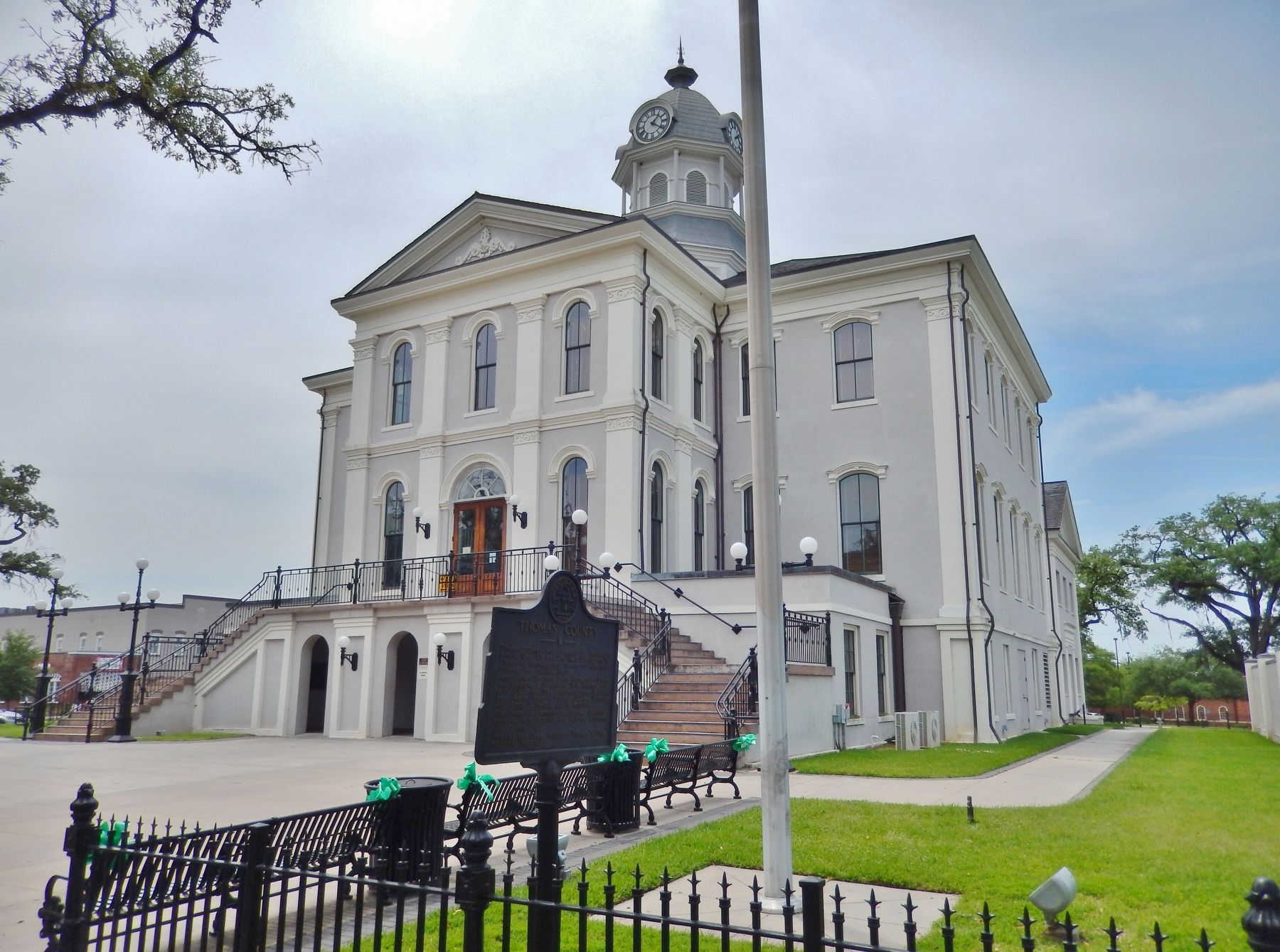