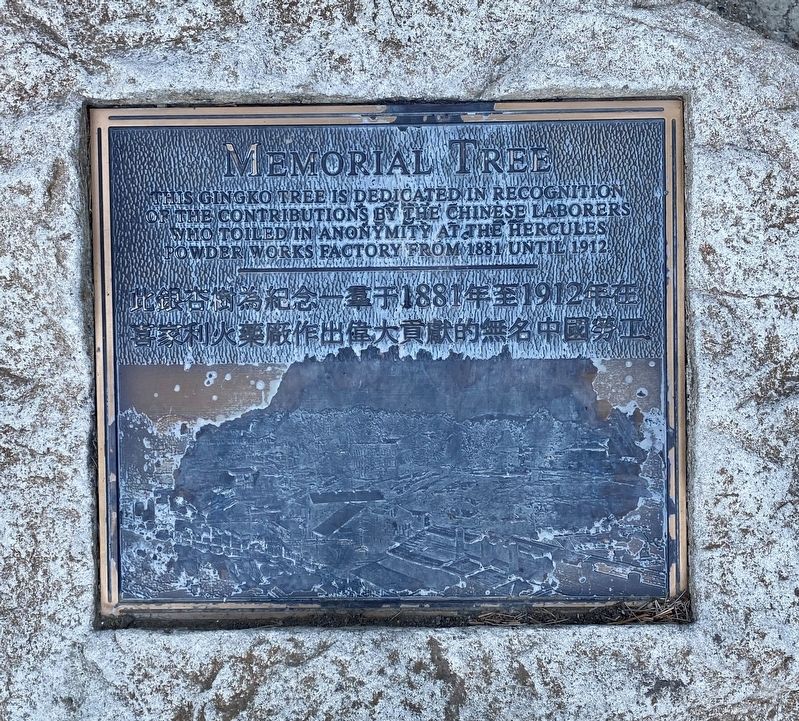 (Chinese text not transcribed) . This memorial was erected in 2008. It is in Hercules in Contra Costa County California

This Gingko tree is dedicated in recognition of the contributions of Chinese laborers who toiled in anonymity at the Hercules Powder Works Factory from 1881 until 1912.

Topics. This historical marker and memorial is listed in these topic lists: Asian Americans • Industry & Commerce.

Location. 38° 1.036′ N, 122° 17.045′ W. Marker is in Hercules, California, in Contra Costa County. Marker can be reached from the intersection of Willet Street and Sycamore Avenue. Touch for map. Marker is at or near this postal address: 1000 Willet Street, Hercules CA 94547, United States of America. Touch for directions. 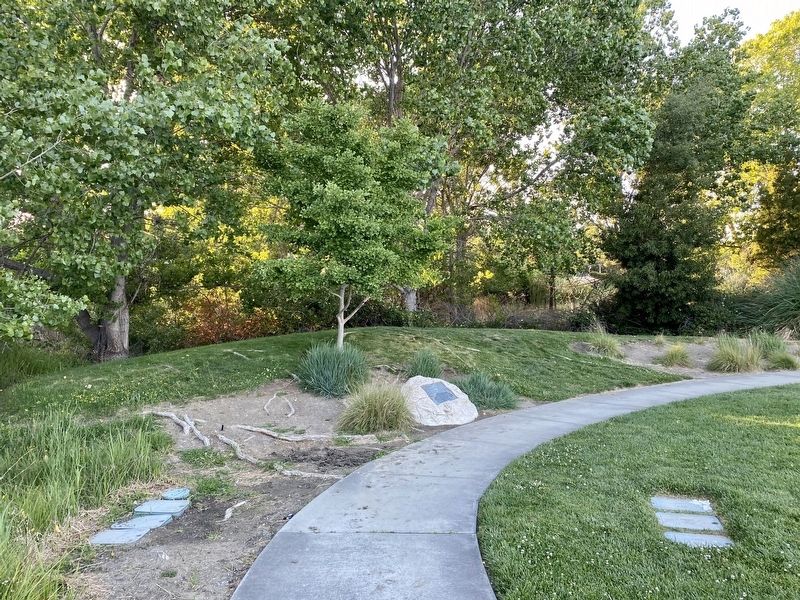 More about this memorial. The marker is mounted to a low boulder towards the "back" of Frog Pad Park.

Also see . . .
1. Hercules Powder and Chinese Labor. Hercules Historical Society website entry:
"The city of Hercules, 13 miles north of the Bay Bridge, became the site of California Powder Works in 1881. Hercules was named after the company’s major product, Hercules Black Powder. The plant was ideally located near the Southern Pacific Railroad and along the San Pablo Bay. The isolated location of the company town was necessary because of the explosive nature of the company’s product. The work in the factory was extremely dangerous and between the plant’s opening in 1882 and the turn of the century, there were at least seven deadly explosions. The most destructive explosion occurred in 1908. The town, in the late nineteenth and early twentieth centuries, employed both white and Chinese workers. Newspaper coverage of each explosion in the late nineteenth and early twentieth centuries often demonstrated the tension between white and Chinese workers. With increasing anti-Chinese sentiment in California and the United States in the 1860s and 1870s, and the passing of the Chinese Exclusion Act in 1882, the company town experienced a demographic shift. At the town’s opening, Chinese workers made up the majority of the plant’s labor force and by 1913 the town no longer employed Chinese workers. Hercules and its explosive dynamite plant employed Chinese workers for the plant’s most dangerous positions, resulting in the death of a disproportionate number of Chinese workers to white workers. The small company town of Hercules felt vibrations from the government’s Chinese Exclusion policies, resulting in differential treatment between white and Chinese workers at the plant as well as differentiating representation in both local and international newspapers, which covered the many explosions at the plant in the late nineteenth and early twentieth centuries." (Submitted on June 2, 2021.)