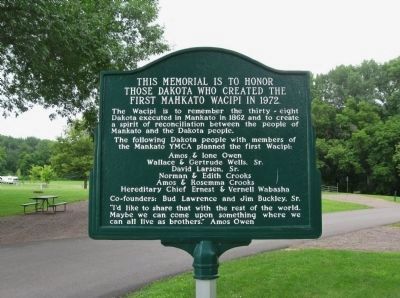 By K. Linzmeier, July 30, 2013
1. The First Mahkato Memorial Wacipi Marker
Inscription.
The First Mahkato Memorial Wacipi. . . This memorial is to honor those Dakota who created the First Mahkato Wacipi in 1972. . . The Wacipi is to remember the thirty-eight Dakota executed in Mankato in 1862 and to create a spirit of reconciliation between the people of Mankato and the Dakota people. . . The following Dakota people with members of the Mankato YMCA planned the first Wacipi: . . Amos & Ione Owen . Wallace & Gertrude Wells, Sr. . David Larsen, Sr. . Norman & Edith Crooks . Amos & Rosemma Crooks . Hereditary Chief Ernest & Vernell Wabasha. . . Co-founders: Bud Lawrence and Jim Buckley, Sr. . . “I’d like to share that with the rest of the world. Maybe we can come upon something where we can all live as brothers.” , Amos Owen . This historical marker was erected in 2008. It is in Mankato in Blue Earth County Minnesota

This memorial is to honor those Dakota who created the First Mahkato Wacipi in 1972.

The Wacipi is to remember the thirty-eight Dakota executed in Mankato in 1862 and to create a spirit of reconciliation between the people of Mankato and the Dakota people.

The following Dakota people with members of the Mankato YMCA planned the first Wacipi:

“I’d like to share that with the rest of the world. Maybe we can come upon something where we can all live as brothers.” —Amos Owen 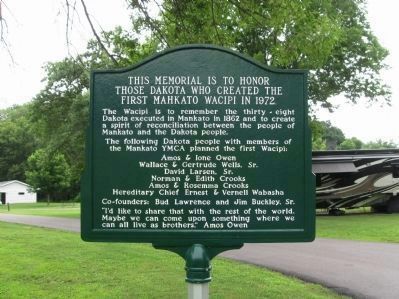 Regarding The First Mahkato Memorial Wacipi. Land of Memories park is located south of Mankato, Minnesota. on West Sibley Park Rd. off of Hwy 169. This land has been designated by the Blue Earth County officials as a permanent land area for the annual Mdewakanton Dakota Memorial Wacipi (Pow Wow) in memory of the 38 Dakota warriors who were executed on December 26, 1862 in the largest mass execution in US history in Mankato.

Beginning in 1972, every September, Native Americans from a number of tribes gather in Mankatos Land of Memories Park, where the Dakota people held many ceremonies and gatherings before the 1862 U.S./Dakota warriors who were executed in Mankato in 1862. The traditional memorial Pow-Wow, has been held in Mankato since 1972. 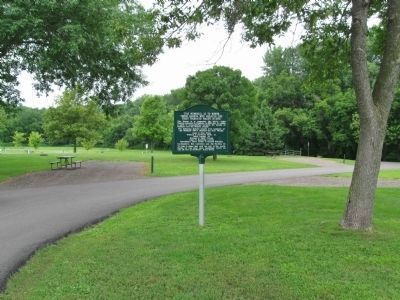 Also see . . .
1. The Dakota Conflict Remembered. Unpublished paper by Sheryl L. Dowlin, Ph.D., and Bruce Dowlin, B.A., prepared for the 35th Annual Northern Great Plains History Conference September 28-30, 2000, Mankato, MN. “Despite concern on the eve of the pow wow that there wouldn’t be any dancers, the pow wow attracted 1,500-2,000 Native Americans, most of them curious about the fact that the city of Mankato was actually hosting such an event! The most dramatic and significant memory of this first pow wow was the sight of bald eagles circling above the baseball field at the time of the Grand Entry, the event preceding the dancing. Some observers said there were 38 eagles. This stunning event solidified the understanding that Mankato events would be in commemoration of the 38 executed Dakota.” (Submitted on December 7, 2008, by J. J. Prats of Powell, Ohio.)

2. Mdewakanton Association Purpose and History. “One of the primary cosponsored and co-organized events has been the Mahkato pow-wow or Wacipi (Wa-CHEE-pee meaning ‘dance’ in Dakota). Having a cultural event like this in Mankato is unique for two reasons. First, there are no reservations near Mankato. Secondly, the creation of this annual Wacipi grew out of a friendship, in the late 1950s, between two men, Mr. Amos 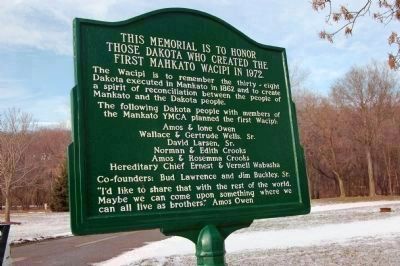 December 2, 2008
4. The First Mahkato Memorial Wacipi Marker
Owen, a Dakota elder, pipe maker and spiritual advisor to many from the Prairie Island Mdewakanton Community (90 miles northeast of Mankato) and Mr. Bud Lawrence, a Mankato non-Dakota businessman. As an outgrowth of this friendship, the first Mankato pow-wow since the 1800s was put on at the YMCA in 1965. Since 1972, an annual three-day traditional Dakota Mahkato Mdewakanton Wacipi has been held the third full weekend in September in Mankato, MN.” (Submitted on December 7, 2008.) 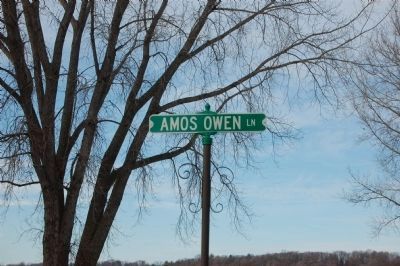 December 2, 2008
5. Road Renamed Amos Owen Lane
The road to the Mahkato Land of Memories Park was named in memory of the late Amos Owen in 2008. 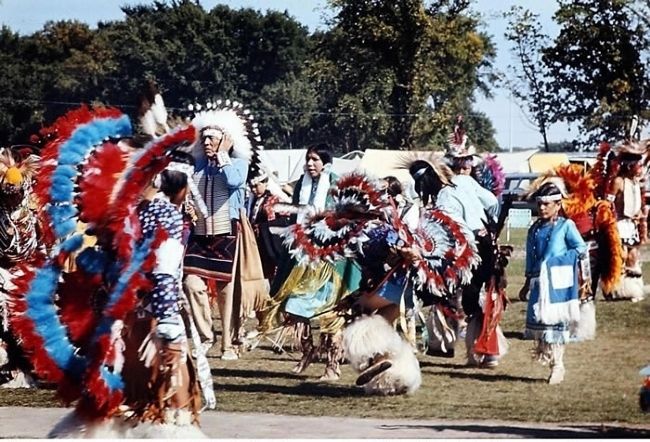 Bud Lawrence Archives
6. At the First Mahkato Memorial Wacipi in 1972
This photo was captioned: “The first powwow in Mankato took place in 1972, when more than 2,000 mostly Dakota Indians gathered for the event. It continues to this day, bringing whites and Indians together in a town that once symbolized division between the two.” 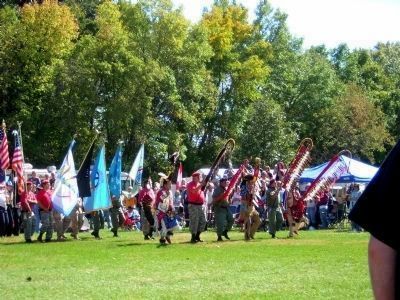 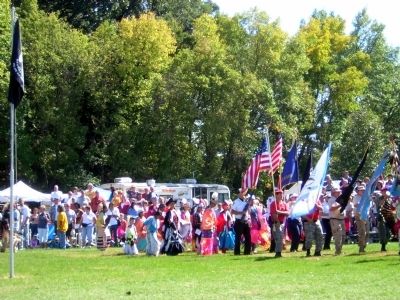 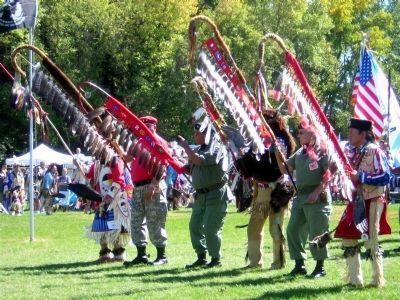 Click on an image for a larger, clearer picture. 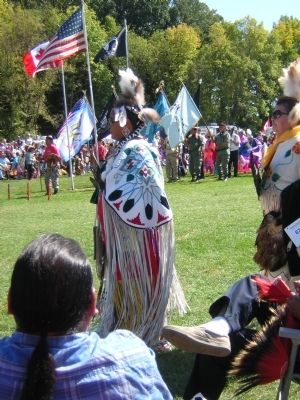 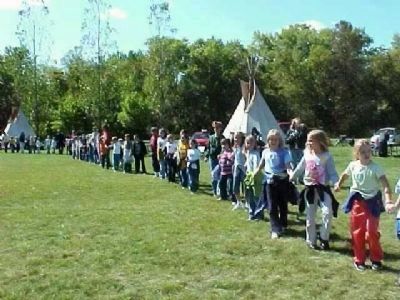 Bud Lawrence Archives
11. Mahkato Education Day Project
The Mahkato Education Day takes place every year on the Friday of the Mdewakanton Mahkato Wacipi. Mankato Public School Third graders, teachers and parents are bused out to the pow wow grounds where they gather in small groups to listen and learn from Dakota and other tribal group members about their traditions, families and crafts. These third graders and their teachers are taking part in a Friendship Dance led by some of the Native American teachers and accompanied by the Maza Kute Singers and Drum Group from Santee Nebraska. The first Mahkato Education Day took place in September 1987, during the Year of Reconciliation in Minnesota between the Dakota and non-Dakota people. This education project has continued every year since its beginning in 1987. 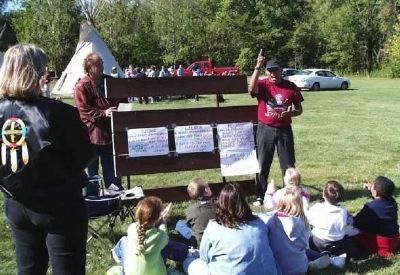 Bud Lawrence Archives
12. The Mahkato Education Day
Mr. Barry Blackhawk (Ho-Chunk) teaches the Mankato 3rd graders, teachers and parents about the Ho-Chunk language. This is one of 30 different learning stations staffed by Native American personnel. The project takes places in Land of Memories Park near the pow wow grounds. 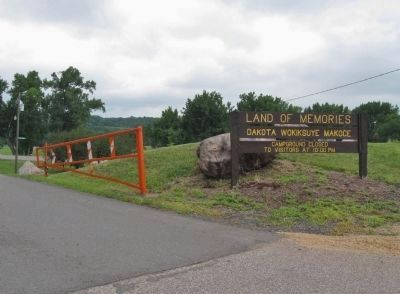