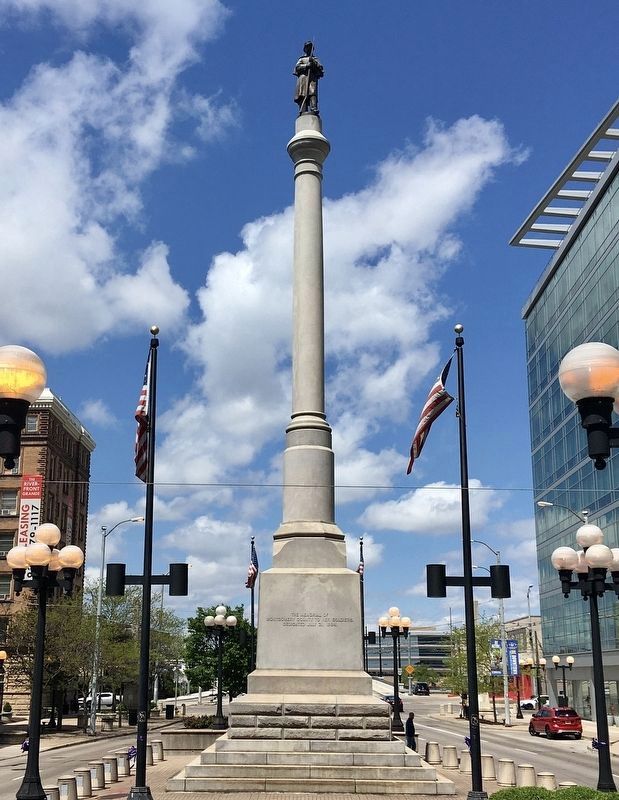 The Memorial of
Montgomery County to her Soldiers.
Dedicated July 31, 1884.

"The Federal Union
Must and Shall be Preserved"

The Republic Rests on the
Virtue, Intelligence and Patriotism
of its Citizens.

"Liberty and Union,
Now and Forever, One and Inseparable"

Erected 1884 by Citizens of Montgomery County. 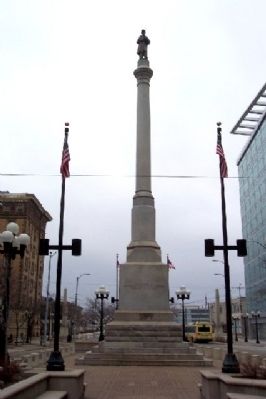 No item of Dayton history is more intriguing than the selection of the Union private soldier who has commanded the vista of Main St., from atop the Soldiers’ Monument since 1884.

An account of the selection in a special historical section of The Daily News in 1923, commemorating the landing at Dayton in 1796, was said to be the first “based on history and narrations of survivors who were active in securing the design.”

As reported in the first installment of this series, a figure representative of the Goddess of Liberty was authorized initially. The Carpenter firm had been awarded the contract and arranged for the marble figure to be purchased in Carrara, Italy.

Photographed By William Fischer, Jr., February 14, 2009
3. Montgomery County Civil War Memorial Dedication
Guard association protested vehemently, however, and passed a resolution requesting commissioners to substitute the Union private soldier. It was contended every memorial to the warrior should be of his likeness or symbolize a deed in battle.

The commission assented, if not too late to make the change.

THE ITALIAN SCULPTOR was notified by cable, the Old Guard paying the $18.75 bill. He responded quickly, asking that the soldier be selected immediately so modeling could begin.

Two commissioners were named to make the choice, who was to be “some broad shouldered, military-looking private soldier who would meet the ideal of the heroic sentinel.”

The quest was unavailing until the name of George Washington Fair, a bricklayer and an ex-Union soldier, was called. The commissioners, C. M. Hassler and Henry Kissinger, hurried to his home on W. Fifth st.

It was only after his wife’s aid was enlisted that Fair consented to pose for a photograph. A quick visit to the governor of the soldiers’ home secured a No. 4 size uniform, the army’s largest issue.

“IT WAS A STEAMING hot day when Mr. Fair, wearing a heavy soldier’s overcoat, and accoutered

“The picture gallery was like a furnace room on that sweltering day, and the ordeal undergone by the soldier thus clad in heavy clothing as if for mountain picket duty in mid-winter was almost as trying as facing death on the battlefield

“Like the good soldier he was, however, he faithfully performed the task. Mr. Fair was a modest and unassuming gentleman and wholly indifferent to the notoriety or fame that would forever attach to his name by reason of the event.

“It was without any concern on his part, therefore, but simply to accommodate the committee that he thus posed for a sculpture’s marble subject, which, when finally fashioned into seeming life and placed in its commanding position would be imperishable.

“The sentinel is said to be a perfect likeness of him who thus typifies the Union private soldier.”

GEORGE W. FAIR was a native Daytonian and the youngest of 13 children. There were eight boys. Three of the six sons in Union service were casualties.

The parents were Charles and Elizabeth Fair. The father was born in England of French descent. He emigrated to America and settled near Patasco Falls, Md. The mother, whose maiden name was Elizabeth Marr,

Foundation of the monument, built of Dayton stone, was completed Nov. 22, 1883. The granite was quarried at Hallowell, Me. The first four carloads arrived in Dayton April 19, 1884, the remainder late in May.

The granite blocks were hauled by traction engines from the depot to the monument site.

“The stones, it is claimed, that entered into the construction of the monument, are the largest in the world,” an old report declares.

The stones were hoisted into position by two derricks, one towering 100 feet.

On the east die is written: “The republic rests upon the virtue, intelligence and patriotism of its citizens.”

On the west die; “Liberty and union, one and inseparable, now and forever.”

The shaft reaches 85 feet to the base of the sentinel.

Photographed By William Fischer, Jr., February 14, 2009
6. Montgomery County Civil War Memorial
The statue was completed and shipped two weeks earlier than the contract time. In the event it had not left Italy until the specified date it would have been shipped on a vessel which, when it left Leghorn, never again was reported.

The Soldiers’ Monument had survived the first threat to its existence. Others would follow.
— Submitted March 1, 2015, by J. Makali Bruton of Querétaro, Mexico. 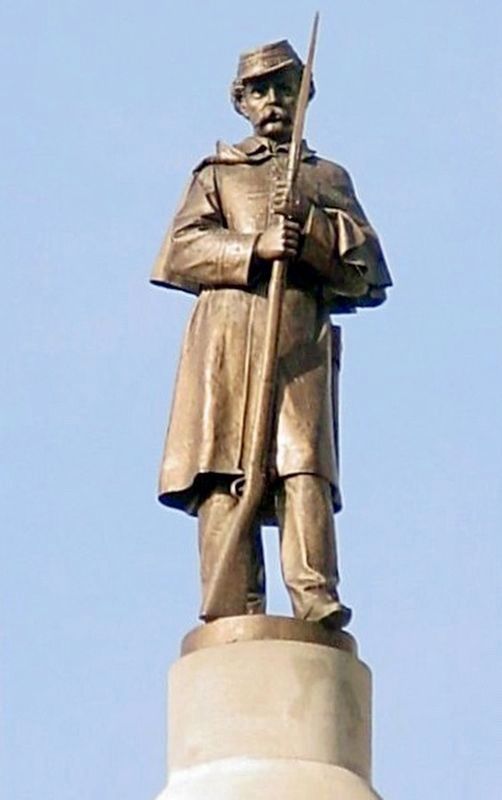