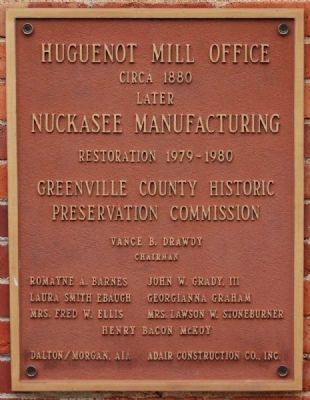 Topics. This historical marker is listed in these topic lists: Industry & Commerce • Notable Buildings. A significant historical year for this entry is 1880.

Other nearby markers. At least 10 other markers are within walking distance of this marker. Carolina Supply Company (about 400 feet away, measured in a direct line); Buck Mickel (about 500 feet away); The Geologic History of Greenville 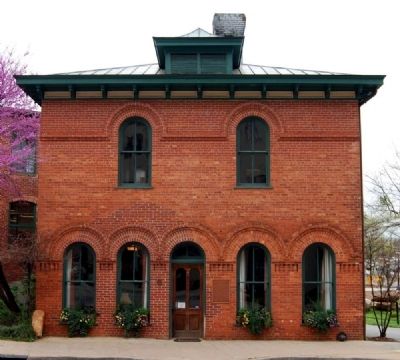 Also see . . .  Reedy River Industrial Historic District. The Reedy River Industrial Complex is the only area in downtown Greenville which has maintained its historic and architectural character as a nineteenth and early twentieth century industrial and commercial district. (Submitted on April 2, 2009, by Brian Scott of Anderson, South Carolina.)

Additional commentary.
1. Huguenot Mill
The speed with which "mill fever" resulted in the formation of a cotton mill is exemplified by the Huguenot Mill, built in 1882. According to the Baltimore Journal of Commerce and Manufacturing Record, "the company that erected the Huguenot 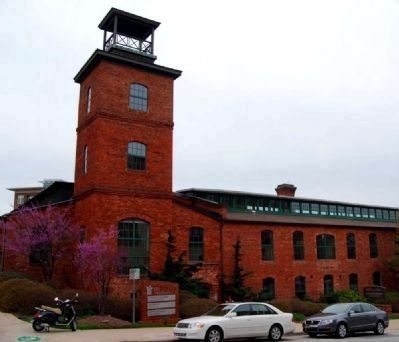 Photographed By Brian Scott, March 22, 2009
3. Huguenot Mill
Mill at Greenville formed February 10, 1881; a charter was obtained March 13; a lot bought in the heart of the city and the first brick laid March 23, the last June 2; by July 22 the machinery was in place and the mill weaving cloth."

The Huguenot Mill was also an example of advanced planning and design. Organized by Charles E. Graham and Charles H. Lanneau, the company had a capital of $150,000. Lanneau, the superintendent, was a self-taught miller who had been treasurer of the Reedy River Mill at Conestee. The Huguenot Mill, a two-story brick building incorporating the latest fireproof techniques, was located on the Reedy River adjacent to the carriage factory. But its two hundred looms, built by Wood of Philadelphia, were not driven by waterpower but by an eighty horsepower engine. The mill manufactured plaids, cottonades, and gingham -- the only such mill in South Carolina. It originally employed 120 operatives. By 1893 the mill had 2,750 spindles and employed 175 people. (Source: Greenville: The History of the City and County in the South Carolina Piedmont by Archie Vernon Huff (1995) pg 189.)
— Submitted March 27, 2010, by Brian Scott of Anderson, South Carolina.
2. Huguenot Mill
There was in operation the Huguenot Mills, located on Broad street in this 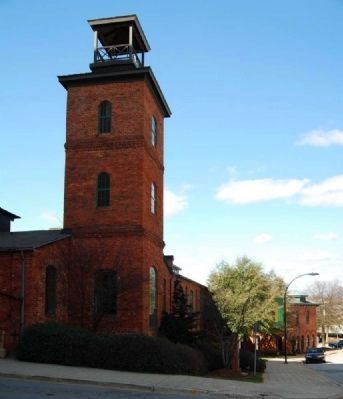 Photographed By Brian Scott, February 28, 2010
4. Huguenot Mill Tower
city. This plant is owned by the Messrs. Graham, of Greenville and has a nominal capital of $75,000, though the investment represents a considerably larger sum. They manufacture colored goods, such as ginghams and plaids, and employ from 225 to 250 hands. Prior to 1894 there was one other mill known as the Lanneau Manufacturing Company, located just outside of the incorporate limits of the city, but this mill was destroyed by fire and was
never replaced.

In 1895 subscriptions to the capital stock of the F.W. Poe Manufacturing Company were made and this incorporation was organized with a capital of $250,000 for the purpose of building a 10,000 spindle
mill. Within two years 5,000 additional spindles were added, and at this time the mill has 60,000 spindles in round numbers and a capital. of $500,000. The 60,000 spindles, however, represent an investment of nearly $1,000,000, and it is necessary for the operation of the large plant to employ from 900 to 1,000 people, making up a village of 2,500 people just beyond the incorporate limits of Greenville. (Source: The Greenville Century Book (1903), pg. 59.)
— Submitted March 27, 2010, by Brian Scott of Anderson, South Carolina.
3. Reedy River Industrial Historic District
Located directly on the reedy River 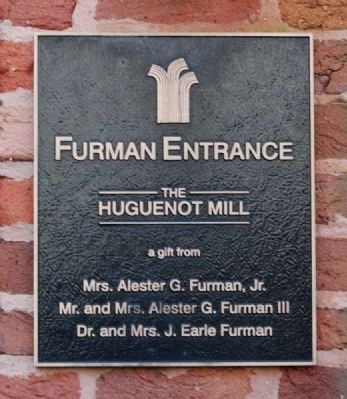 1. The Greenville Coach Factory Blacksmith Shop 46' by 99' (Markley Alley).Constructed circa 1850 as a blacksmith shop for the Greenville Coach Factory, this building is one of the oldest structures in downtown Greenville. It is a three and one-half story shed-roofed building constructed with handmade brick and hand hewn wooden framing members. The 9/9 windows have crude wooden lintels. No nails were used in its construction. An elevator or a "hoisting shaft" rises through the three floors of the building. Early rope-operated iron gears, axles and pulleys are still attached to the ceiling inside of the shaft. This building is currently used as a warehouse for a department 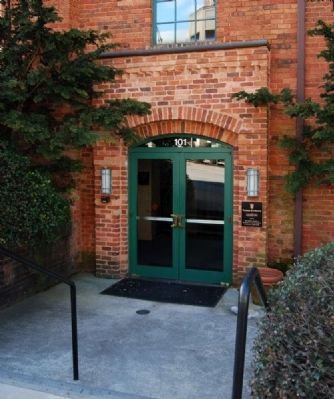 2. The Markley Carriage Factory Pain Shop 48' by 135' (Reedy River just west of the South Main Street Bridge). Built prior to 1915 as part of Markley Carriage Factory and hardware complex, the Paint Shop is a two-story brick structure with large windows of the same size on each story. The near flat roof has a cupola at its center. This cupola may have been removed from an older building at the Greenville Coach Factory when it was torn down to make room for the Paint Shop. The building's interior was altered in 1922 to accommodate the Duke's Products Company, a mayonnaise factory later bought by the C.F. Sauer Company. The building has been vacant since 1958.

3. The Markley Hardware Store 53' by 130' (422 South Main Street). This two-story commercial structure with ground level basement at the rear was built between 1905 and 1914 as a retail hardware store for the Markley Carriage Factory. It replaced the smaller hardware store and office of the Greenville Coach Factory. Unusual exterior features include "pressed brick" in difference muted colors in a pattern on the facade and leaded glass panels at the spandrel above the first level. The interior has a decorative pressed tin ceiling and frieze. The building is presently vacant. 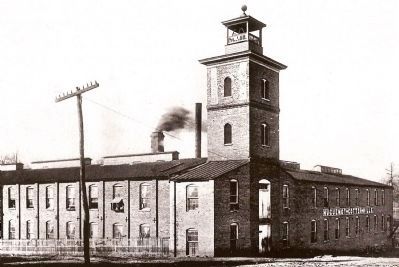 Coxe Collection, Greenville County Historical Society, circa 1905
7. Huguenot Cotton Mill
brick cotton mill constructed in 1882. Its features include a water, ventilating and stair tower on the north corner, and the monitored roofs and general features of "Fireproof Construction" common to the New England mills of the same period. The mill has been altered several times to accommodate the expanding industrial needs of the Huguenot Mill and later the Nuckasee Manufacturing Company. Several outbuildings of the Huguenot Mill were removed about 1913 and the windows were bricked up about 1960.

5. The Huguenot Mill Office (Broad Street at River Street Bridge). This small two-story brick office was built between 1890 and 1900 in a modified Italianate design. Exterior features of the office include round arched projecting hood moldings around the doors and windows, and ornate modillions with pendants at the cornice. There is a louvered dormer on the north slope of the pyramidal hipped tin roof. The interior features include tongue and groove paneling at the dado, an unusually wooden mantle featuring spiraled spindles and pendants and a cast iron sink with a shell design at its base on the second floor.

6. The Cotton Warehouse (South Main and West Camperdown Way). 110' by 86' by 40' by 162' (corner of South Main and Camperdown Way). The Cotton Warehouse was constructed between 1908 and 1913 as a warehouse for the Huguenot Mill. This unusual three-story, five sided building with a ground level basement at the rear is constructed of reinforced concrete and brick. The arched windows on the front facade have been filled with block, glass and brick. The building is presently occupied by a garment manufacturer on the first floor. The upper floors are vacant.

In 1978, the area of the Reedy River Industrial Complex was the subject of a survey and planning grant, funded by the Department of interior and administered by the South Carolina Department of Archives and History. The Greenville Museum Commission, recipient of the grant, has conducted a survey of the area and developed a feasibility study for the creation of a regional textile museum complex to be located in the restored structures of the Reedy River Industrial Complex. This museum complex will be an educational and commercial facility designed to tell the history of the American Textile Industry and to display current textile operations and future innovations.

Significance
The Reedy River Industrial Complex is significant as the only area in downtown Greenville, South Carolina which has maintained its historic and architectural character as a 19th and early 20th Century industrial and commercial district. Featuring six industrial or commercial structures constructed between 1850 and 1914, the Reedy River Industrial Complex represents Greenville's transition from a 19th Century summer resort and agricultural village into a leading international textile center.

The Reedy River Industrial Complex is located directly on the Reedy River, the geographical and historical center of the City of Greenville. The power generating capabilities of the Reedy River were indirectly responsible for the founding of Greenville at this site in the early 1800s. During Greenville's formative period, the mills that were the economic life of the city sat on the Reedy River in order to use its power. The original historic core of this area (containing the Reedy River Falls, the Furman University Botanical Gardens and the site of the earliest grist mill) was listed on the National Register of Historic Places on April 23, 1973 as the Reedy River Historic Park and Greenway. This important area reflects the early agricultural and manufacturing history of the city.

As a logical counterpart to this early district, the Reedy River Industrial Complex reflects Greenville's rapid industrial development during the 19th and early 20th centuries. This industrialization was later to give Greenville the slogan "Textile Center of the World."

The Reedy River Industrial Complex is a distinct geographic area which has historically been developed as an interrelated industrial complex. The first development within the district's boundaries began in 1835 when Ebenezer Gower and Thomas Cox established a wagon and carriage factory. Shortly thereafter, Thomas Claghorn Gower, Ebenezer's younger brother, joined the manufactury; in 1853 H.C. Markley also joined the firm and expanded its operations. The firm was then called the Greenville Coach Factory. By 1856, the factory employed 100 men, sold $80,000 worth of vehicles a year and was considered to be the largest carriage factory in the South. Later called Markley's carriage Factory, the company was in continuous operation from 1835 to 1914 when the increased use of the automobile put the factory out of business. During the factory's existence a large industrial complex was constructed on the reedy River. Remaining from this complex are the Blacksmith Shop, Paint Shop, and Hardware Store.

The success of the Huguenot Mill and others built at the turn of the century on the periphery of the city created the need for cotton and cotton waste storage and warehousing operations. The Cotton Warehouse across South Main Street from the coach factory of one of the remaining warehouses in downtown Greenville which served the Huguenot mill for this purpose.