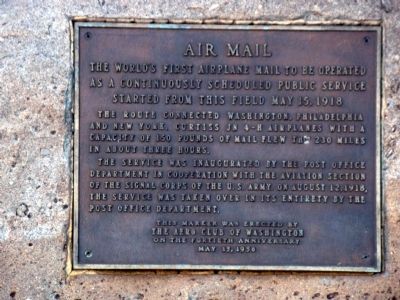 Photographed By J. J. Prats, April 3, 2009
1. Air Mail Marker
Inscription.
Air Mail. . The world's first airplane mail to be operated as a continuously scheduled public service started from this field May 15, 1918. , The route connected Washington, Philadelphia and New York. Curtiss JN 4-H airplanes with a capacity of 150 pounds of mail flew the 230 miles in about three hours. , The service was inaugurated by the Post Office Department in cooperation with the Aviation Section of the Signal Corps of the U. S. Army. On August 12, 1918, the service was taken over in its entirety by the Post Office Department. . This historical marker was erected in 1958 by The Aero Club of Washington on the fortieth anniversary, May 15, 1958. It is in West Potomac Park in Washington District of Columbia

The world's first airplane mail to be operated as a continuously scheduled public service started from this field May 15, 1918.

The route connected Washington, Philadelphia and New York. Curtiss JN 4-H airplanes with a capacity of 150 pounds of mail flew the 230 miles in about three hours.

Topics and series. This historical marker is listed in these topic lists: Air & Space • Communications. In addition, it is included in the Postal Mail and Philately series list. A significant historical date for this entry is May 15, 1764. 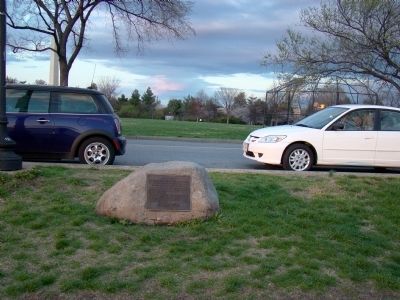 Click or scan to see
this page online
west. Touch for map. Marker is at or near this postal address: 342 Ohio Drive Southwest, Washington DC 20418, United States of America. Touch for directions.

More about this marker. It is between the road and the paved walkway at the river’s edge. It faces the walkway; all you see from the road is the back of the boulder.

Regarding Air Mail. The airfield, now West Potomac Park, was known then as the Washington Polo Grounds. The route was Washington Polo Grounds to Belmont Park in New York City with an intermediary stop at Bustleton Field in Philadelphia. The original Air Mail letter rate was 24 cents per ounce. First class mail then cost 2 cents for the first ounce.

Also see . . .  The Airmail Takes Wing. Condensed from a narrative by C. V. Glines. “A phone call came to [Henry H.] Arnold from [George L.]Boyle about an hour after he had left the Polo Grounds. Lost and nearly out of gas, he had landed in a farmer’s field at Waldorf MD, 20 miles southeast of his takeoff point. The plane had flipped 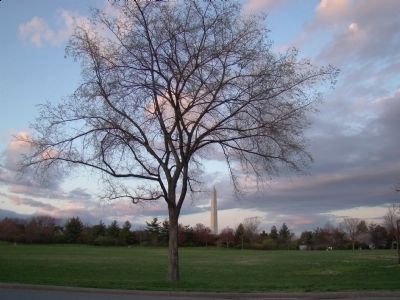 Photographed By J. J. Prats, April 3, 2009
3. Former Airfield, Now West Potomac Park
over on its back and the prop was splintered, but he was unhurt. Instead of following the railroad tracks northward, Boyle had followed a branch line out of the rail yard that took him southeast instead of north—an unreliable compass was no help. He had become not only the first official, scheduled-airmail pilot to depart with mail from Washington but, unhappily, had also become the first airmail pilot to get lost and the first to have an accident. His mail was unceremoniously trucked back to Washington. ” (Submitted on April 3, 2009.)

Polo field was rimmed with trees 30 to 60 feet tall. Within the field stood a covered grandstand and one lone tree. [Reuben H.] Fleet could do nothing about the grandstand, but he ordered the tree, which had already caused one crash, to be removed by May 14. The Park Department replied that it would take three months to receive permission to cut down the offending tree. Fleet then told the local mechanics to chop down the tree six inches below the ground, cover the hole with cinders, stomp hard on it, then drag the tree outside the park.” (Submitted on 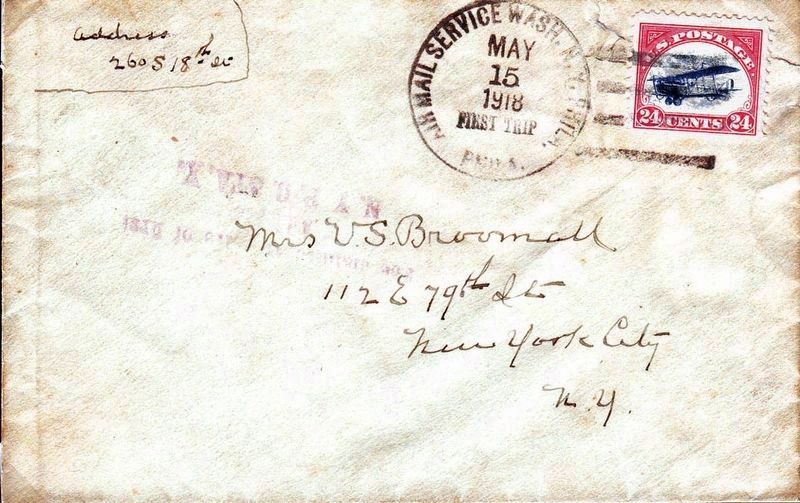 Photographed by Centpacrr, via Wikimedia Commons
4. This Envelope Flew on the First Airmail Flight from Washington
April 3, 2009.) Note To Editor only visible by Contributor and editor
— Submitted September 9, 2016. 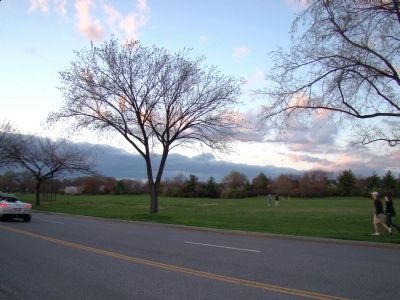