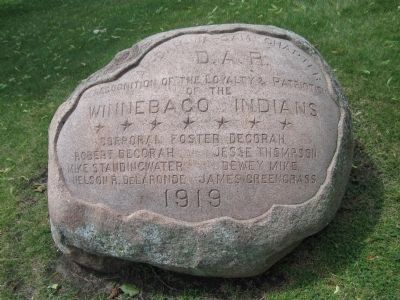 Topics and series. This memorial is listed in these topic lists: Native Americans • Patriots & Patriotism • War, World I. In addition, it is included in the Daughters of the American Revolution (DAR) series list. 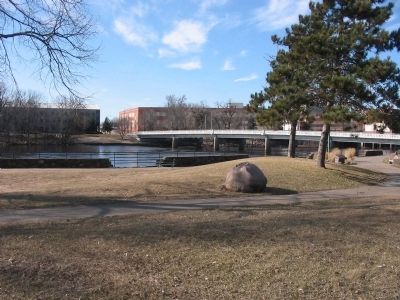 More about this marker. "The monument, provided by the Ahdawagam Chapter of the D. A. R., has been in readiness for some time, awaiting the completion of the improvements now under way on the west bank of the river, just south of the [Grand Avenue] bridge, where it is to be placed [for the July Fourth, 1923 dedication]. It is a large granite boulder inscribed with... seven members of the Winnebago tribe who died in the service of the United States during the war."

Corporal Foster DeCorah and Private Robert DeCorah were Killed in Action on August 1, 1918. (Corporal Foster DeCorah, who was killed in the Argonne while at the head of an advancing party of American soldiers, was far beyond military age, but was allowed to join the army. Three of his sons served in the same command, one being killed at the same time as his father.) Private Jesse Thompson was Killed in Action on October 10, 1918. Mike Standing Water died on the transport ship Leviathan enroute to France (April, 1918). Private Dewey Mike died from wounds on August 30, 1918. Private Nelson DeLaRonde was Missing in Action (September, 1918). James Greengrass was gassed on a battlefield, came home, and later died.

The fine example set by these men is worthy of exceptional praise because they were not even considered full fledged citizens of the United States at the time of their service."

Related marker. Click here for another marker that is related to this marker. Another marker about Winnebago Indians.

Also see . . .  World War II Stories - In Their Own Words: Donald C Boyd. My Father served with the 32nd "Red Arrow" Division, 128th Infantry Regiment, Cannon Company. He fought in the Pacific Theater Leyte, Luzon, and most notably, The Villa Verde Trail where he received the Bronze Star. He is now 82 years old and in good health. A short interview with my Dad may be viewed at this link. (Submitted on April 13, 2009, by Matthew Boyd of Swanton, Ohio.) 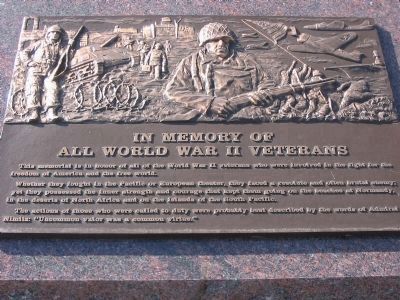 Photographed By Keith L, April 7, 2009
3. Nearby World War II Memorial
In Memory Of All World War II Veterans
This memorial is in honor of all of the World War II veterans who were involved in the fight for the freedom of America and the free world.

Whether they fought in the Pacific or European theater, they faced a resolute and often brutal enemy, yet they possessed the inner strength and courage that kept them giving on the beaches at Normandy, in the deserts of North Africa and on the islands of the South Pacific.

The actions of those who were called to duty were probably best described by the words of Admiral Nimitz: "Uncommon valor was a common virtue." 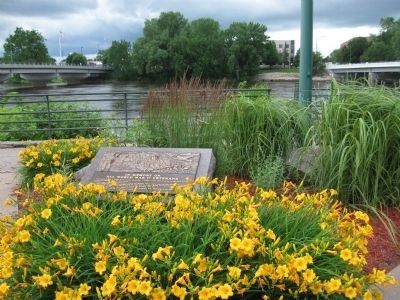