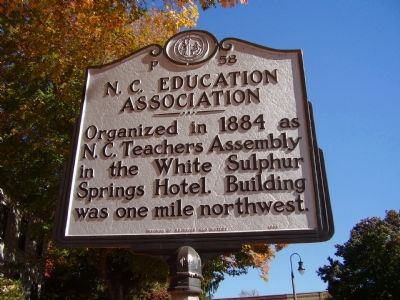 By Stanley and Terrie Howard, October 17, 2008
1. N.C. Education Association Marker
Inscription.
N.C. Education Association. . Organized in 1884 as N.C. Teachers Assembly in the White Sulphur Springs Hotel. Building was one mile northwest. . This historical marker was erected in 1985 by Division or Archives and History. It is in Waynesville in Haywood County North Carolina

Organized in 1884 as N.C. Teachers Assembly in the White Sulphur Springs Hotel. Building was one mile northwest.

Erected 1985 by Division or Archives and History. (Marker Number P-58.)

Topics and series. This historical marker is listed in this topic list: Education. In addition, it is included in the North Carolina Division of Archives and History series list. A significant historical year for this entry is 1884.

Other nearby markers. At least 8 other markers are within 2 miles of this marker, measured as the crow flies. Century Vault (within shouting distance of this marker); Old Time Music (about 600 feet away, measured in a direct line); Battle House (approx. 0.2 miles away); Martin's Surrender (approx. half a mile away); Museum Of N.C. Handicrafts (approx. half a mile away); Thomas's Resting Place (approx. 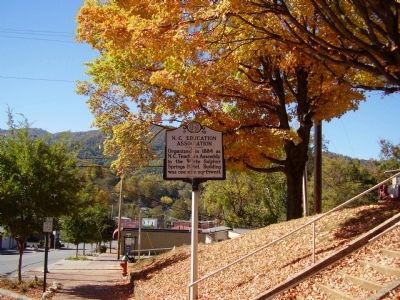