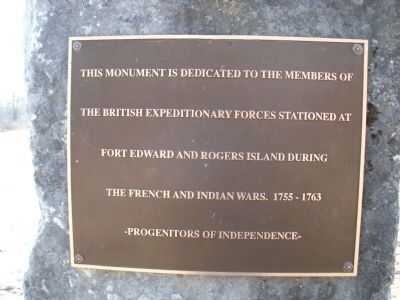 This monument is dedicated to the members of the British expeditionary forces stationed at Fort Edward and Rogers Island during the French and Indian Wars. 1755 - 1763
-Progenitors of Independence-

Topics. This historical marker is listed in this topic list: War, French and Indian. A significant historical year for this entry is 1755.

More about this marker. Directions to the marker from northbound Interstate 87 (Adirondack Northway), take Exit 17 N on to US Route 9, at 1.2 miles by the Hess Gas Station take a right onto State Route 197 (Reynolds Road). Stay on Route 197 until approximately 100 yard pass the first bridge over the Hudson River (you are now on Rogers Island), the drive-way is on the right, this is 4.5 miles from the turn onto Route 197. Turn right and follow the Road pass Rogers Island Visitors' Center parking lot, the road becomes a dirt road and makes a sharp right hand turn under a D&H Rail Road trestle. Continue on the road, the monument is on the right hand side of the road .3 miles from the turn off Route 197. 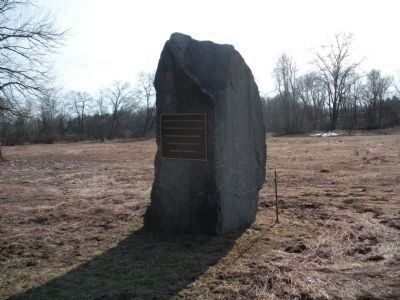 Photographed By John Farrell, March 28, 2009
2. Progenitors of Independence Monument
This monolithic monument is a short distance south of the statue of Major Robert Rogers.

Click or scan to see
this page online
Rogers Island offers well-preserved history lessons. An article by Richard Frost, published in the Press Republican on October 28, 2008. (Submitted on April 13, 2009, by Kevin W. of Stafford, Virginia.) 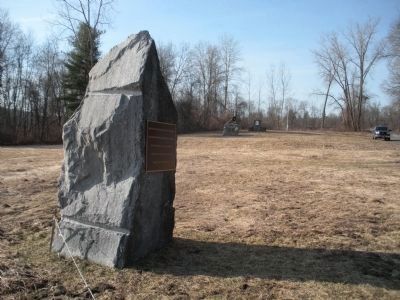