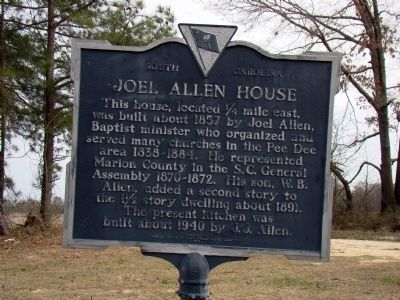 Photographed By J. J. Prats, February 26, 2009
1. Joel Allen House Marker
Inscription.
Joel Allen House. . This house, located ¼ mile east, was built about 1857 by Joel Allen, Baptist minister who organized and served many churches in the Pee Dee area 1838–1884. He represented Marion County in the S.C. General Assembly 1870–1872. His son, W.B. Allen, added a second story to the 1½ story dwelling about 1891. The present kitchen was built about 1940 by J.J. Allen. . This historical marker was erected in 1975 by Dillon County Historic Preservation Commission. It is in Centerville in Dillon County South Carolina

Topics. This historical marker is listed in this topic list: Notable Buildings. A significant historical year for this entry is 1857.

Other nearby markers. At least 8 other markers are within 6 miles of this marker, measured as the crow flies. Pine Hill A.M.E. Church / Pine Hill Rosenwald School 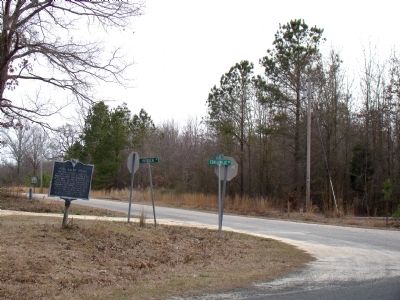 More about this marker. House is off Historical Drive and can be seen across field.

Also see . . .  National Register of Historic Places Nomination Form (1974). Form prepared by Nenie Dixon and Clarence B. Allen. “The heart-pine farmhouse, painted white, is typical of the modest, yet well-built South Carolina upcountry house. Since its construction in 1857, the house has been owned by members of the Allen family, many of whom have made important contributions to the work of the Southern Baptist Church.

“Architectural Significance. The house is an example of the well-constructed farmhouse built in the South Carolina upcountry before the War Between the States. The adherance to symmetrical arrangement and the frank use of local materials are typical of antebellum vernacular architecture in the South. Solomon Sanderson, the local builder, assisted by two slaves, Kelly and Sandy McCrimmon, fashioned a sturdy structure based on a simple four room design. Although the house is unpretentious, the ability of the builder and craftsmen as well as the pride of the owner are expressed in decorative features like the parlor mantel and paneled wainscoting.

“Religion/Philosophy. Approximately one out of every three residents of South Carolina is Baptist, and the denomination has had an important influence on the state’s history. For three generations, members of the Allen family have been leaders in the Southern Baptist Church. In various capacities, as ministers, missionaries, authors, and editors, residents of the Joel Allen house have played major roles in determining the denomination's philosophy and policies.

“The original owner of the house, Joel Allen, was the minister of the Welsh Neck and Pee Dee Association for forty-five years. Having taken a stand against secession before the War Between the States, Allen was elected to the South Carolina House of Representatives in 1868. His son Joel I. Allen, helped organize, and later served as pastor of, the First Baptist Church of Dillon, South Carolina. Responsible for raising $100,000 for Furman Univer-sity in 1903, Allen was commended in a resolution by the University's Board of Trustees.

“A third generation of Allens who grew up in the heart-pine farmhouse included four who continued the family tradition of being involved with the Southern Baptist Church. Eunice Allen served with her husband as a missionary to Brazil. Three of her brothers, W.C. Allen, Benjamin F. Allen, and Clifton J. Allen, all ordained ministers, were honored by Furman University with the Doctor of Divinity degree. In addition to his pastoral work, W.C. Allen served as editor of the Baptist Courier, a denominational newspaper with state-wide circulation, and as vice-president of the Southern Baptist Convention in 1940. He wrote several church histories, History of Pee Dee Baptist Association ‘Manuscript for a Brief History of Baptists of South Carolina’ and History of First Baptist Church, Columbia, South Carolina.

“For fifty-six years a pastor of Baptist churches in South Carolina, Benjamin F. Allen was author of History of The First Baptist Church, Marion, South Carolina. and served as chairman of the South Carolina Baptist Convention.

Editor’s want-list for this marker. Photos of the house • Can you help?
Share this page.