In Memory of the Unknown Soldiers 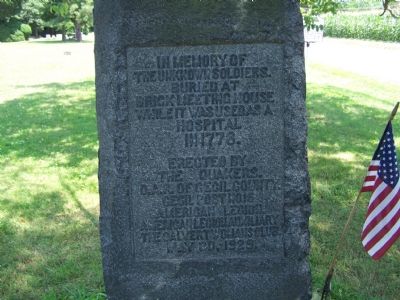 By William Pfingsten, July 14, 2007
1. In Memory of the Unknown Soldiers Marker
Inscription.
In memory of the Unknown Soldiers buried at Brick Meetinghouse while it was used as a hospital in 1778. . This historical marker was erected in 1929 by The Quakers, DAR of Cecil County, Cecil Post No. 15 American Legion, American Legion Auxiliary, The Calvert Woman. It is Near Rising Sun in Cecil County Maryland

In memory of the Unknown Soldiers buried at Brick Meetinghouse while it was used as a hospital in 1778.

Location. 39° 42.023′ N, 75° 58.925′ W. Marker is near Rising Sun, Maryland, in Cecil County. Marker can be reached from Brick Meeting House Road 0.2 miles west of Maryland Route 272. Marker is in the Quaker Cemetery and marked with two small American flags. Touch for map. Marker is in this post office area: Rising Sun MD 21911, United States of America. Touch for directions.

Other nearby markers. At least 8 other markers are within 6 miles of this marker, measured as the crow flies. Brick Meeting House (within shouting distance of this marker); Calvert Village (approx. 0.2 miles away); Blue Ball Tavern (approx. 2.7 miles away); The Nottingham Lots (approx. 3 miles away); Gilpin’s Falls Covered Bridge 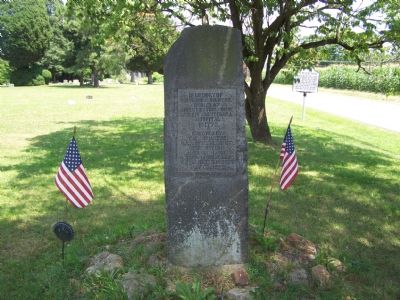