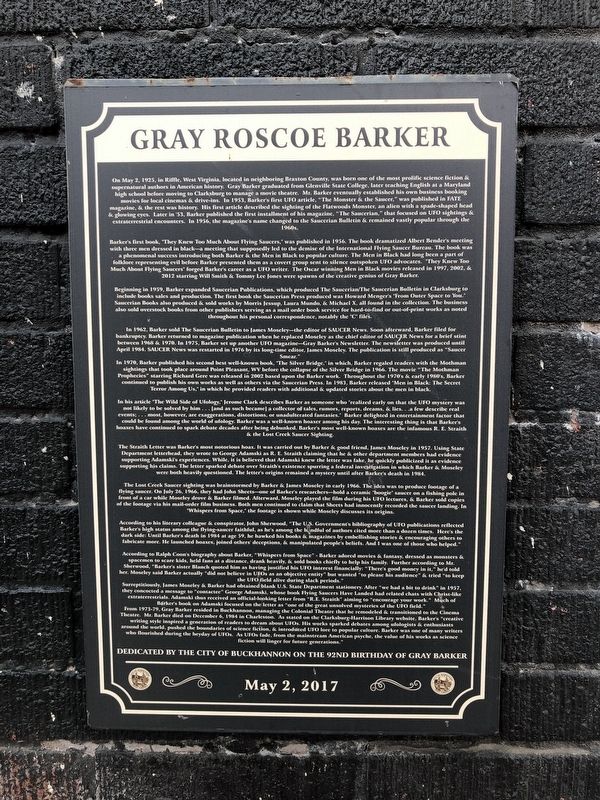 On May 2, 1925, in Riffle, West Virginia, located in neighboring Braxton County, was born one of the most prolific science fiction & supernatural authors in American history. Gray Barker graduated from Glenville State College, later teaching English at a Maryland high school before moving to Clarksburg to manage a movie theatre. Mr. Barker eventually established his own business booking movies for local cinemas & drive-ins. In 1953, Barker's first UFO article, "The Monster & the Saucer," was published in Fate magazine, & the rest was history. His first article described the sighting of the Flatwoods Monster, an alien with a spade-shaped head & glowing eyes. Later in '53, Barker published the fist installment of his magazine, "The Saucerian," that focused on UFO sightings & extraterrestrial encounters. In 1956, the magazine's name changed to the Saucerian Bulletin & remained vastly popular through the 1960s.

Barker's first book, "They Knew Too Much About Flying Saucers," was published in 1956. The book dramatized Albert Bender's meeting with three men dressed in black—a meeting that supposedly led to the demise of the International 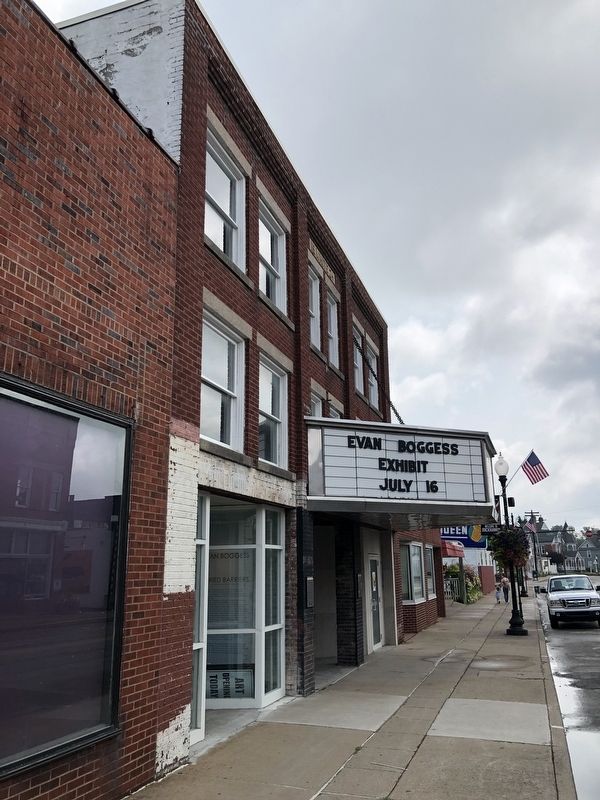 Click or scan to see
this page online
Flying Saucer Bureau. The book was a phenomenal success introducing both Barker & the Men in Black to popular culture. The Men in Black had long been a part of folklore representing evil before Barker presented them as a covert group sent to silence outspoken UFO advocates. "They Knew Too Much About Flying Saucers" forged Barker's career as a UFO writer. The Oscar winning Men in Black movies released in 1997, 2002, & 2012 starring Will Smith & Tommy Lee Jones were spawn of the creative genius of Gray Barker.

Beginning in 1959, Barker expanded Saucerian Publications, which produced The Saucerian/The Saucerian Bulletin in Clarksburg to include books sales and production. The first book the Saucerian Press produced was Howard Menger's "From Outer Space to You." Saucerian Books also produced & sold works by Morris Jessup, Laura Mundo, & Michael X, all found in the collection. The business also sold overstock books from other publishers serving as a mail order book service for hard-to-find or out-of-print works as noted throughout his personal correspondence, notably the "C" files.

In 1962, Barker sold The Saucerian Bulletin to James Moseley—the editor of Saucer News. Soon afterward, Baker filed for bankruptcy. Barker returned to magazine publication when he replaced Moseley as the chief editor of Saucer News for a brief stint between 1968 & 1970. In 1975, Barker set up another UFO magazine—Gray Barker's Newsletter. The newsletter was produced until April 1984. Saucer New was restarted in 1976 by its long-time editor, James Moseley. The publication is still produced as "Saucer Smear."

In 1970, Barker published his second best well-known book, "The Silver Bridge," in which, Barker regaled readers with the Mothman sightings that took place around Point Pleasant, WV before the collapse of the Silver Bridge in 1966. The movie "The Mothman Prophecies" starring Richard Gere was released in 2002 based upon the Barker work. Throughout the 1970's & early 1980's, Barker continued to publish his own works as well as others via the Saucerian Press. In 1983, Barker released "Men in Black: The Secret Terror Among Us," in which he provided readers with additional & updated stories about the men in black.

In his article "The Wild Side of Ufology," Jerome Clark describes Barker as someone who "realized early on that the UFO mystery was not likely to be solved by him…[and as such became] a collector of tales, rumors, reports, dreams, & lies…a few describe real events…most, however, are exaggerations, distortions, or unadulterated fantasies." Barker delighted in entertainment fact of that could be found among the world of ufology. Barker was a well-known hoaxer among his day. The interesting thing is that Barker's hoaxes have continued to spark debate decades after being debunked. Barker's most well-known hoaxes are the infamous R.E. Straith & the Lost Creek Saucer Sighting.

The Straith Letter was Barker's most notorious hoax. It was carried out by Barker & good friend, James Moseley in 1957. Using State Department letterhead, they wrote to George Adamski as R.E. Straith claiming that & other department members had evidence supporting Adamski's experiences. While, it is believed that Adamski knew the letter was a fake, he quickly publicized it as evidence supporting his claims. The letter sparked debate over Straith's existence spurring a federal investigation in which Barker & Moseley were both heavily questioned. The letter's origins remained a mystery until after Barker's death in 1984.

The Lost Creek Saucer sighting was brainstormed by Barker & James Moseley in early 1966. The idea was to produce footage of a flying saucer. On July 26, 1966, they had John Sheets—one of Barker's researchers—hold a ceramic 'boogie' saucer on a fishing pole in front of a car while Moseley drove & Barker filmed. Afterward, Moseley played the film during his UFO lectures, & Barker sold copies of the footage via his mail-order film business. Both men continued to claim that Sheets had innocently recorded the saucer landing. In "Whispers from Space," the footage is shown while Moseley discusses its origins.

According to his literary colleague & conspirator, John Sherwood, "The U.S. Government's bibliography of UFO publications reflected Barker's high status among the flying-saucer faithful, as he's among the handful of authors cited more than a dozen times. Here's the dark side: Until Barker's death in 1984 at age 59, he hawked his books & magazines by embellishing stories & encouraging others to fabricate more. He launched hoaxes, joined others' deceptions, & manipulated people's beliefs. And I was one of those who helped."

According to Ralph Coon's biography about Barker, "Whispers from Space" — Barker adored movies & fantasy, dressed as monsters & spacemen to scare kids, held fans at a distance, drank heavily, & sold books chiefly to help his family. further according to Mr. Sherwood, "Barker's sister Blanch quoted him as having justified his UFO interest financially: "There's good money in it," he'd told her. Moseley said Barker actually "did not believe in UFOs as an objective entity" but wanted "to please his audience" & tried "to keep the UFO field active during slack periods."

Surreptitiously, James Moseley & Barker had obtained blank U.S. State Department stationery. AFter "we had a bit to drink" in 1957, they concocted a message to "contactee" George Adamski, whose book Flying Saucers Have Landed had related chats with Christ-like extraterrestrials. Adamski thus received an official-looking letter from "R.E. Straith" aiming to "encourage you work." Much of Barker's book on Adamski focused on the letter as "one of the greatest unsolved mysteries of the UFO field."

From 1973-79, Gray Barker resided in Buckhannon, managing the Colonial Theatre that he remodeled & transitioned to the Cinema Theatre. Mr. Barker died on December 6, 1984 in Charleston. As stated on the Clarksburg Harrison Library website, Barker's "creative writing style inspired a generation of readers to dream about UFOs. His works sparked debates among ufologists & enthusiasts who flourished during the heyday of UFOs. As UFOs fade, from the mainstream American psyche, the value of his works as science fiction will linger for future generations."

Topics. This historical marker is listed in this topic list: Arts, Letters, Music. A significant historical month for this entry is April 1984.