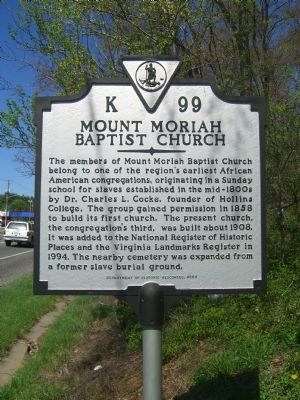 By Kevin W., April 12, 2009
1. Mount Moriah Baptist Church Marker
Inscription.
Mount Moriah Baptist Church. . The members of Mount Moriah Baptist Church belong to one of the region's earliest African American congregations, originating in a Sunday school for slaves established in the mid-1800s by Dr. Charles L. Cocke, founder of Hollins College. The group gained permission in 1858 to build its first church. The present church, the congregation's third, was built about 1908. It was added to the National Register of Historic Places and the Virginia Landmarks Register in 1994. The nearby cemetery was expanded from a former slave burial ground. . This historical marker was erected in 2000 by Department of Historic Resources. It is in Roanoke Virginia

The members of Mount Moriah Baptist Church belong to one of the region's earliest African American congregations, originating in a Sunday school for slaves established in the mid-1800s by Dr. Charles L. Cocke, founder of Hollins College. The group gained permission in 1858 to build its first church. The present church, the congregation's third, was built about 1908. It was added to the National Register of Historic Places and the Virginia Landmarks Register in 1994. The nearby cemetery was expanded from a former slave burial ground.

Topics and series. This historical marker is listed in these topic lists: African Americans • Cemeteries & Burial Sites • Churches & Religion. In addition, it is included in the Virginia Department of Historic Resources series list. A significant historical year for this entry is 1858. 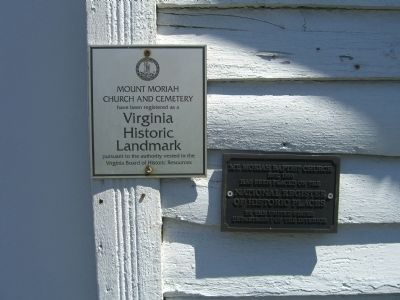 By Kevin W., April 12, 2009
2. Other Mount Moriah Baptist Church Markers
Mount Moriah is listed as both a Virginia Historic Landmark and in the National Register of Historic Places.

Click or scan to see
this page online
Avenue. Touch for map. Marker is at or near this postal address: 3521 Moriah Lane, Roanoke VA 24012, United States of America. Touch for directions.

Related marker. Click here for another marker that is related to this marker. Dr. Charles Cocke is the founder of Hollins Institute.

Additional commentary.
1. Mount Moriah Baptist Church Informational Handout
I received an informational handout at the time of my visit, the text of which follows. A picture of the two sided handout is included 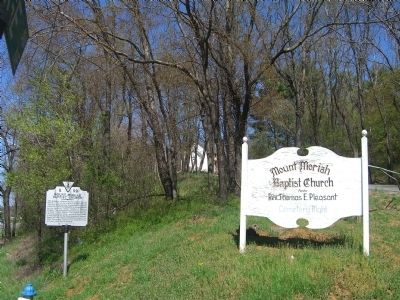 By Kevin W., April 12, 2009
3. Mount Moriah Baptist Church and Marker
Mount Moriah Church can be seen up the hill in the background.
below.

"In 1842 Dr. Charles Lewis Cocke founded the Hollins Institute which grew into the present Hollins University.

"During this time Dr. Cocke owned an estimated twenty slaves. He wanted them to read and learn about the Bible so he organized classes for them. He took his slaves by covered wagon at night to have classes on Mr. G. G. Gish’s Land.

"During 1858 a small group of Dr. Cocke’s slaves contacted Mr. Gish and asked for permission to build a brush harbor on a small portion of his land to conduct religious service. The request was granted. The Brush-Harbor was built in March. The group met there more than five years, after which, Mr. Gish and Mr. Woods gave them a small tract of land and slabs to build a small church.

"The earliest historic record confirms the founding of the church prior to 1873. The church today is the same church built eighty-five or more years ago. Mr. Woods’ descendants still support the church.

"African Baptist Church was built on the main road. The state bought the property to build a highway and moved the church to the hill above. At that time the name was changed to the present Mt. Moriah Baptist Church and Cemetery.

"In 1904 the church added a half acre tract to the cemetery. In 1908 Mrs. Hackley purchased a tract of land from the School Board of Big Lick #3 and presented it to the church 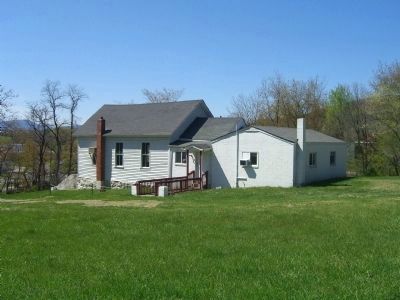 By Kevin W., April 12, 2009
4. Mount Moriah Baptist Church
as a gift. In July, 1993 bathrooms, a kitchen complete with cabinets, sink, water heater, table extension and water fountain were added along with a street sign named Moriah Lane, N.E. Thanks to Deacon Silas Witt.

"On May 11, 1994 Mt. Moriah Baptist Church and Cemetery were listed on the Virginia Landmarks Register. On September 20, 1994 each was listed on the National Register of Historic Places.

"Each 4th Sunday in July, Mt. Moriah has its annual rally which, with donations from Friends of Mt. Moriah, helps to support the church financially. We thank God for this blessing. 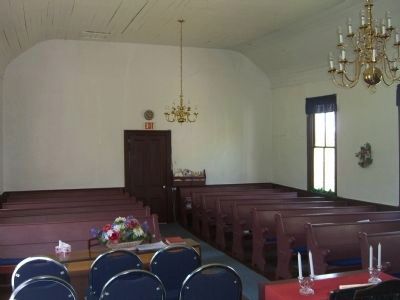 By Kevin W., April 12, 2009
5. Inside Mount Moriah Baptist Church
April 15, 2009, by Kevin W. of Stafford, Virginia.
2. A history lesson
Sometimes in the search for "Bite-Size Bits of Local History," you get a real history lesson. This correspondent had driven directly to the site of this marker from Hollins University, found quite by accident as I hadn't set out to travel in that direction when my journey started that day. I was unaware of the connection between the two sites until I arrived and read the history of the church. The coincidence took me quite by surprise.

While photographing this church and its marker, I was fortunate enough to meet Mount Moriah Church's current Pastor, the Rev. Thomas Pleasant, and two of the Deacons. It had been awhile since services had ended, but the three men were still outside of the church when I pulled in. The four of us wondered about what had brought me here directly from Hollins University, to a church made possible by the the founder of that very institution, and found them there to share its history long after they normally would have gone home. The time spent with these men provided me a collective history of the church from the eyes of its congregation and passed down over the years. It was a blessing I was but fortunate to receive this bright, sunny Easter Sunday afternoon.

The church had its beginnings when blacks weren't allowed 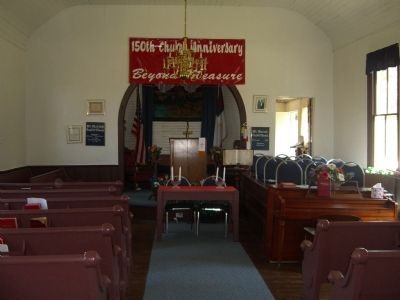 By Kevin W., April 12, 2009
6. Mount Moriah Baptist Church Pulpit
to attend church in Hollins, and Dr. Cocke encouraged the slaves to worship at this site. They'd travel for miles by whatever means they had available. Though for most of them that meant walking, Dr. Cocke would often bring some of them in his horse and buggy. Although the congregation was never very large, they were able to purchase the land and build three small houses of worship, the current one having survived over 100 years.

Two stories of devotion stand out in my memory of this short visit. The first is of the respect for the church by its members in its earliest years. Many church members would walk to the church in their bare feet. They would "save their shoes" for the church, putting them on when they got inside out of respect for God's house. The second story, though more recent, also speaks highly of its members' devotion. This one is about a woman who drove to the church early from her home several miles away. Before she left home, she would fill her trunk with rocks and use them to fill in deeper ruts in the road leading to the church, making it easier for others to travel up the steep hill.
— Submitted April 12, 2009, by Kevin W. of Stafford, Virginia. 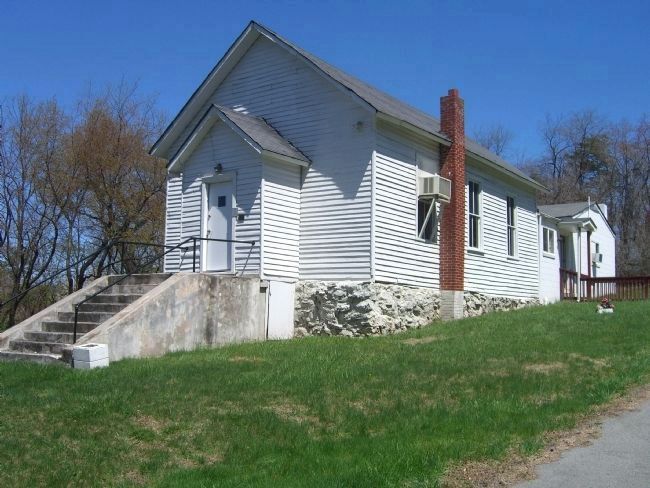 By Kevin W., April 12, 2009
7. Mount Moriah Baptist Church
The Virginia Historic Landmark and National Register of Historic Places plaques can be seen to the right of the front entrance door. 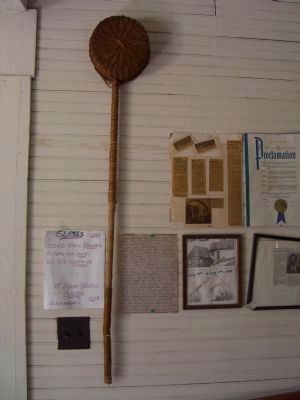 By Kevin W., April 12, 2009
8. Mount Moriah Baptist Church Offering Basket
This offering basket, one of two in the church's foyer, dates back to the origins of the church. They are the baskets used by slaves to take the money for the offering. 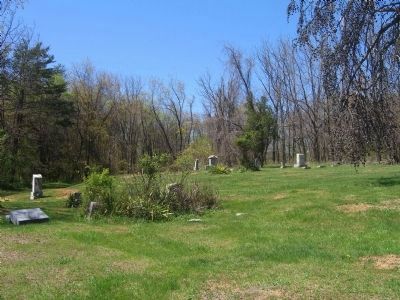 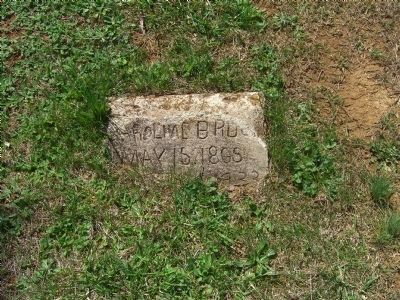 By Kevin W., April 12, 2009
10. Mount Moriah Baptist Church Cemetery
Many of the grave markers are unmarked. There are some, like this one, that are spartan in appearance and information. 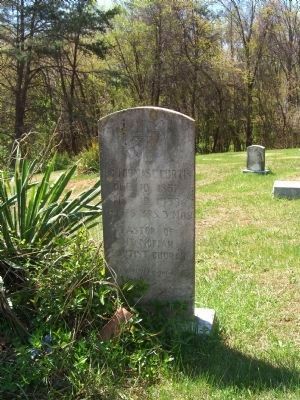 By Kevin W., April 12, 2009
11. Mount Moriah Baptist Church Cemetery
Others, like this one, show deep respect for important church members. This grave marker is for the Reverend Thomas C. Curtis, a former pastor of the church. 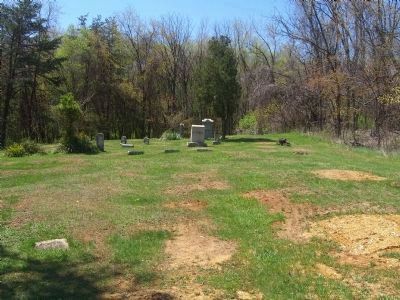 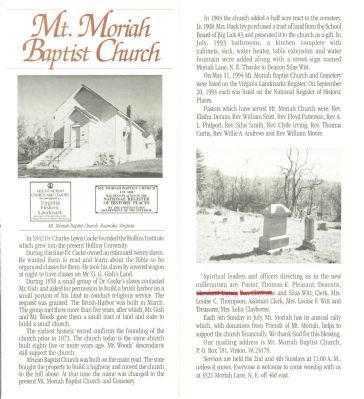