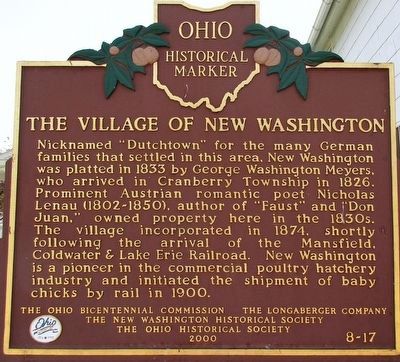 The Village of New Washington. Nicknamed "Dutchtown" for the many German families that settled in this area, New Washington was platted in 1833 by George Washington Meyers, who arrived in Cranberry Township in 1826. Prominent Austrian romantic poet Nicholas Lenau (1802-1850), author of "Faust" and "Don Juan," owned property here in the 1830s. The village incorporated in 1874, shortly following the arrival of the Mansfield, Coldwater & Lake Erie Railroad. New Washington is a pioneer in the commercial poultry hatchery industry and initiated the shipment of baby chicks by rail in 1900. 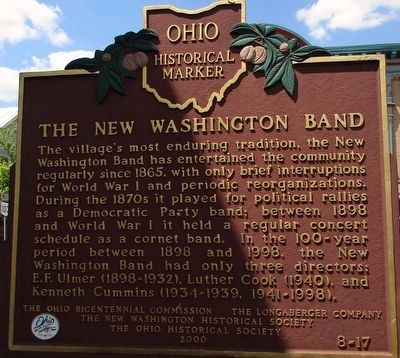 Topics and series. This historical marker is listed in these topic lists: Agriculture • Arts, Letters, Music • Railroads & Streetcars • Settlements & Settlers. In addition, it is included in the Ohio Historical Society / The Ohio History Connection series list.

Other nearby markers. At least 8 other markers are within 11 miles of this marker, measured as the crow flies. New Washington (approx. half a mile away); Village of Chatfield (approx. 4.7 miles away); Remembering Our Veterans of Early Wars (approx. 5.3 miles away); The Western Reserve (approx. 6.8 miles away); A Nurse’s Sacrifice in the Great War 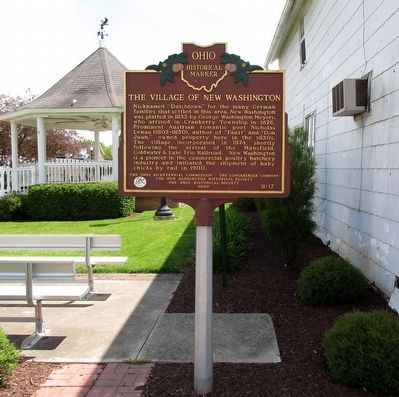 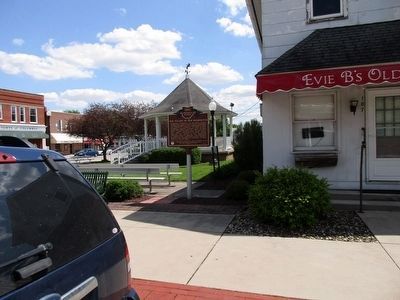